Arriving to Lima late in the evening, I had booked a night at an airport hotel before our 08.00am flight to Cusco, high in the Andes. At Cusco, we were met by Pablo, who taxied us 90 minutes into the Sacred Valley. 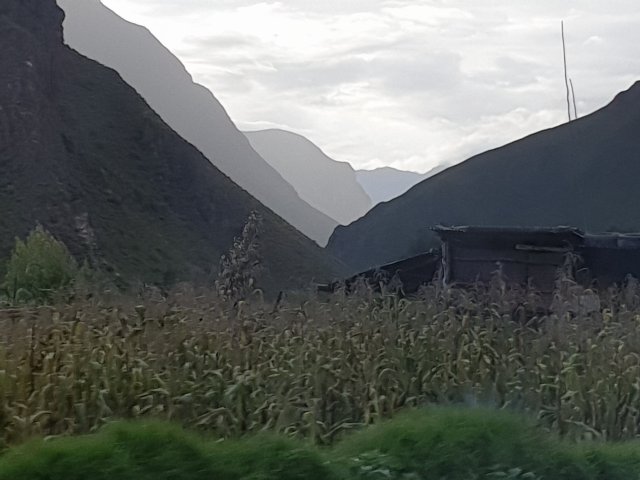 We were staying at a B&B called Lizzi Wasi, in Urubamba. Lizzi, from the US, is married to a Peruvian, and has created a fabulous oasis of rooms in lovely gardens, centrally located in the Sacred Valley. 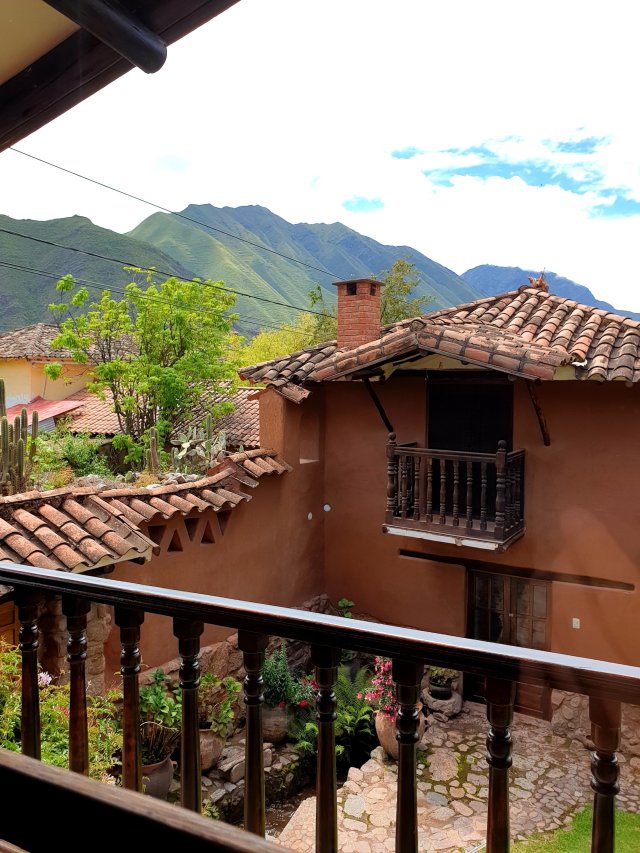 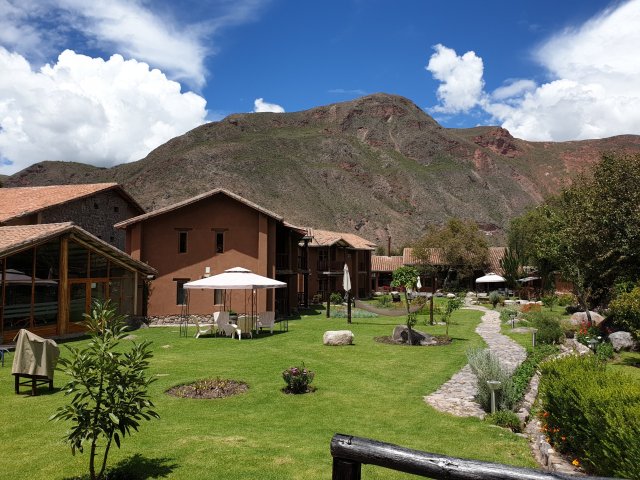 It is a perfect base from which to explore this Inca heartland, using fairly inexpensive taxis. Located at over 9,000 feet, we ‘rested’ for a few hours before our first trip, to Pisac. A charming village of cobbled streets, gardens and colourful local markets. 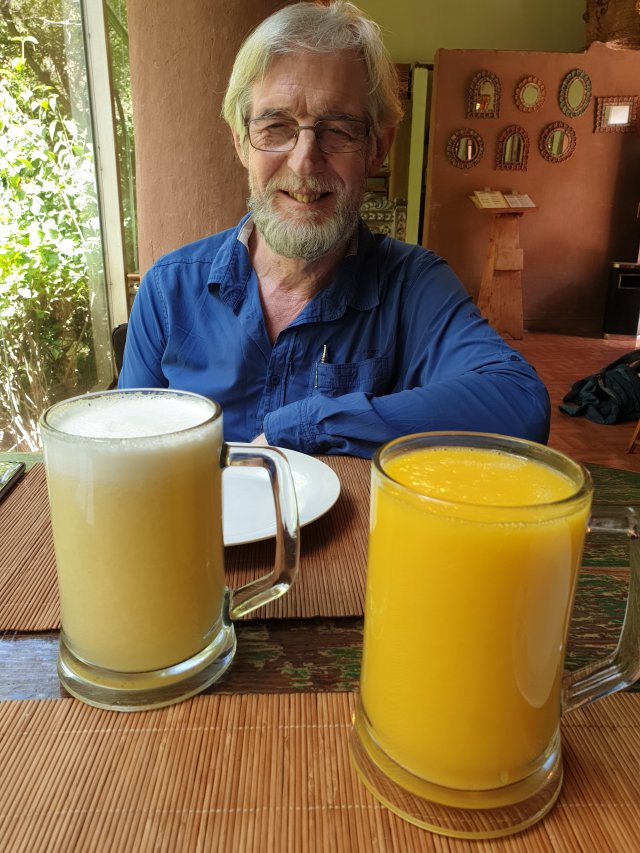 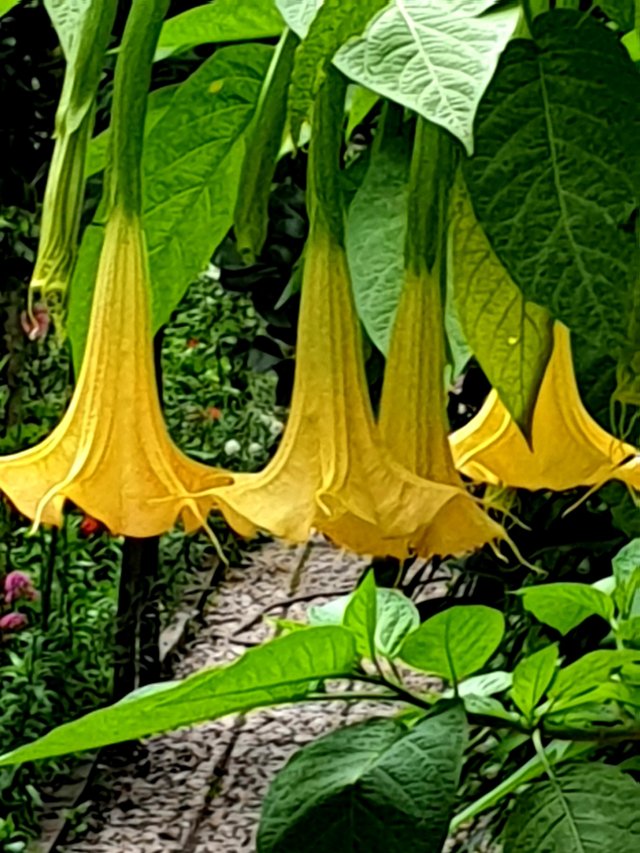 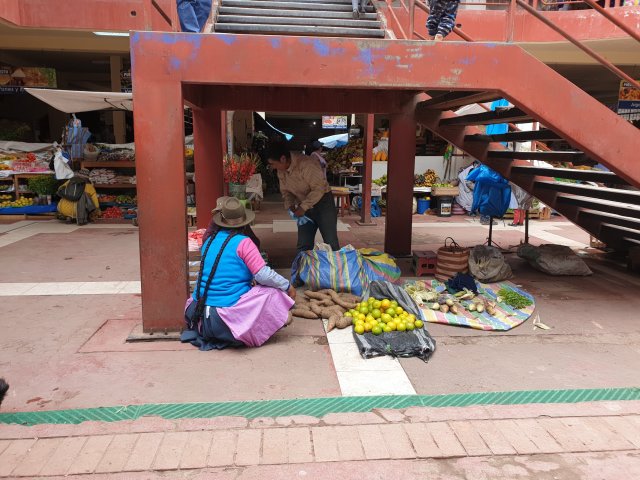 After a great lunch at Bistro Terra we drove up the steep valley sides until some remarkable Inca terracing came into view.

We climbed impossibly higher until we reached the old Inca settlement. Walking to the top made us feel about 120 yeas old, as we huffed and puffed due to the altitude. It was incredible to see.

The Incas were active here between 1425 and 1540. They had no written language, and had not invented the wheel, yet their settlements involved transporting building materials over great distances, and up huge mountains, and were quite sophisticated, especially in their water transportation and bathing arrangements! This was a line of separate pools!

This hillside was the cemetery. Each hole is a burial site.

Back to Lizzi Wasi for a good night’s sleep, but en route we also saw many Adobe blocks and Adobe houses being built in the countryside. 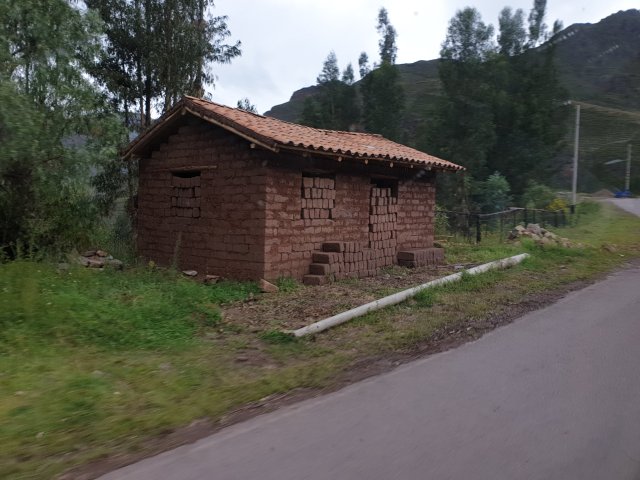 Next morning, off to see 3 major Inca sites. The fortress and town at Ollantaytambo was huge and impressive. Climbing to the top was exhausting, but rewarding! 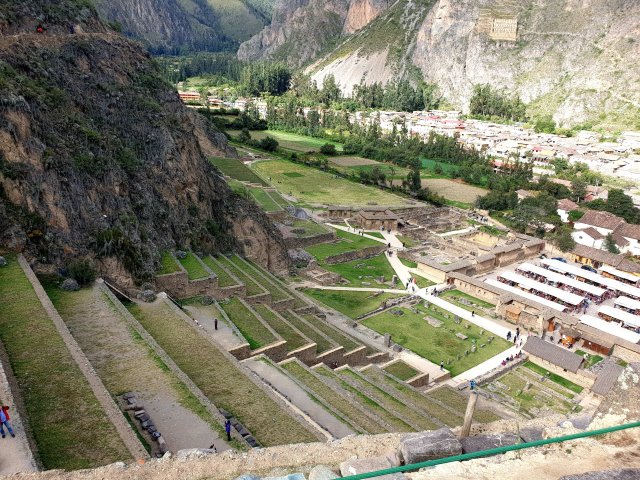 Again, the bathing areas were sophisticated.

The most remarkable structure is the temple de la sol which was never finished. Unused granite slabs litter the ground, and 6 huge monoliths create a wall. However did they get these up here? 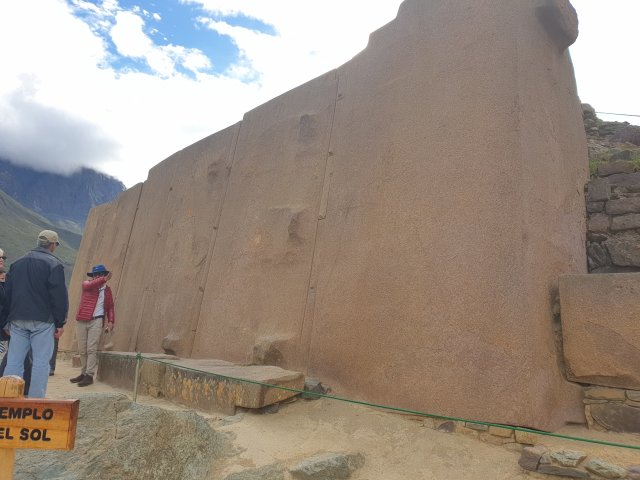 This is the huge wall which was built to block the valley, and which they used to dam the river and then flood the valley, in the Incas only significant victory over the advancing Spaniards.

Here we also visited a charity for girls that a friend had worked at some years before. Girls in poor, remote communities in the high Andes often receive no education at all. Thanks to the Sacred Valley Project, they can stay in dormitories under the care if a house mother, go to school and have help with their homework. We were made really welcome! 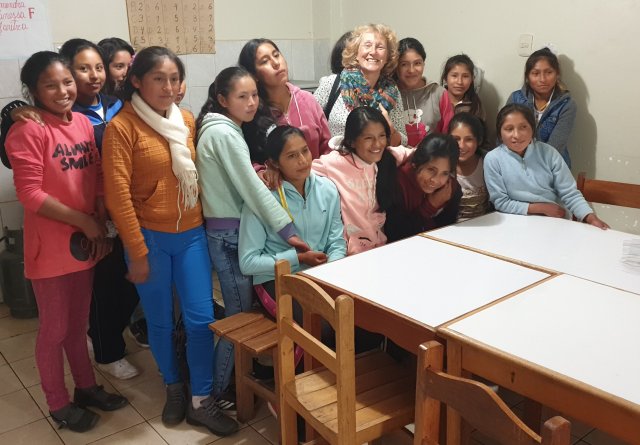 We also drove high into the mountains again to visit 2 incredible sites. Firstly the Maras Salt mines. A spring here has an unusually salty composition. Since 200 AD local pre-inca people have recognised the potential, and created over 5000 mini salt pans, in terraces down the mountainside. 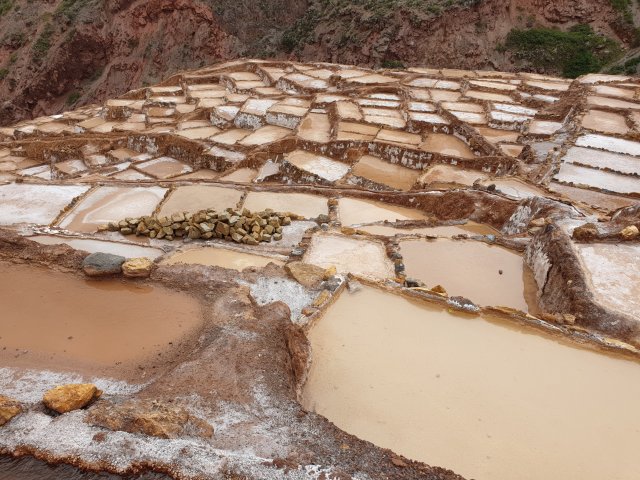 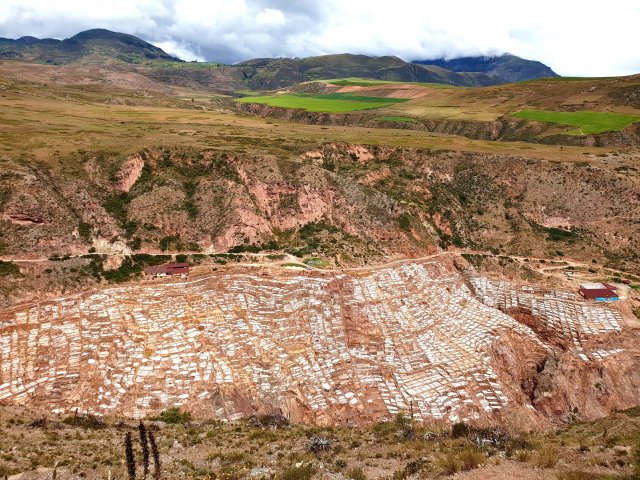 Over 3,000 are still worked today, and demand is now global. Pink Himalayan salt is hailed as the most healthy, and a recent study has shown that the Pink salt from here is even better! All the pans are still worked by hand, and it was like taking a step back in time nearly 2,000 years! The photos do not do the enormous scale of this justice. From here, we drove to Moray, where another remarkable Inca creation was cut into the earth. 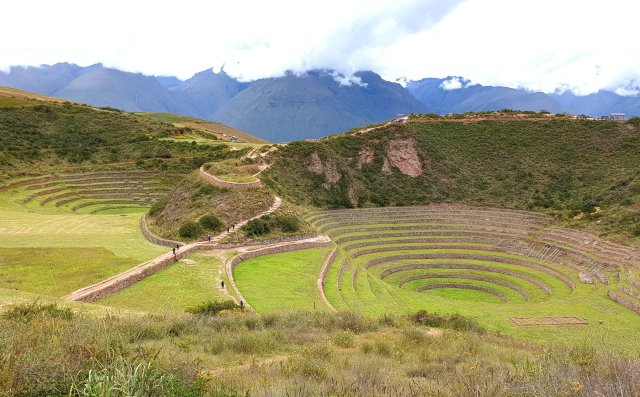 To Get an idea of scale, look for the people in the above picture!!

Much larger, and deeper than the pictures show, this incredible construction appears to have a scientific purpose. It is exposed to all aspects of the sun, shade and wind, and has temperature differences of up to 15 degrees difference from top to bottom. There are various theories as to its purpose, but soil, seed and plant traces have been found on different levels, and different orientations. Most scientists believe that this was an agricultural laboratory for testing crops in different soil’s and microclimate, so they could make the best use of each part of the empire. Even more remarkably, there is evidence that they practised hybridization, developing new strains of vegetables like potatoes that were better suited to prevailing conditions. The outcome is that Peru has over 4,000 varieties of Potato, and they feature in some way in most meals. We were left so impressed by everything we had seen today.

An early start on Wednesday saw us driving back to Ollantaytambo to catch the train to Aguas Calientes, and Machu Picchu. The weather forecast was bad so we prepared ourselves for looking at low cloud and rain and saying “Well that is where it should be!”

The train journey follows the Sacred Valley and was stunning at every turn.

Aguas Calientes reminded us of an Alpine village with cute bins! 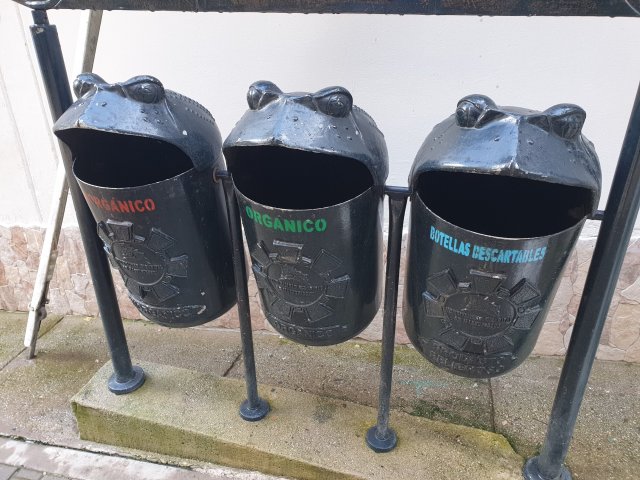 It’s little church had an Andean take on the traditional Mary and Jesus statue!

We had to queue for buses to drive up the mountain at our set entry time. The flow of visitors is always increasing – potentially over 2 million visitors per year – and the authorities and UNESCO are constantly battling between protection of this modern wonder of the world, and commercial profitability. We could see the clouds gathering as we ascended and we just hoped the rain would hold off for a while. The road twisted and turned, climbing steadily for 30 minutes. Surely nothing could be up here?

Then, we glimpsed a few terraces, still high above us, with the valley far below.

On entering the site, we chose to climb high above it, up towards the Sun gate, and then walk in down the old Inca trail, seeing it as the original visitors would have done. 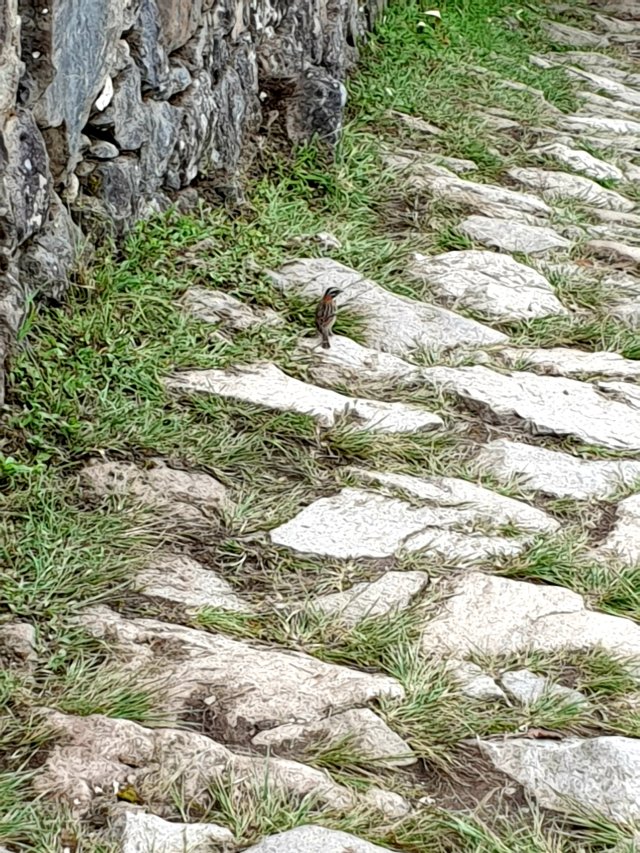 This was a great choice. The view from above really gives you a sense of how remarkable this lost city is. I confess, I became quite emotional! 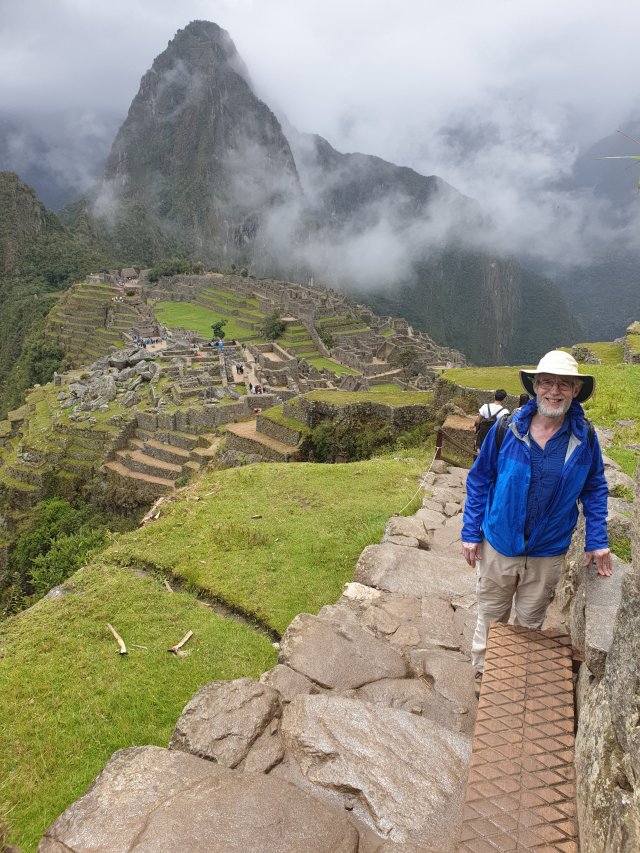 The city was abandoned in 1572 as the Incas fled from the Spanish, who never found it, and it remained undiscovered until the American, Hiram Bingham arrived in 1911. Well, undiscovered except for the 2 tribal families who were living here, totally unaware of it’s significance!! Sadly, during excavations, the treasures were removed and taken to museums around the world, but the city is still remarkably complete.

As we descended to the city itself, the heavens opened, but it allowed us to see Machu Picchu in all her colours, and it was truly atmospheric as cloud swirled around.

Our guide thought looking for shelter was unnecessary, so we learned about life here while getting progressively wetter.

(It didn’t help that one of my boots had torn in Tierra del Fuego, and the repair was failing, AND my trusty Berghaus waterproofs decided 12 years was enough and sprang some leaks!)

Machu Picchu contains housing, temples, meeting areas and an extensive agricultural section of terraces cascading down. They had complex irrigation and drainage systems which we witnessed in action, as water cascaded through gullies and into a central canal. Inca building techniques are remarkable. Machu Picchu was built without metal tools, the wheel or mortar! Granite is cut along natural fault lines, and then polished into blocks using coarse sand. They are smooth, and are fitted together with no mortar at all. The walls all recline slightly, for earthquake resistance! 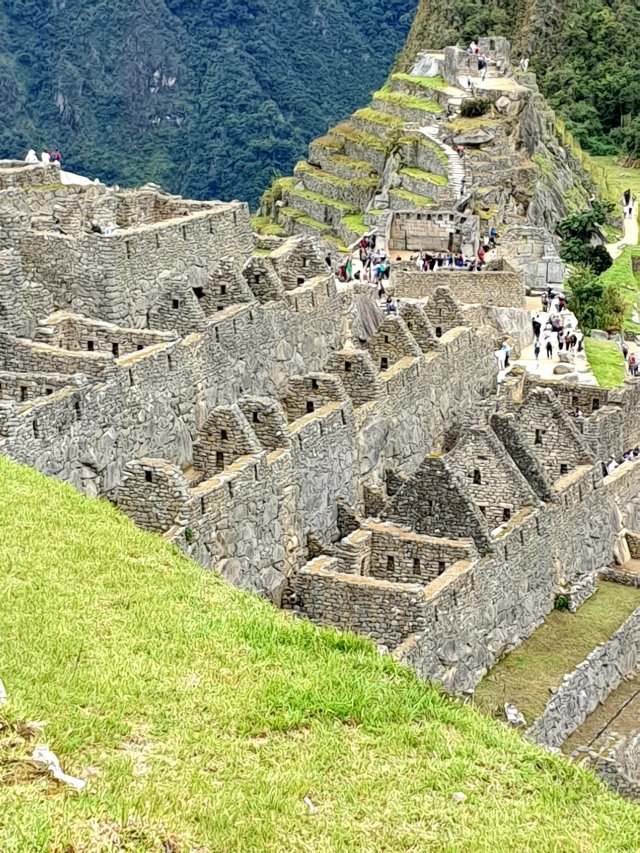 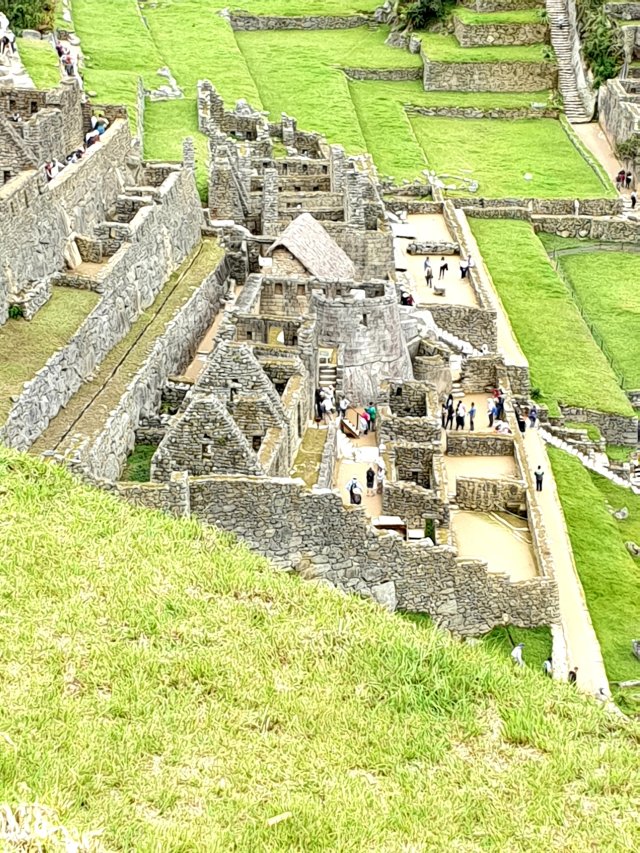 Astrology and earth rhythms play a huge role in Inca culture. Temples are built to receive shafts of sun through windows on solstice and equinox days . These were used as signs for the next agricultural season. Planting, harvesting etc.

This immense sundial was used in the same way. Unfortunately visitors cannot get close to it, after it was broken by a crane falling on it during the filming of a beer commercial in 2000.

This was a sacrificing table.

This was the temple of the Condor.

This huge slab is cut to be the shape of the sacred mountain behind.

We left this amazing site in mid afternoon, completely awestruck. We had 3 hours to wait for our train back, so we found Mapacho, a recommended cafe / craft brewery, and decided to have a 3 course meal, to spin out the time and let us warm up. Chris was very happy! 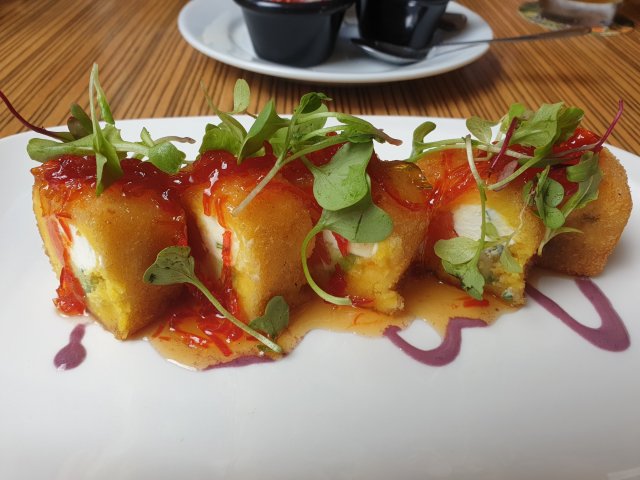 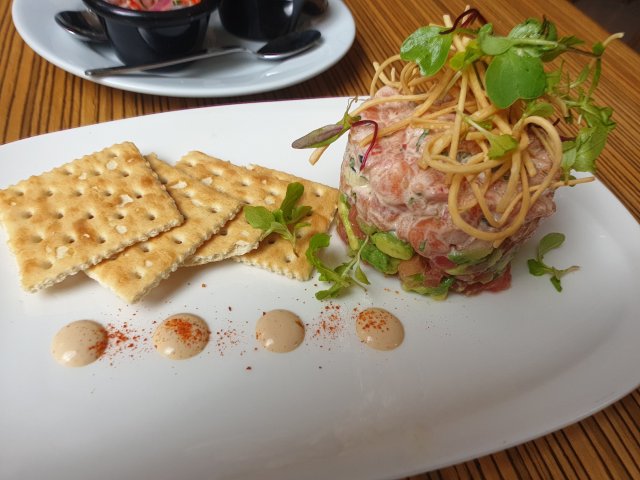 The Urubamba river was roaring past the open windows, adding drama!

We moved to the station waiting room, still dripping, and suddenly heard our names being called. On reporting to the man with clipboard and microphone, he told us with great delight that we had been upgraded to the first class carriage. ‘Ooh, comfy seats’ we thought! That was just the start. We were escorted to a Pullman carriage, luxuriously furnished…. and to a table set for dinner! We were served a complimentary 3 course dinner, with Pisco sours, wine and after dinner drinks all included! Despite having eaten a few hours before, we did our best! 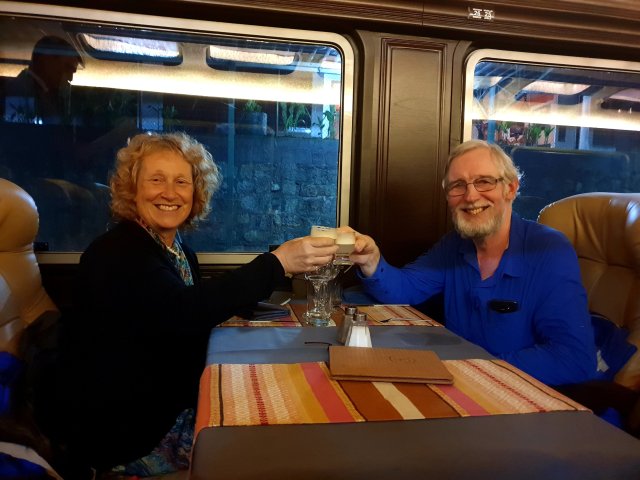 It was a delightful end to a wonderful day. We ❤ Peru!