From lush greenery and peaceful bird filled mountains, we took connecting flights via Bogota to Rio de Janeiŕo. We flew in over the huge bay, at 5.30am on a cloudy rainy morning. We had just 1 night in Rio so had to make the most of our time here, despite a serious lack of sleep. We got to our hotel, the lovely Ipanema Inn, at 8.20 am. Our guide Marcio, who I had found on TripAdvisor, arrived at 8.50! The rain stopped. “Come on”, he cried, “I have booked the train up the mountain to see Christ the Redeemer!”. We sped off in his car, driving past sandy Ipanema beach and then the more touristy Copacacbana beach, which still had some sand sculptures from Carneval. As we drove, Marcio shared his wealth of knowledge about the history and culture of Rio. 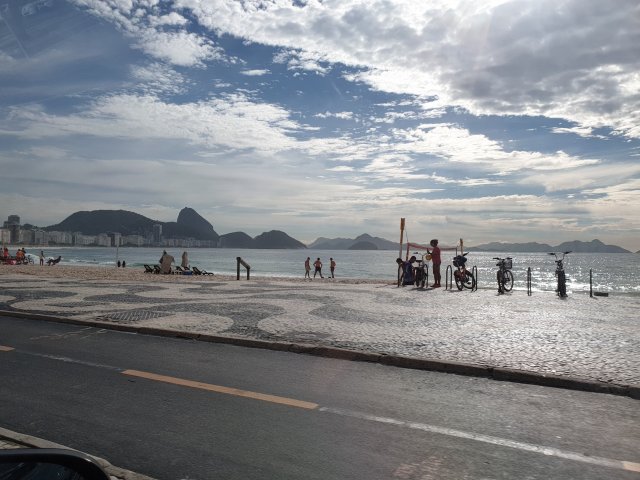 The girl from Ipanema, who inspired the song, is apparently still alive and in her eighties! Each neighbourhood has it’s own pattern of mosaic pavements

The cloud was slightly higher, but then a sudden rain shower would explode from the sky. We caught the funicular train up the 2,400 foot Mount Corcovado expecting to see very little. As we reached the top, the clouds parted, and there it was. The 100 foot high statue that has looked benevolently down at Rio from on high since 1931. 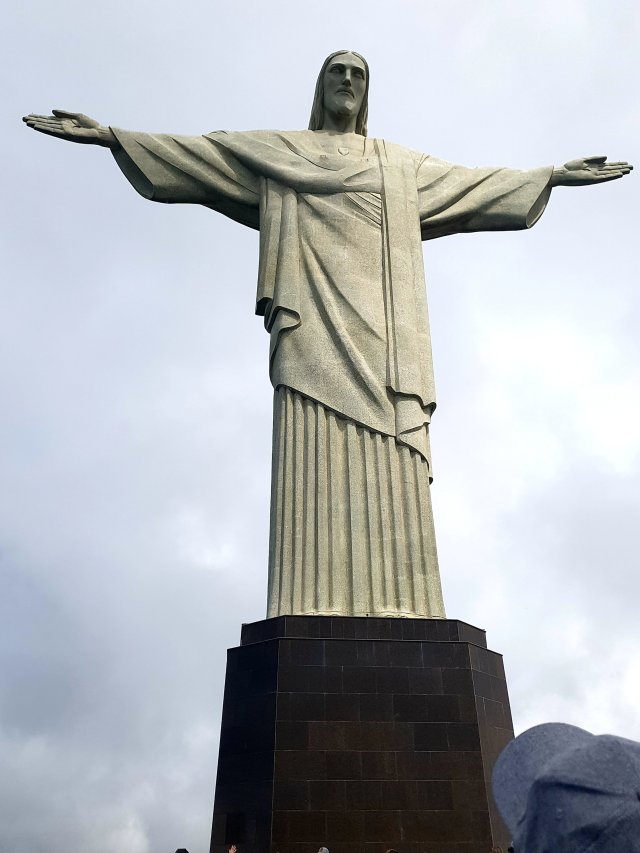 Its arms span 92 feet and had to be built without scaffolding! It is impressive, and a close look shows it is covered with a mosaic of soapstone tiles. The view is amazing, although Rio’s other famous high point, the Sugarloaf mountain, remained shrouded in cloud. 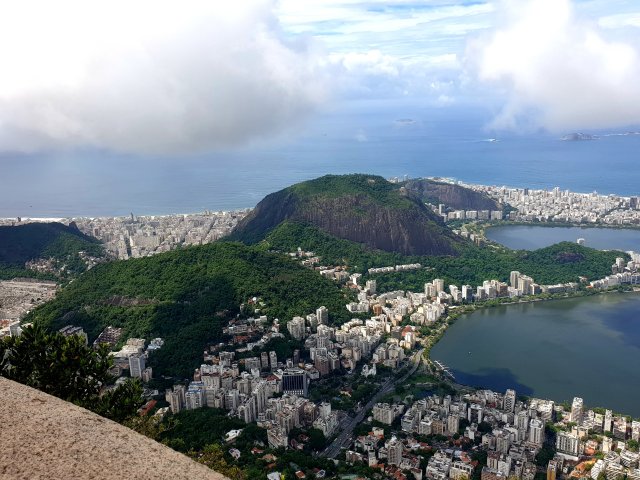 Also through cloud we saw the famous Maracana football stadium which holds the record for the largest attendance at a football match… 200,000 who watched the Unthinkable. Uruguay beat Brazil in the World Cup Final in 1950. Apparently the end of the match was characterised by stunned silence!!

Rio the city has a population of 6.4 million, and it threads it’s way between many high, forest clad mountains, a fact we had not appreciated. Many parts are white, highrise blocks, or houses, which contrast with the distinct, large, lower rise clusters of reddish buildings, which are the Favelas, there are over 100 of these districts in Rio. 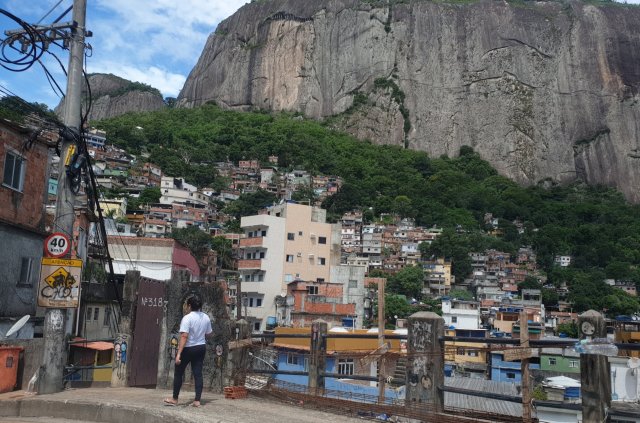 Favelas are historically where the poorer people live, and their key feature is that the people ‘squatted’ on the land, built a shack there, and then, after a certain number of years, gained the right to the land. Many of them built upwards, one room at a time. The favelas are mostly in less desirable parts of town, often climbing up mountainside, with just paths, not roads, although one ended up surrounded by grand buildings, and the land is worth a lot! Favelas were dangerous places, where cartels and gangs ruled, but a recent police initiative has apparently improved things in some of them. Favelas were also home to the Samba, and most dance schools are still located there. Marcio drove us through a favela as we went to Barra, a beautiful beach, which hardly anyone goes to because there aren’t enough bars and restaurants, and for the Brazilians, beach going is a big social event! 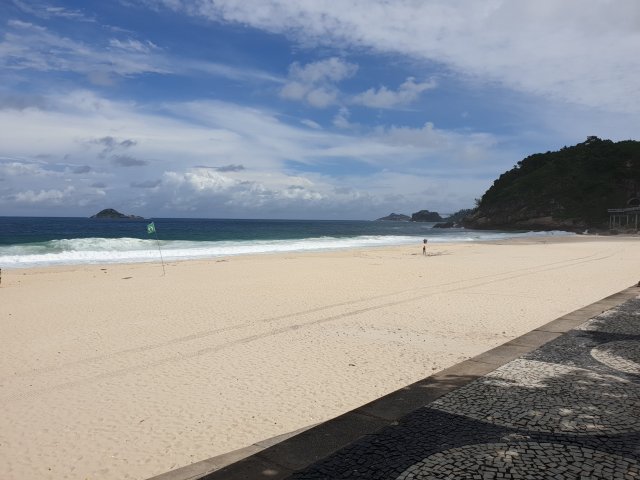 We visited Parque Lage , now a national park, a garden designed for a French family in 1840 by English landscape designer John Tyndale. He used local rainforest plants, but incorporated the very Victorian features of follies and grotto, complete with fake stalactites!! 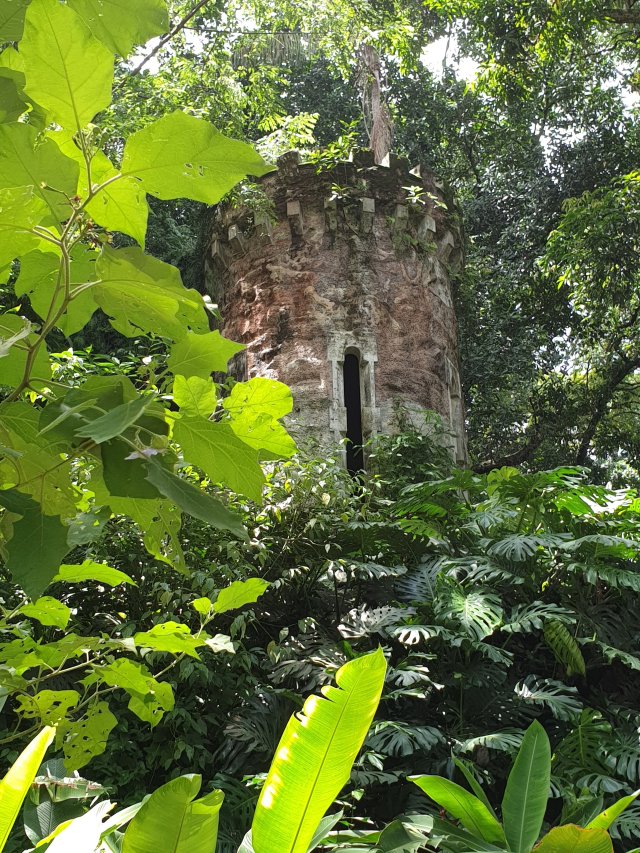 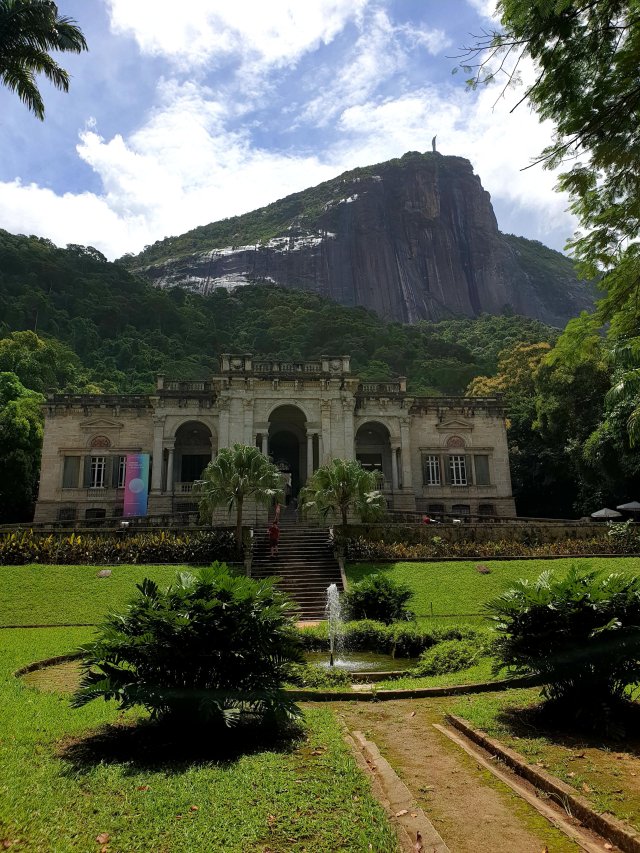 The house was lovely, with Christ the Redeemer towering behind it, and is used as an arts centre. On to Leblon, a lovely beach area, for lunch at a Kilo restaurant.

A huge serve yourself buffet, where your plate is weighed at the end, and you pay per gram! Desserts too! 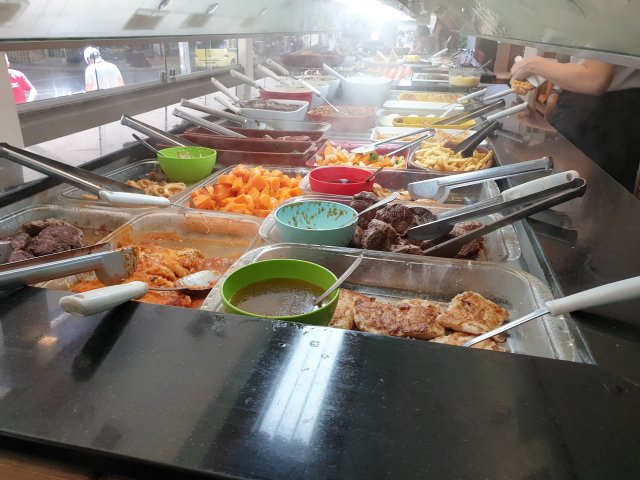 Fun and delicious! Then, as we walked and drove, Marcio pointed out beautiful churches, art deco buildings, museums, schools and military buildings, and the stunning theatre colon, many in grand architectural styles with heavy Spanish influence. 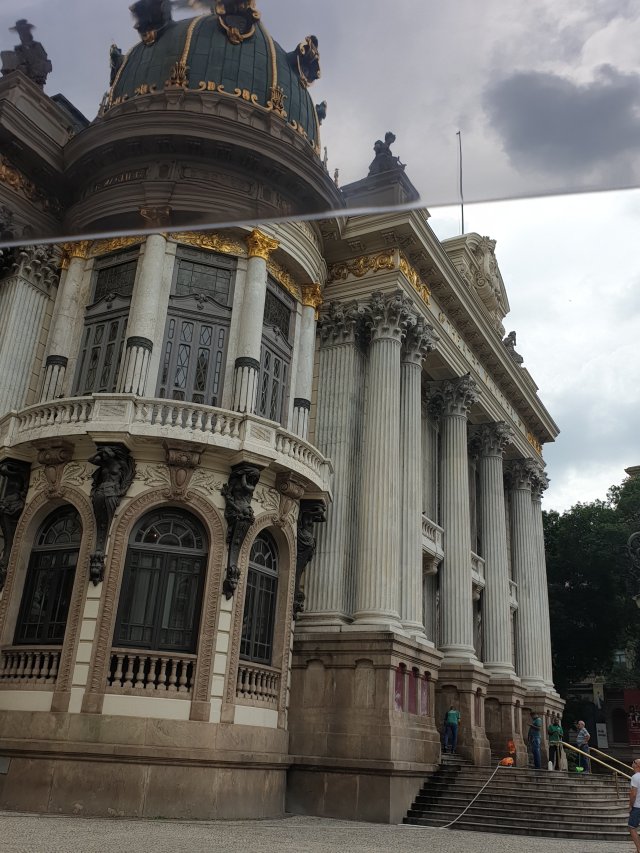 He explained how different groups had colonised the city over time, each bringing their culture and food. Tapas from the Spanish, different grains and breads from the native people . After Marcio left us, we walked on Ipanema beach under dramatic skies, and paddled in the south western Atlantic Ocean!

Then a fabulous supper at Zaza’s Bistro, and we collapsed into bed at 10.00! 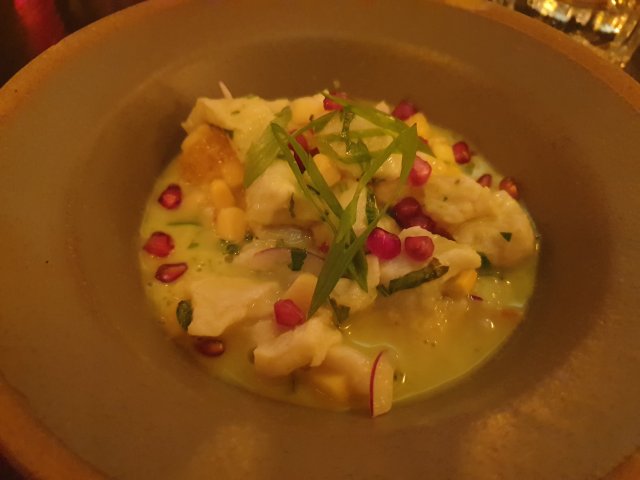 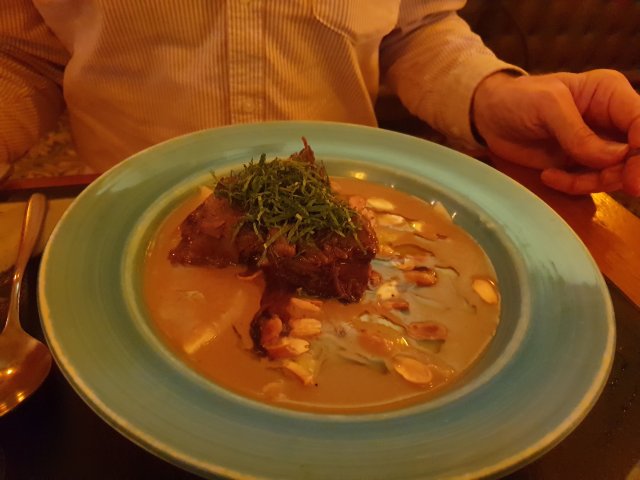 Next day, Marcio was back at 8.00am! We headed straight to Sugarloaf Mountain. So lucky. Today this was in clear sky, but Christ the Redeemer was completely hidden.

Two cable cars take you up 2000 feet to a great viewpoint over the bay, city and beaches. 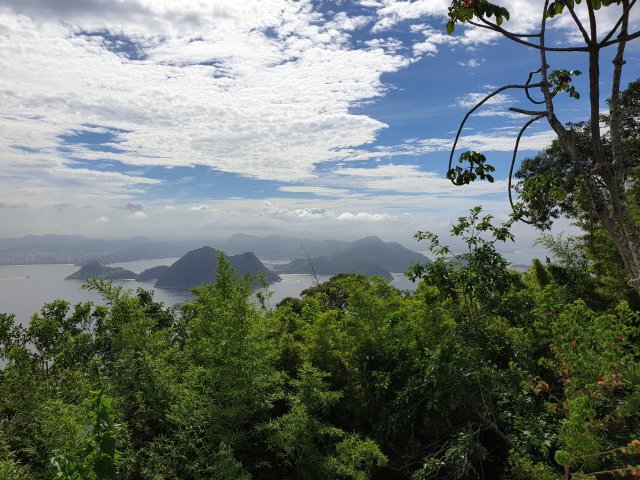 We then witnessed a miraculous apparition!! 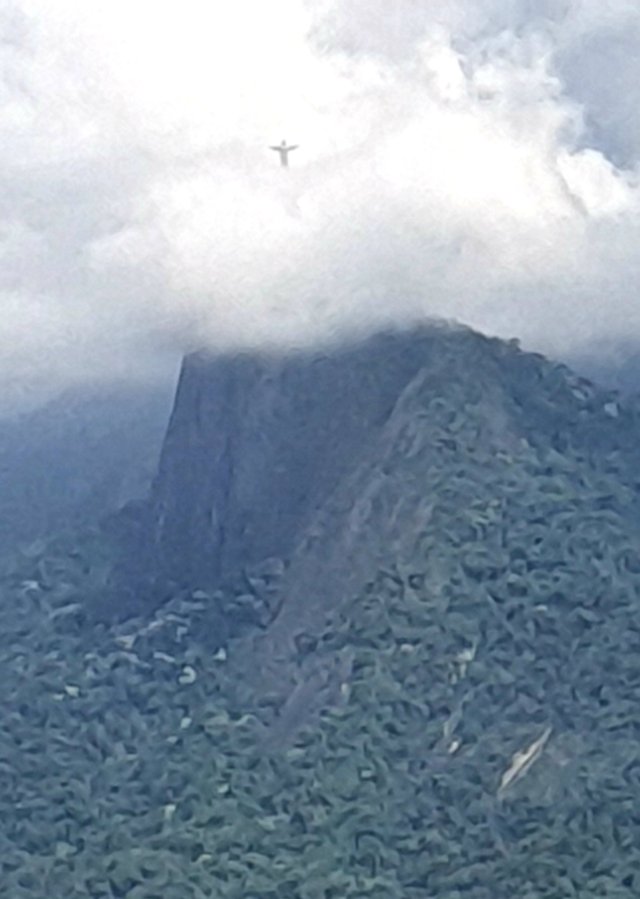 Then, we were taken to the centro, business district where modern skyscrapers mix with old streets and churches. The modern cathedral is, well, weird! Meant to represent a modern take on Mayan architecture, to us it was ghastly from outside, but strangely peaceful within, and holds 20,000 people! 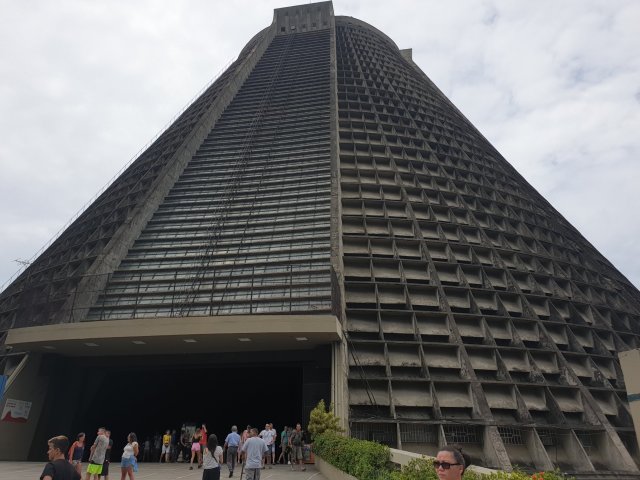 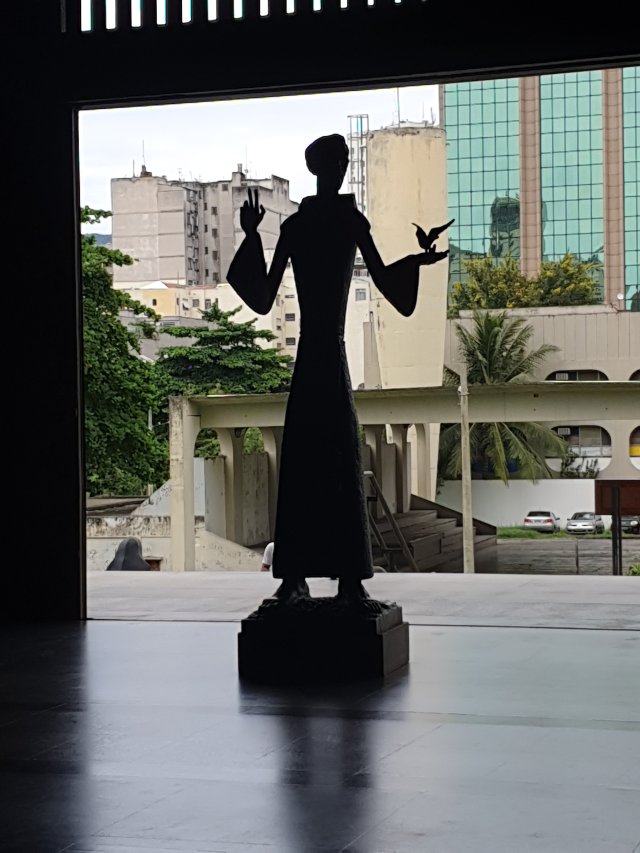 In contrast, we went to the Sao Bento church, built around 1600 as part of a monastery. It was stunning.

Then we visited the famous tiled steps, created gradually by artist Escadaria Selaron, who lived in a house on the steps. 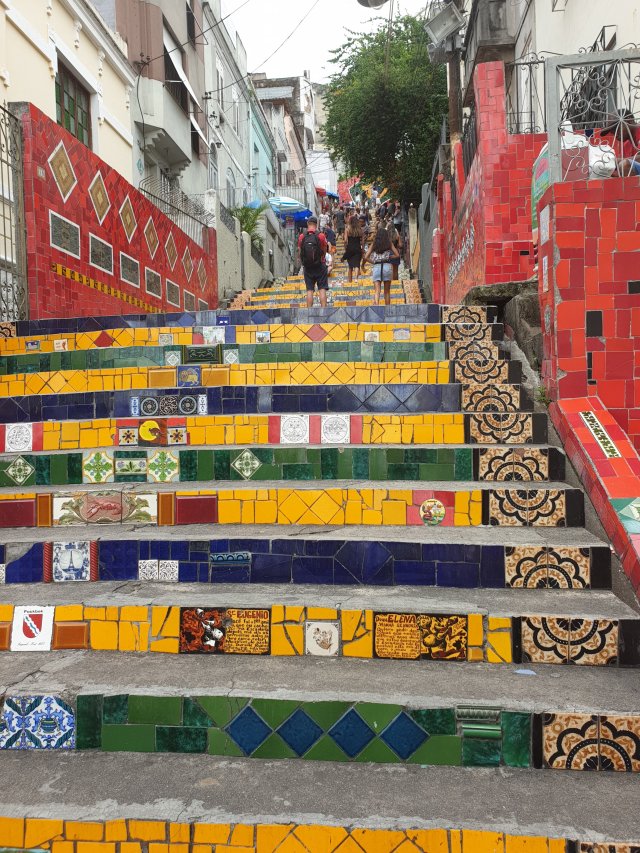 He became obsessed with his task, tiling the side walls as well, often with tiles from all around the world, sent by visitors. Sadly, a few years ago, he committed suicide on the steps, but they are hugely popular, (especially apparently since Snoop Dog visited!), and serve as his rather bizarre memorial.

A quick dash back to collect our cases, then off the the airport by 1.30!! We loved Rio, and, thanks to Marcio, saw an amazing amount in our short visit here!!