Next day was grey and threatened rain, so we had planned indoor activities. The first was the museum of Scottish lighthouses at Fraserburgh. Chris visited this while I went to the local heritage museum next door, which had really excellent and thoughtfully displayed exhibits covering the towns history and its inextricable links with fishing. This photo of the Herring fleet in the 1880’s was really striking.

It was a hard life for many. The men followed the Herring fleets and were away for months. The women fished at home, and did everything else too! I loved the description of the women who, if they had any spare fish, would walk to nearby towns carrying a heavy basket of fish on their backs, to barter for eggs or butter. So as not to waste time, they would knit as they walked!!

It was well planned for children too… on a replica ship you could winch in a creel of herring and sort them into barrels… I quite fancied a go but was about 50 years too old, so I gave it a miss! The stories of local people were very moving. These particularly caught my eye, so I’ve included them for you to read if you wish. 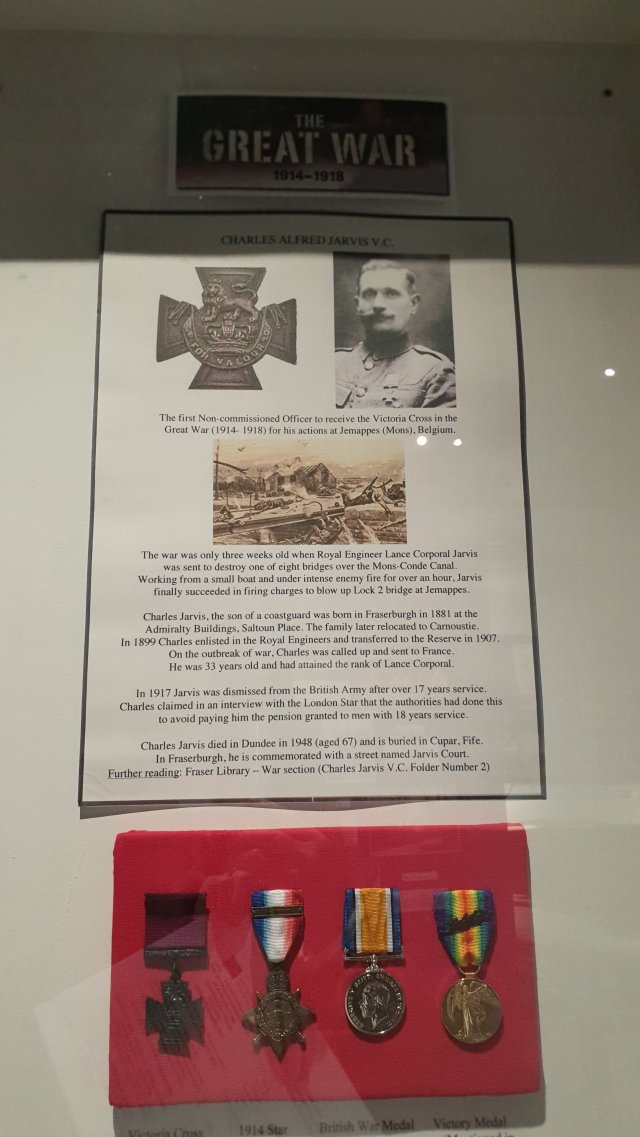 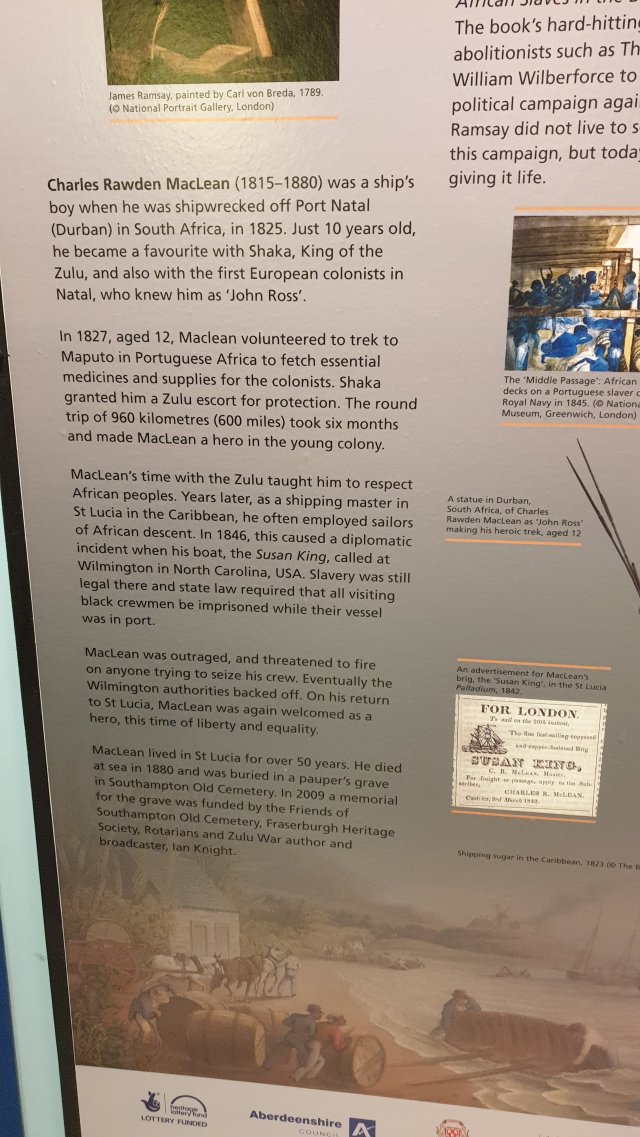 It still hadn’t rained, so we changed plans and went for a walk at the rspb reserve at Loch Strathbeg, where we saw Spoonbill, a rare visitor here. Then, heading south, we bypassed Aberdeen and went to the wonderful Dunnlottar castle, probably the most impossibly sited fortification we have seen.

Partly ruined, but with some intact rooms, it is a fascinating castle, and takes some getting to! Surrounded by high cliffs, again thronged with nesting seabirds, and with waves crashing on the rocks all around, it is a very atmospheric place. It held out for 8 months against Cromwell’s troops, and was responsible for safeguarding the Scottish Crown jewels, which Cromwell wanted to destroy. Before the castle fell, they were smuggled out by Mrs Grainger, who then hid them in her bed!

Our stop for the night was the carpark at another RSPB reserve at Fowlsheugh, and we treated ourselves to a lovely meal out at the Creel Inn at Catterline, a tiny fishing village typical of this coast. 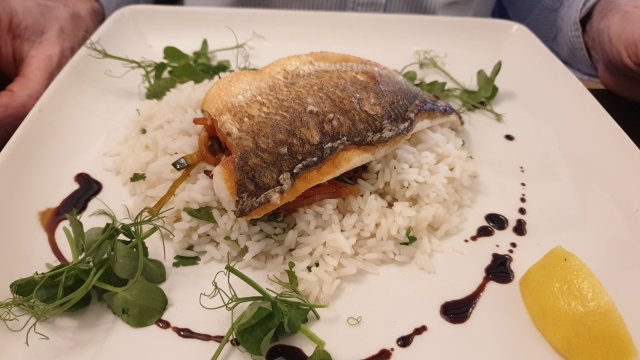 This chap was in the field near our overnight stop!

Another super day and a good nights sleep was followed by an early morning walk along the cliffs at the Fowlsheugh rspb reserve. 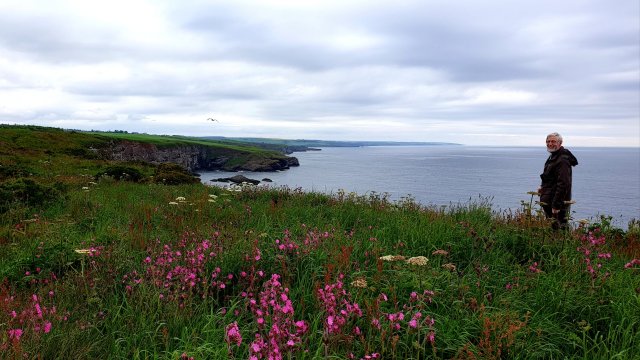 This is the largest mainland seabird colony in Scotland, and stretches for over 2 miles of cliffs where every tiny ‘des res’ ledge is occupied by either Kittiwake, Guillemot, Razorbills, Cormorant, Fulmar or Terns.

Just checking out the new neighbours! 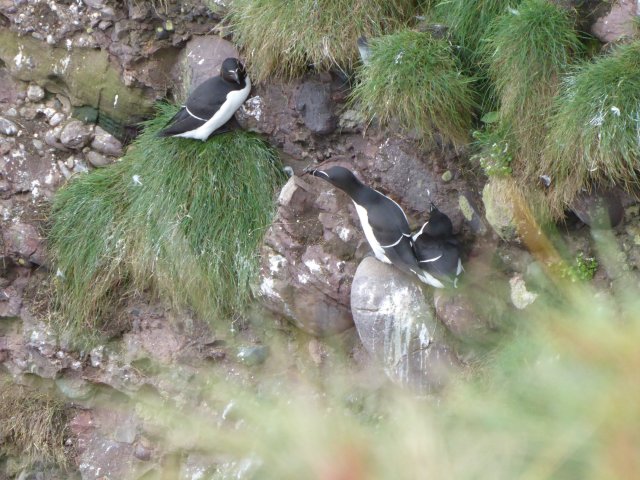 It seemed as though the cliffs, the sea and the sky were simultaneously full of birds, and the noise was incredible.Or even one of about just 20 puffin!

Then, southwards to the House of Dun, a beautifully proportioned and symmetrical georgian house designed by William Adam in 1743.

Even the interiors were symmetrical with paired doors and alcoves on each wall… although it turned out that symmetry overruled functionality at times! 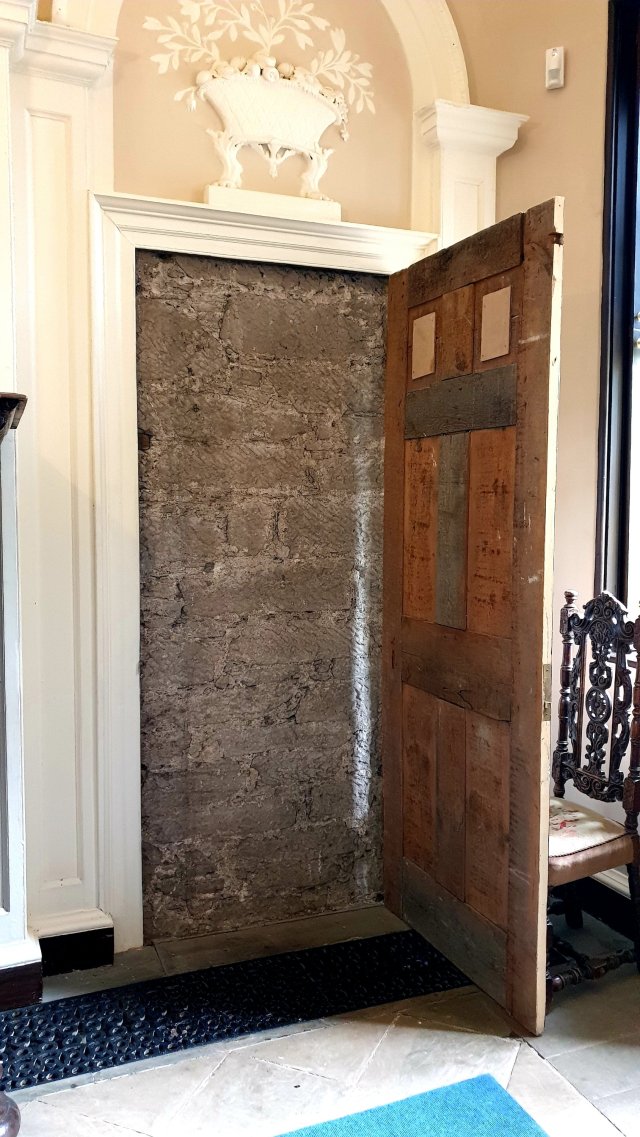 The plaster work was exquisite,

although it was later found that the plasterer sometimes cheated! These were real shells from the beach that he just dipped in plaster and then stuck on!

The owners were the Erskine family, and in 1825 Lady Augusta, daughter of William IV, married into the family. She was a great needle woman and her stunning embroidered are seen throughout the house.

The later family were really into ‘mod cons’, and had this special bath

and even more special shower… a very advanced model in it’s day! Your servant had to stand outside and pump the water back up to the top all the time… as presumably it got colder and dirtier each time!

The commode next to it was the first to have a flush.. the white button emptied the contents into a tray below! Strikingly similar to the cassette toilet in our campervan, although we are missing the mahogany and wedgwood china!
We also enjoyed the gardens, and loved the game larder, set amongst lime trees to keep bugs away!! 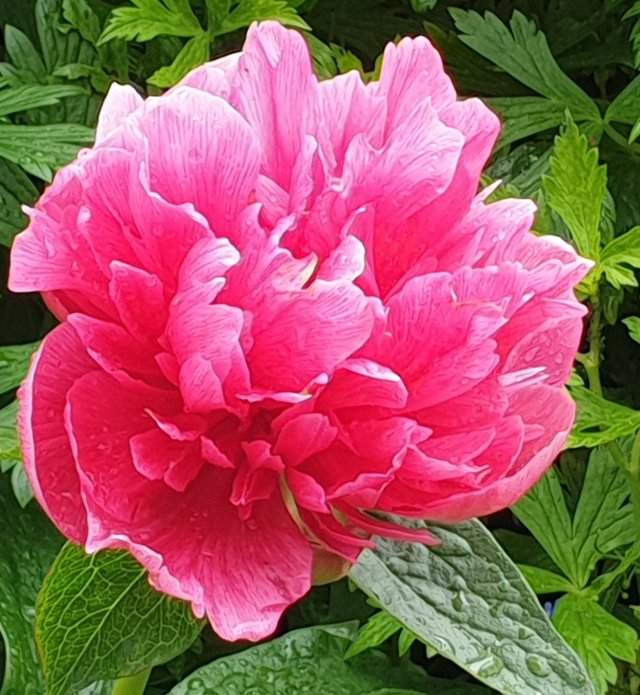 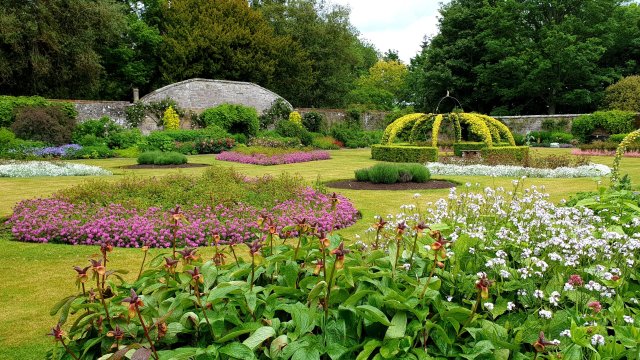 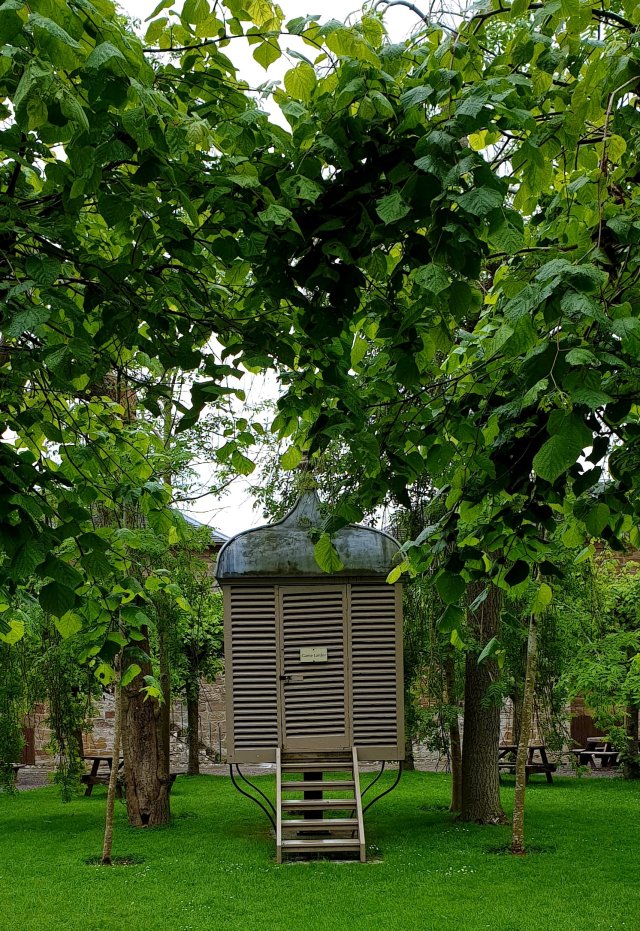 Next a nice walk at Kinnordy Loch RSPB where we saw red squirrel and Osprey. However we also learned a salutary lesson. We had a picnic lunch in Boris before our walk. Suddenly a young man on a sporty motorbike roared into the tiny carpark and proceeded to repeatedly rev up his engine, looking angrily around him before roaring off. We, and others, were shocked as it seemed such a pointless act. Later, as we finished our walk at the peaceful loch, I spotted a memorial to Stephen Donaldson, covered in flowers. Of course I turned to Google. Stephen was a local lad who had been brutally murdered and then dumped in this car park exactly 1 year before. His hobby was motorbike racing. The angry youth disturbing the peace was in fact a very upset friend of Stephen paying him tribute. So easy to judge without knowing the facts. And so sad.

Our next stop abruptly changed the mood. Glamis castle was the childhood home of the Queen mother, and is truly a fairytale castle.

And we just happened to arrive on Highland games day. Too late for the games themselves, we did see, and hear, a lot of bagpipes!

The interior of the castle is gorgeous, and it is still lived in. It is a mix of 12th century castle, and more modern splendour. Unfortunately, no photos were allowed, so these two were from postcards!

A busy day, and the luxury of a campsite tonight for all the necessary ablutions! Five Roads park in Alyth was ideal. Small, quiet and with lovely hot showers.