Warning….lots of photos, many birds!

Ecuador is one of the geographically most diverse countries on earth! From Volcanoes, and high Andes peaks, to Jungle, coastal lowlands, and the Cloud Forest. The vast number of species here is due in part to it never having had an ice age. 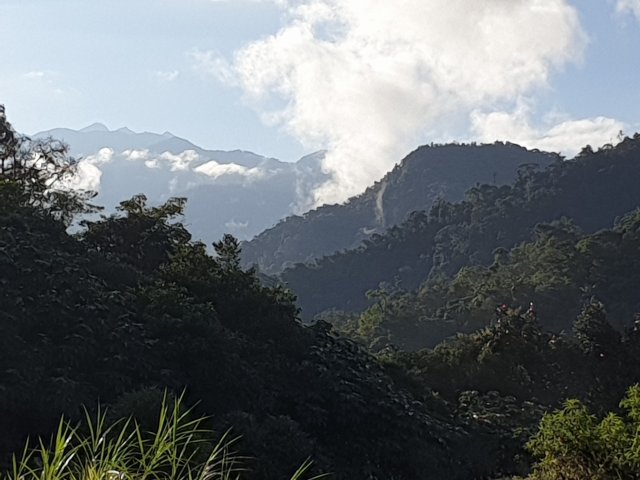 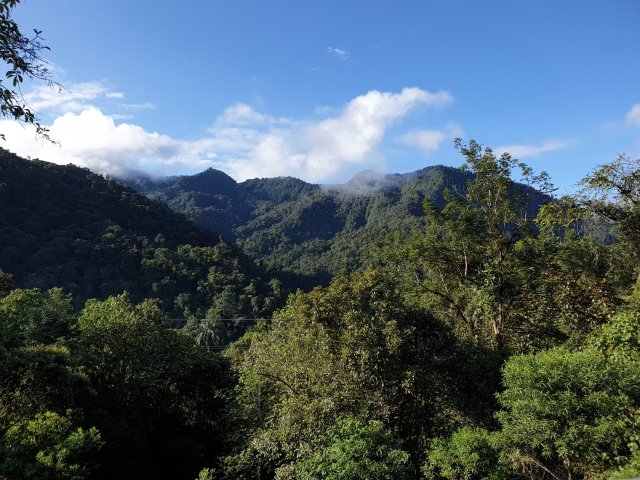 The Cloud forest is a belt of mountainous land between 1000 and 2,800 metres above sea level, where cloud is frequently trapped. High rainfall and moisture mean flush semi-tropical vegetation, and masses of wildlife, particularly birds.

After our very long journey, we arrived late to a lodge, Las Terrazas de Dana, and were shown to our cabin up a very long flight of steps. The owners organised dinner for us on the veranda, and although it was too dark to see much, we sensed we were somewhere special, although the insect visitors were a bit alarming!

Despite our long day travelling, we couldn’t waste any time… although when the alarm clock woke us at 5am I did momentarily doubt the wisdom of booking the early morning bird walk!! We went down at 6.00 to meet Julia, our guide, and left in the dark to climb up the hill. As it got light, Julia came to life, planting her telescope down and calling ‘Hurry hurry, Look look, special bird’ as she pointed out lots of new and magical birds. 3 species of Toucan, Laughing hawks, brightly coloured Tanagers, Parrots, and many more. 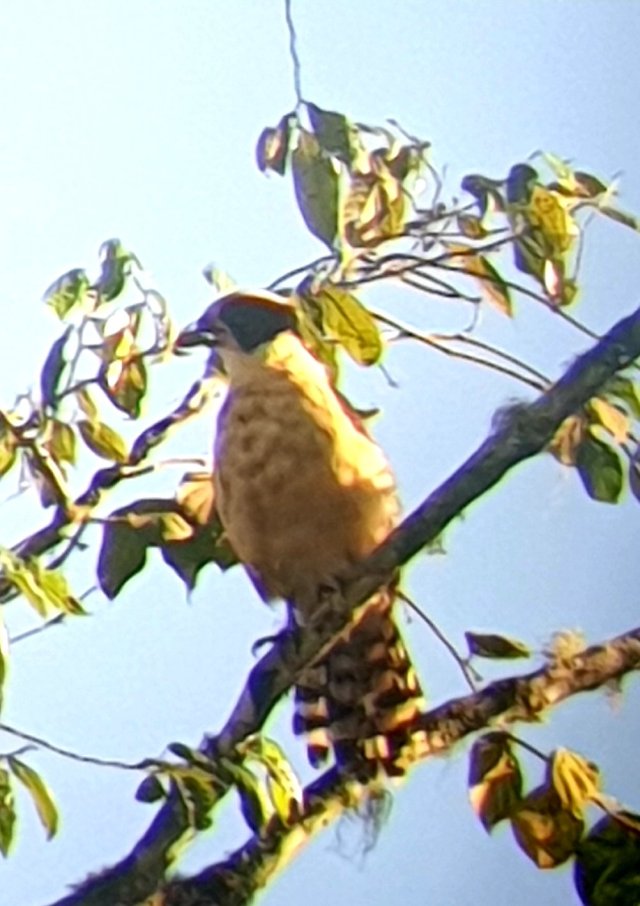 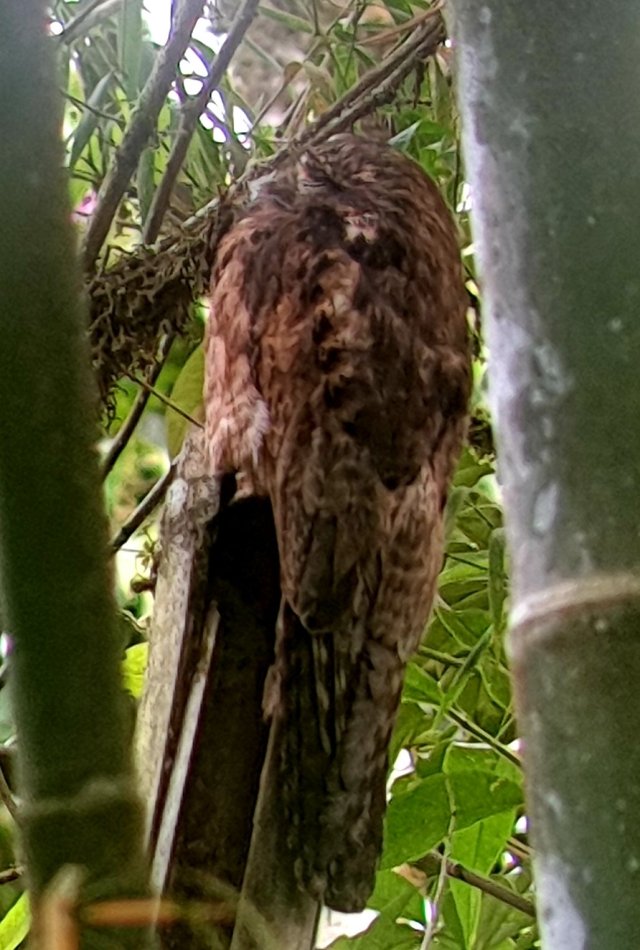 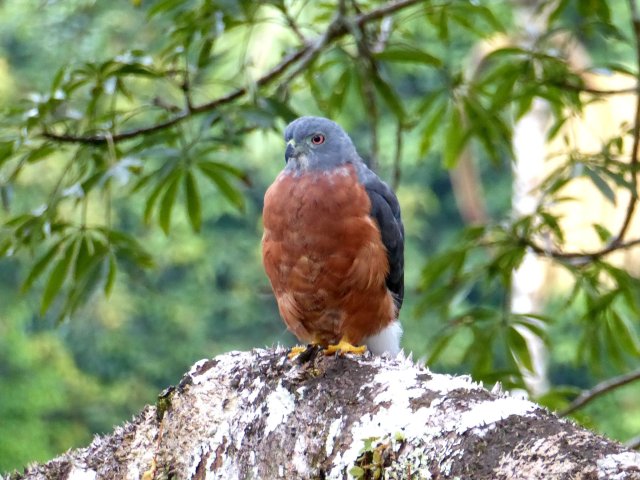 59 new species to be precise, and an alarming wasp nest!

Julia came back to the lodge with us at 10.00am… where we found breakfast was waiting!

This was the first time we could see the lodge in daylight, and we were in beautiful tropical gardens, with views of the cloud forest all around. 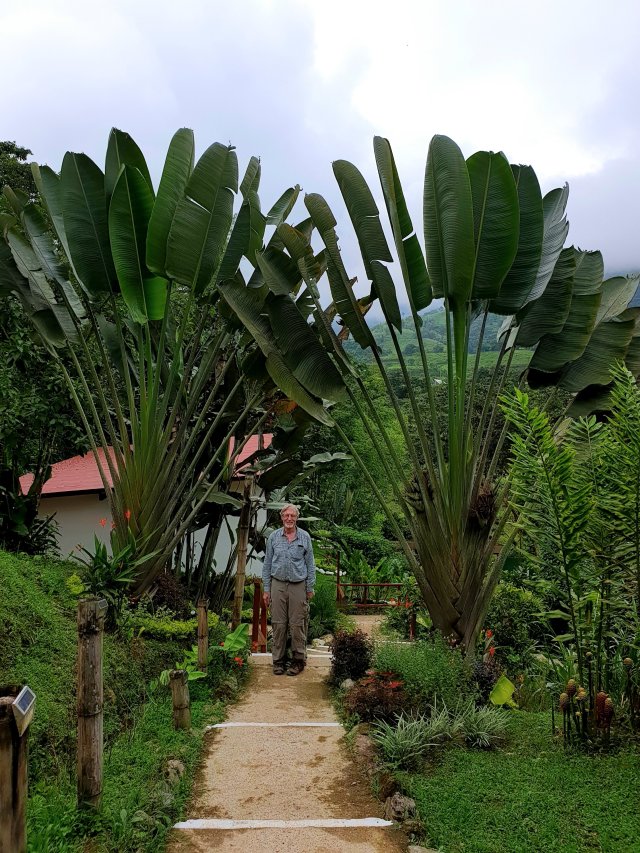 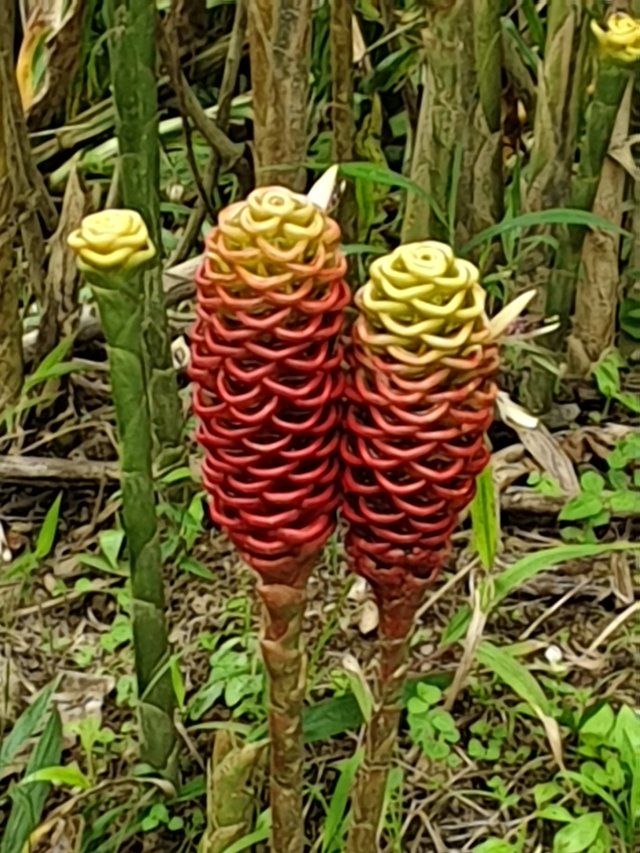 Amazingly, the gardens were full of hummingbirds. 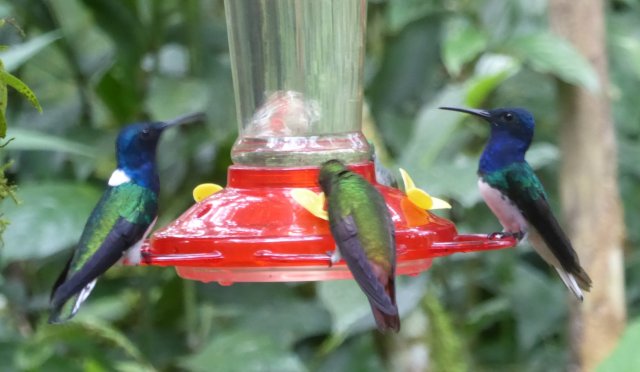 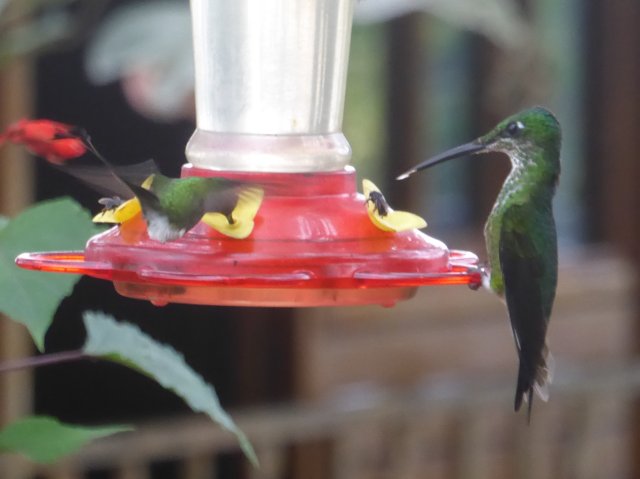 We sat and watched them for ages, before returning to our room to plan the afternoon….. and promptly fell asleep!!

Later we walked down into the local town, Mindo. It is an unspoiled Ecuadorian town, and although many of the houses were very basic, and there were people who obviously had very little, they were happy, friendly, and never once were we asked for money or help. Birds and colour seem to be a big part of their life. Murals adorn many walls, including the football ground!

We found the delightful Food Studio, a Vegetarian/Vegan restaurant run by a charming Ecuadorian couple. We had an unusual but delicious supper there, and loved the fact that if you weren’t fully embracing the Green life, for $4 extra, you could add a piece of beef, Chicken, Fish or cheese! A cunning way to broaden your customer base, and cater for groups with mixed eating needs!

The highlight of the meal was vegan icecream made from Plantain juice and Flowers. The Hibiscus was divine. 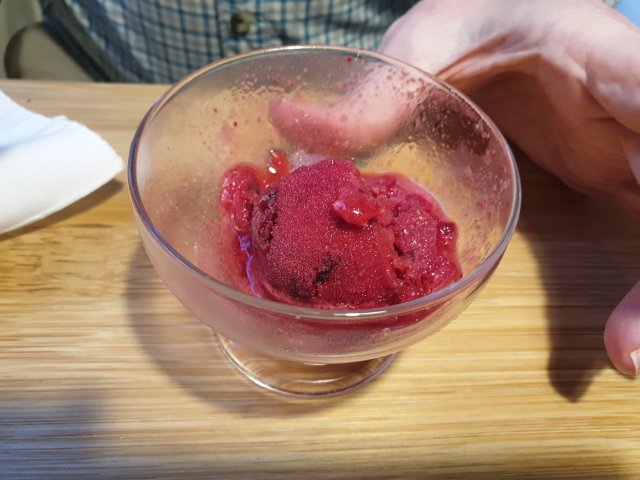 Passionfruit and Basil sounded odd, but was gorgeous, and the others were fruits we had never heard of, but equally yummy!

Back to the lodge to discover that the bird tour we had booked for the next day required us to be ready at 05.20 am. Gulp… early to bed then!

The 4.30 alarm was harsh.. this had better be good. The lodge gave us muffins and bananas to keep us going and we set off with a jolly taxi driver who spoke no English. Our Spanish lessons mean I can manage a little bit of conversation, but only the basics. All the roads here are packed earth, and very twisty and bumpy, so it was an interesting 45 minutes. We pulled up behind a few other vans, just as it was getting light. We were introduced to Angel, one of 2 brothers who own the land at La Paz des Aves. We were in serious company. Mostly men carrying expensive cameras with huge lenses, and top of the range binoculars. We had come to see a rare and iconic bird, the Cock of the Rock. Very elusive, if we were lucky, they would gather here for a short while at dawn.

A gate was unlocked, and we were led down a twisty, narrow path to a hide.

We were lucky. About 12 birds gathered in the trees. Never coming really close, and in poor light, but giving us a great view through our binoculars. A really stunning bird. 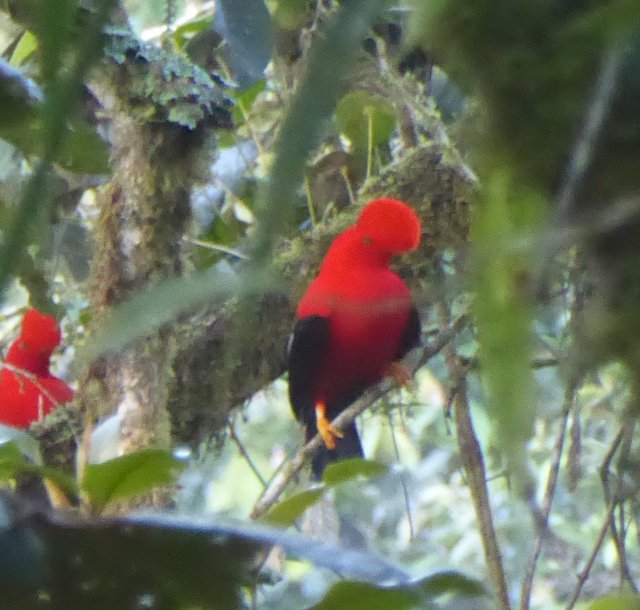 We felt somewhat inadequate.. Chris with his little Lumix camera, and me with my phone, so these are the best pics we got.

We didn’t realise this was only the start. We climbed back up the hill, into the taxi and Vans and set off to another spot, where Angel and his brother disappeared into the forest, whistling and cooing. Suddenly, Angel appeared, and called us all over. At the edge of the woods he put a banana and cooed gently. Suddenly 2 birds appeared and pecked at the banana, keeping a wary eye on us. This was the Great Ant Pitta. A very very rare bird. 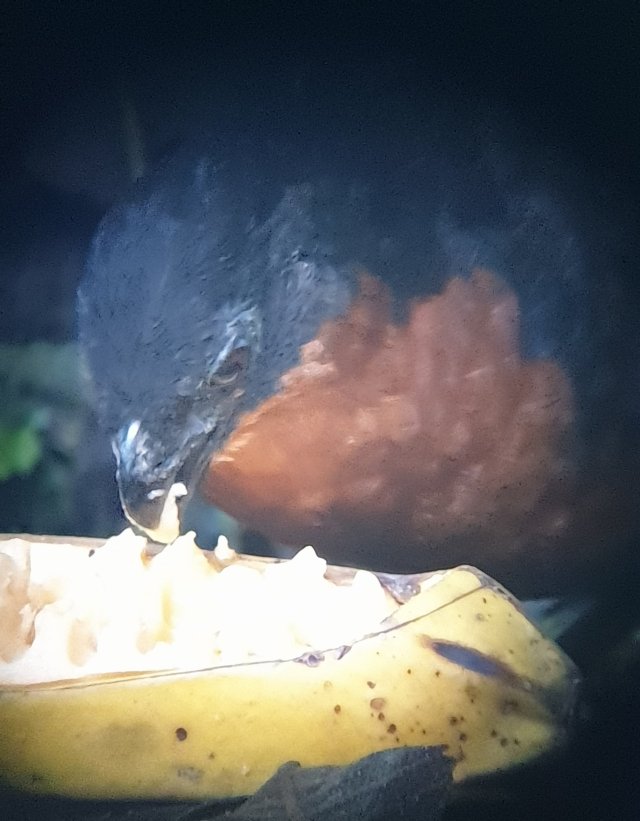 The whole morning was spent with the brothers who called almost magically call these wild birds. Their land is a world renowned refuge, and they have spent years creating a safe haven here, and building up relationships with the totally wild birds.Finally, we were taken to a shack, where breakfast had been prepared for us (at 11.00am). It was surrounded by stunning views and Humming bird feeders . So many birds visited while we were there. Here are some photos. What a morning! 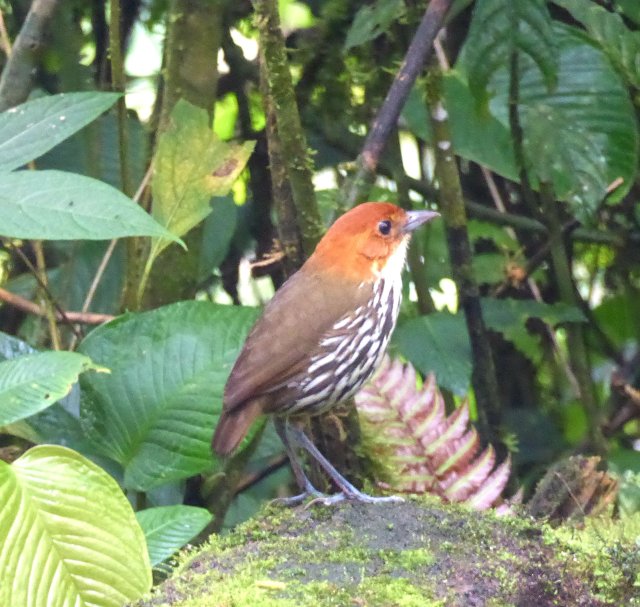 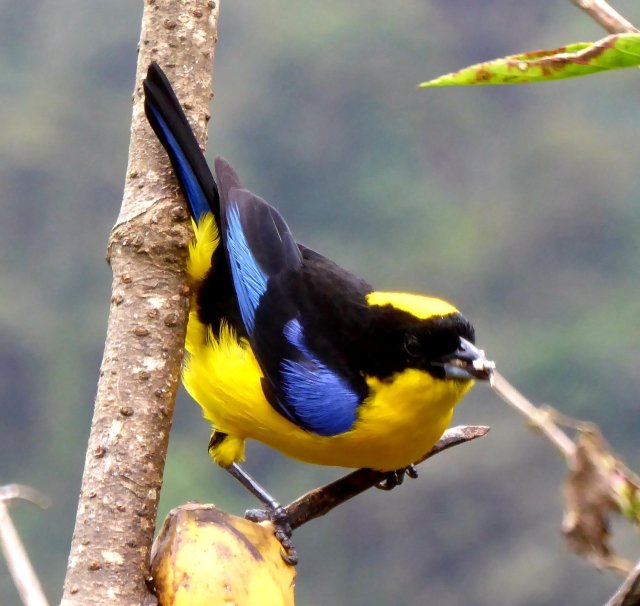 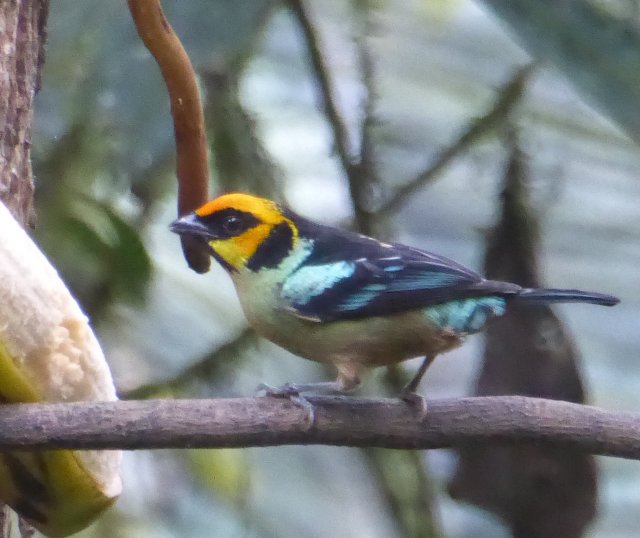 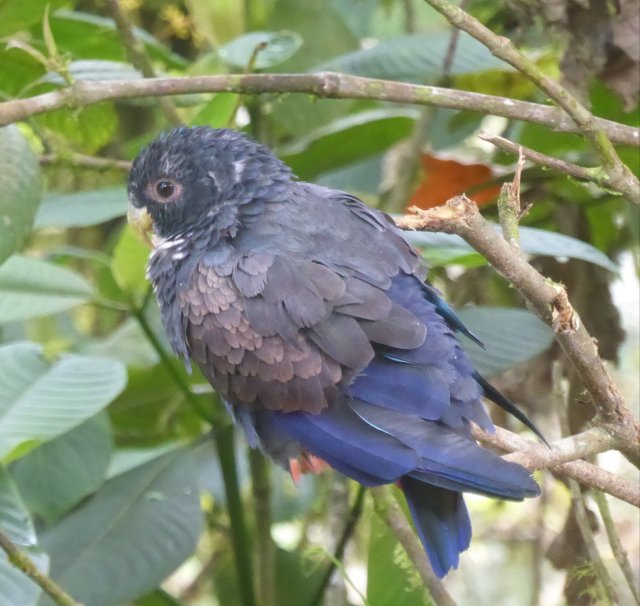 Some of the birders were a bit intense, and we struck up a friendship with a Netherlands couple. She had a wicked sense of humour, and she and I did have some very non serious giggly moments!! Here are Chris and I looking like proper birders!

Back to the lodge. In the afternoon we walked into town again. Several hostels have sidelined to bring in a few extra dollars. One had an amazing garden of Orchids. There are over 4000 species of orchid in Ecuador, and some of these were miniature, which perfect flowers just 1 or 2 mms across. 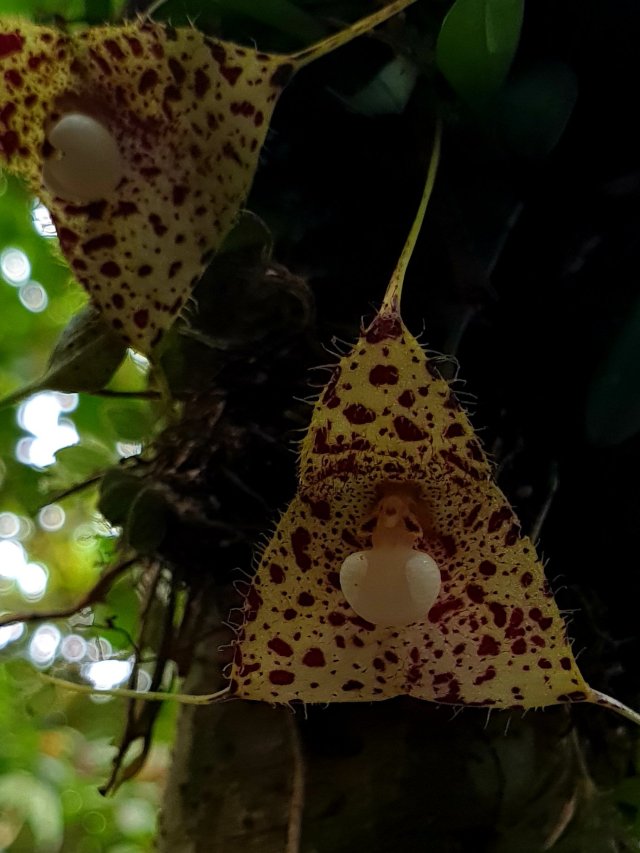 Another hostel had created a hummingbird garden and a terrace. We sat there for ages watching 10 or 11 different species performing aerial acrobatics. Finally, to an artisan Chocolate cooperative, where we were shown all the steps to making natural chocolate, which, if made from pure cacao, is very good for you!! We had lots of tastings at the end which were yummy. 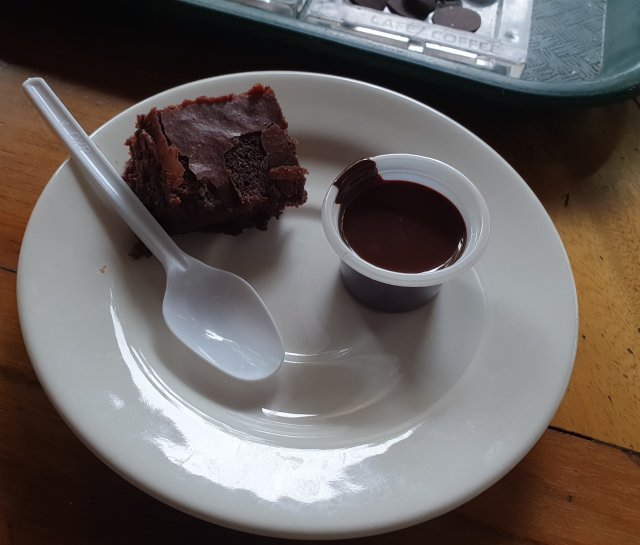 Our last dinner back at the lodge, and then packing for our flights the next day.

We were lulled to sleep by rain, and then rudely awakened (well I was…. Chris snored on!!) by thunderous rain which lasted for hours. The cloud forest was living up to it’s name!

Next day, en route to the airport we stopped at Mitad del Mundo, literally The middle of the World. Ecuador is the only country to be named after a geographical feature.. Equator. And we were on it…. well, nearly on it. They built a big monument on it, but when GPS came along, they found it was a few hundred metres down the road, so the Intinan museum opened there. We visited that which is tacky but fun. On the equator line they do experiments like pouring water down a plug hole. On the equator, straight down, no spin. Northern hemisphere, it whirled anti clockwise, southern hemisphere, it span clockwise. We also tried to walk along the equator with our eyes closed despite being 11am, Chris looks as though he is quite drunk! (He really wasn’t! Honest!).

Quite how this all works, we aren’t sure because new scientific measurement suggests the real equator might be another few hundred metres away! Anyway, it was fun, and we had a kiss across the equator, one in each hemisphere! 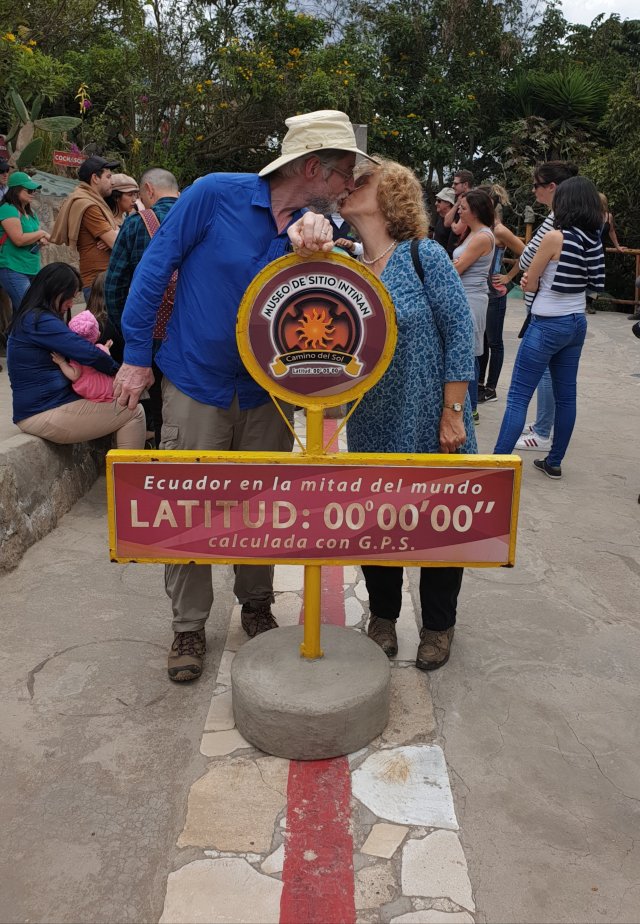 We are sad to say goodbye to Ecuador. A diverse, friendly, beautiful and wildlife rich country with great food! The world’s largest producer of bananas, home to 1600 species of bird, and of the Panama hat (yes really), two of Unescos first World Heritage sites, the World’s largest active volcano, and the first country in the World to abolish slavery.

Quite a place. Ecuador, we will miss you.