Leaving Cuba, we had a stopover in Bogota, Colombia where we sampled some traditional food and beer! 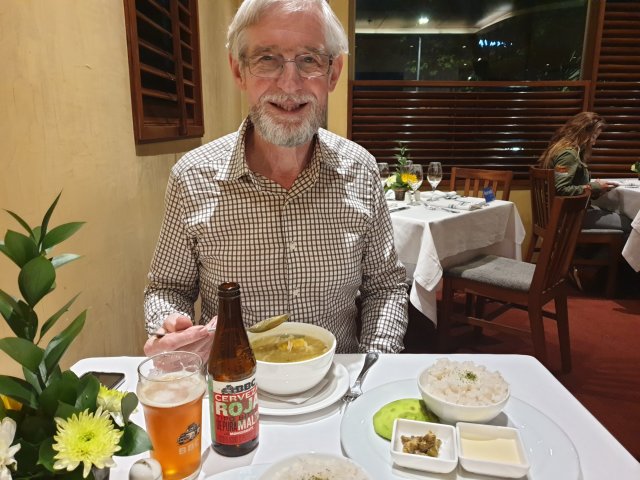 Then, off to the Galapagos Islands……. What can I say? Well, being me, lots, of course!!

Our desire to visit was mainly fuelled by awesome documentaries, and impossibly close up photos of unique birds and animals made famous by Charles Darwin among others. There are really just 2 ways to visit. Water based on a cruise, or land based. Anyone who knows me will know that, despite having the best travel sickness pills ever, 9 days on board a very small boat (many have just 8 or 10 small cabins), in notoriously rough seas, 24/7, is a step too far! Water based tours also start at about double the price of land based, so it was an easy choice. We chose a smaĺl, locally based company – Guiding Galapagos and together planned an itinerary mixing geography, local culture and of course wildlife.

We were based on 2 different islands, Santa Cruz and Isabela, a 2 hour high speed ferry ride apart. The ferries are somewhat cramped,

On transfer day we had 2 sudden tropical cloud bursts. One as we were going to the boat on Santa Cruz, and one as we arrived on Isabela island. Everyone, and their luggage, were drenched both times!

We were shown to our new hotel room as the staff were mopping up a large pool of water from the floor, smiling and saying “The rain sometimes comes in!!” Trying to dry our clothes was tricky in 80% humidity, and we were a bit fed up, until we saw this sign in the beach bar. 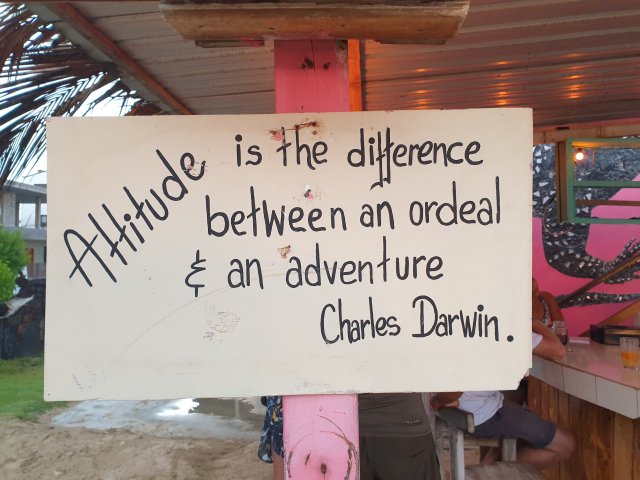 So true, and it put a few wet clothes back into perspective.

Our accommodation was in small locally run hotels, both clean and comfortable. On Isabela it was the Volcano hotel, almost on the beach, renowned for sunsets. It did not disappoint!

The Galapagos archipelago comprises 21 islands, mostly uninhabited, which straddle the equator, so tropical insects can be a problem. There were actually very few! Another invasion of minuscule ants in true Tom and Jerry style lines was passed off by our hosts with… ‘Don’t worry, they are not offensive’. Well, true, they weren’t hurling abuse at us, but we didn’t want them in our bags, so we used our Boots non deet eco friendly insect repellent at the entry point which seemed to deter them!! We also had the tiniest in room gecko on patrol. Spot the gecko!!

It is amazing how something so tiny can make so much noise!

The islands are in the Pacific Ocean, nearly 1000 km east of mainland Ecuador. They are heavily influenced by prevailing sea currents. The cold Humbolt current coming from Antarctica brings many fish, and this encourages the birds etc. El Nino years are disastrous here, because it prevents the cold current reaching the islands, so there are many less fish, birds cannot breed, and the food chain is in trouble.

There is no drinkable freshwater on Galapagos at all, which is probably why it was not really settled until the 19th Century, despite being ‘discovered’ in 1535. All water here is either bottled or purified.

Darwin came in 1835, and his observations that the animals and birds were unique, and appeared to have adapted and evolved according to their island environment, led to him proposing the theory of evolution, and writing The Origin of the Species. And the rest, as they say, is history!

The islands are now a National Park, full of wonders. Not always the most colourful or dramatic creatures on earth, but definitely unique. For example 15 species of little Darwin finches, each adapted to have a different food source and habitat to ensure survival. This is the nest of a cactus finch. 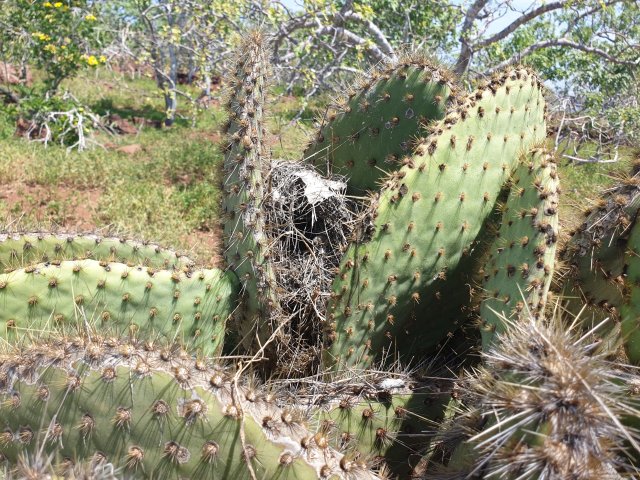 There are few natural predators here, so many creatures are fearless. We were standing within a few feet of many of the birds and animals we photographed.

The biggest predators were, and are, man himself and his introduced creatures… rats, dogs, cats etc. 35,000 people live on the islands, and balancing their needs with the protected National Park status is tricky and at times, controversial. For example local people are resentful that they are no longer allowed to fish from their own islands due to the protected status, so must pay high prices in the shops.

The wildlife are the stars. Giant tortoises are incredible.

He is eating apples!! Some live to be 150 years old. However they have a managed breeding programme, because in the wild less than 1% of eggs will reach maturity, mainly due to the predators I mentioned. Amazingly, eggs incubated at 28°C will be Male. 29.5°C, female!! Large Male tortoises can be 4ft long, weigh up to 350 kg, and walk several km a day! 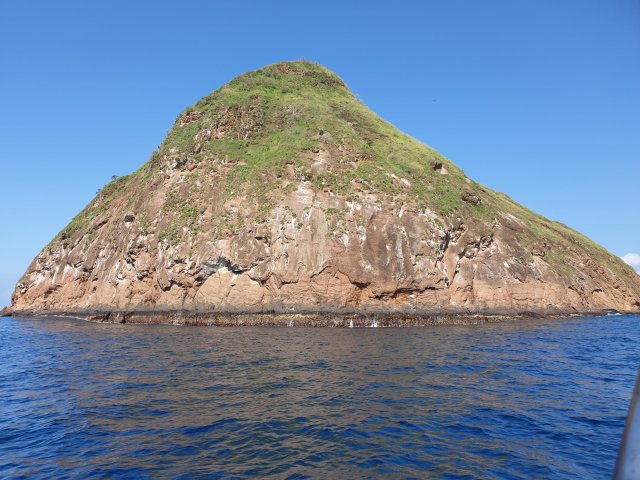 The Galapagos islands are volcanic, and are moving eastwards by 5cms a year, as the Nazca plate drifts. Some Volcanoes are active. We climbed to the rim of Sierra Negra, the 2nd largest Caldera in the world. It erupted just last year, for 54 days, and fumaroles were smoking on our visit.

We also did some hikes, and kayaking, with sea turtles popping up around us!

Amazingly, my vintage 1990’s swimsuits were worn almost every day, and I gradually became more adept at snorkelling. I jumped off the side of boats and RIBS, and paddled around in deep, open seawater, with big waves! I even swam around an island…. with a life jacket on! The fish were lovely. 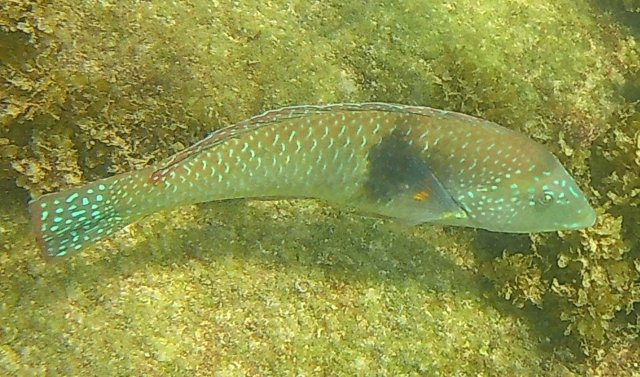 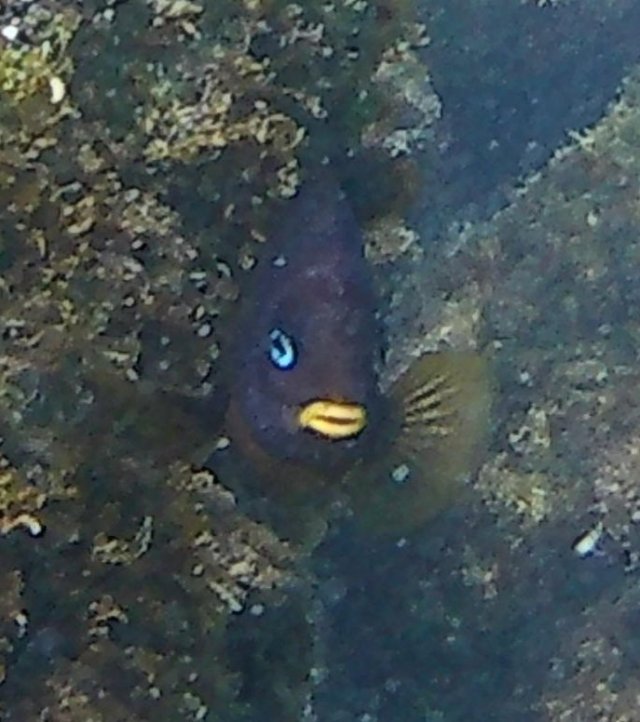 but we also snorkelled with huge Sea Turtles, 1.5 m sharks, Rays, Sea lions, and even saw an incredibly well camouflaged Sea horse. It was fantastic. 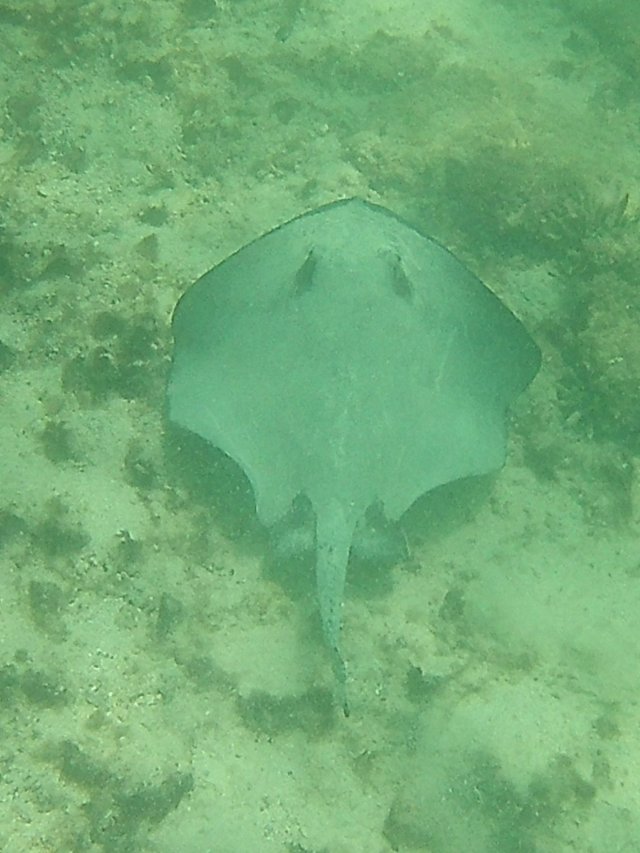 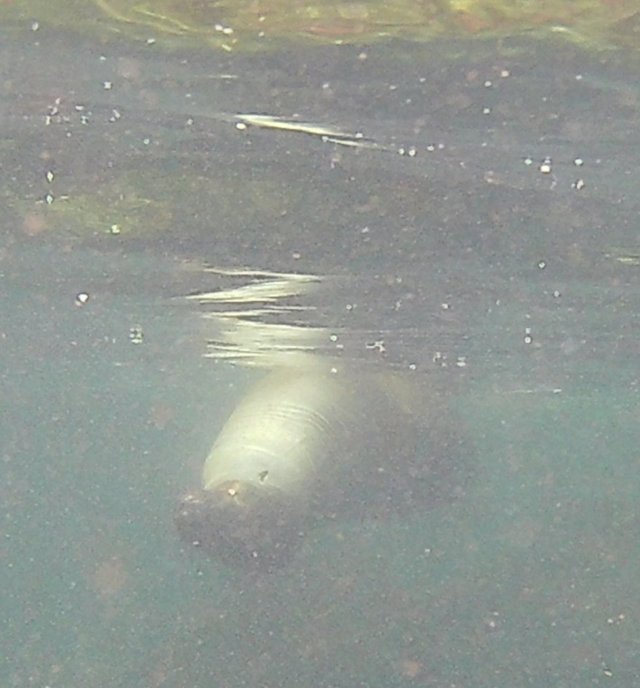 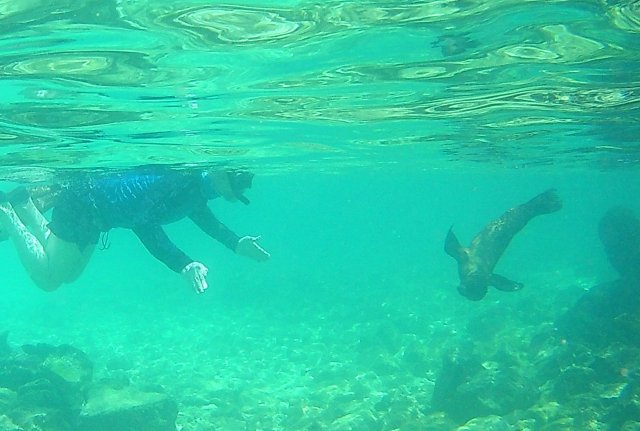 This is a trench where sharks come to rest during the day!! 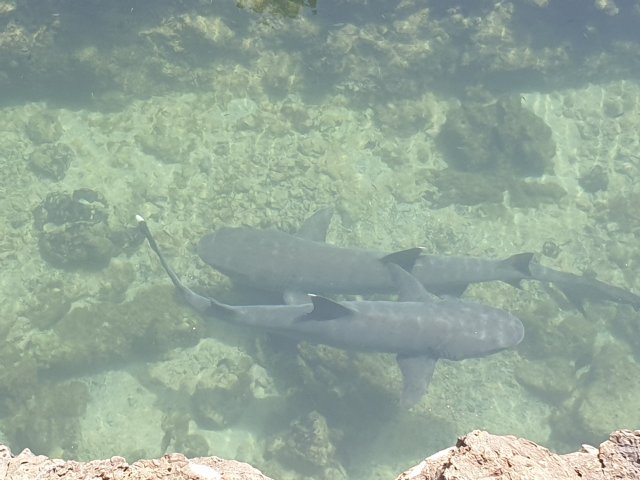 Some of the most astonishing creatures are the Iguanas. Living dinosaurs. Marine Iguanas blend in with the black lava rock, or grey stones. 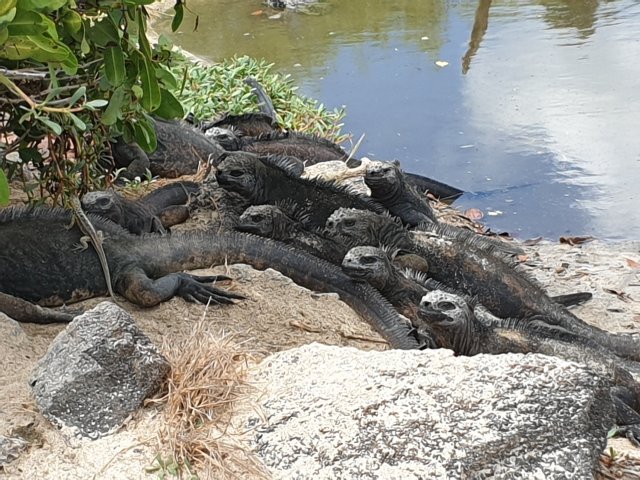 They sleep a lot, often in bunches! They sound as if they are hissing at you, but in fact they must regularly sneeze out salt!

Land Iguanas are golden yellow. They frequently shed their skin, so look rather threadbare, but I thought they were stunning.

They have no predators as adults, but are prone to dehydration…. this one literally dried out in the heat. 30°C most days.

There are some gorgeous beaches – Tortuga and Bachas were our favourites, complete with fresh turtle tracks, and newly hatched eggs.

Crabs abound and are a food source for the super seabirds.

One of the most unlikely is the unique Galapagos penguin which has adapted to live, not in Antarctica, but on the equator!

There is also a Galapagos flamingo. Both sexes of bird have the amazing capability of producing milk to feed their young.

We never tired of watching Brown Pelicans, Blue footed Boobies, Noddies and Terns diving into the sea a few metres away. 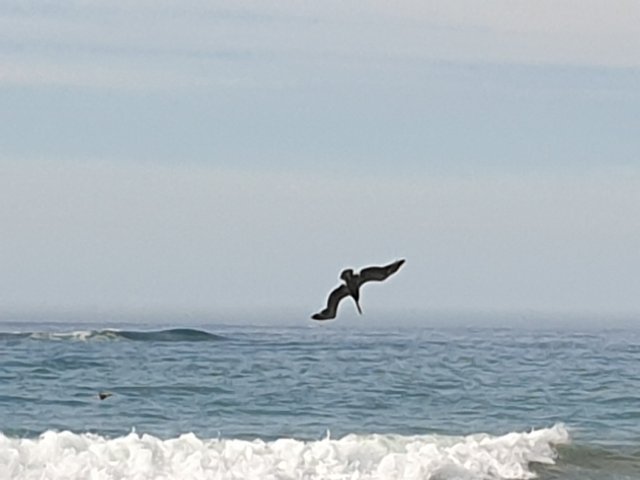 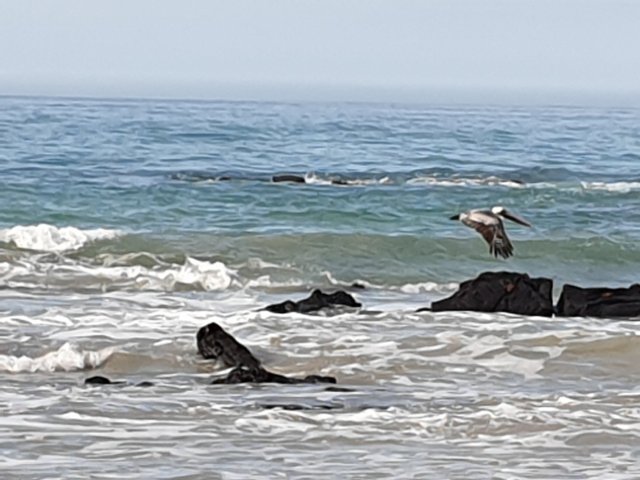 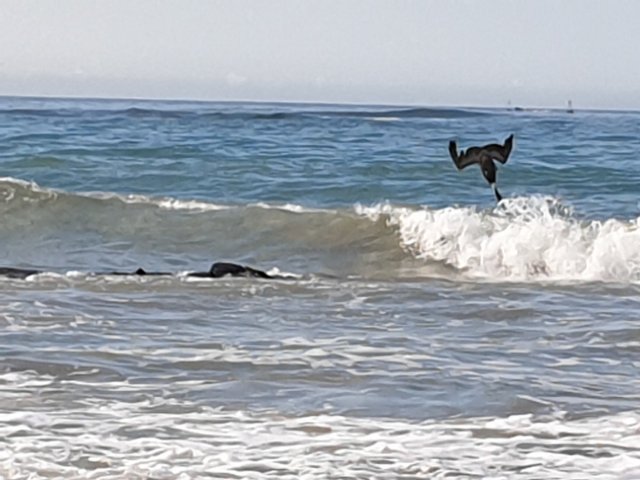 On Isabela island, we visited Los Tuneles, an other world landscape of hollow marine lava tunnels and cacti!

There we encountered a female blue footed Booby a few feet from the path. She was singing for a mate. 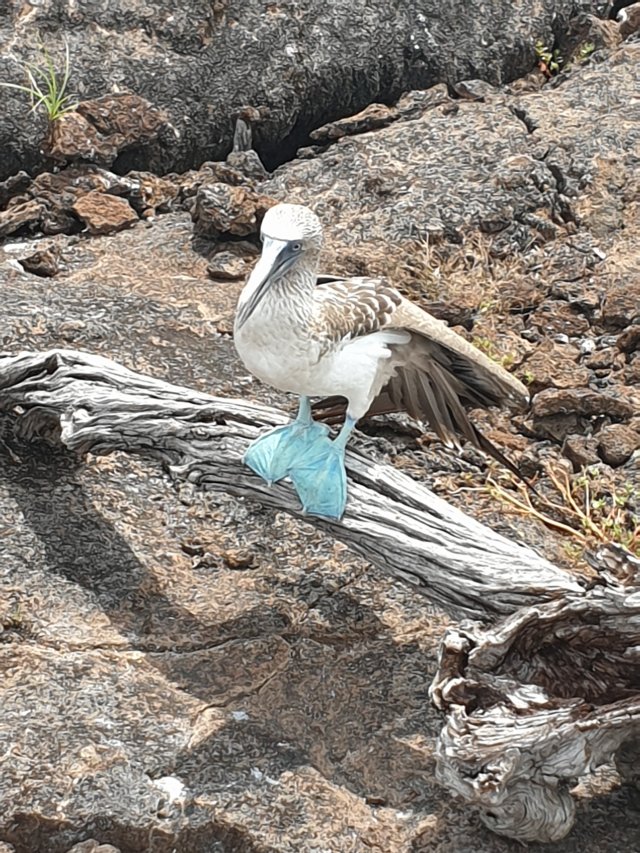 Amazingly, a Male arrived and did his courtship dance right in front of us! It obviously wasn’t good enough, because she didn’t respond, so he flew away dejectedly (we assume!!).

The next day, this encounter was topped. North Seymour island is home to the Great and Magnificent Frigate birds. Last season’s young were everywhere, being fed by parents who regurgitate food for them. 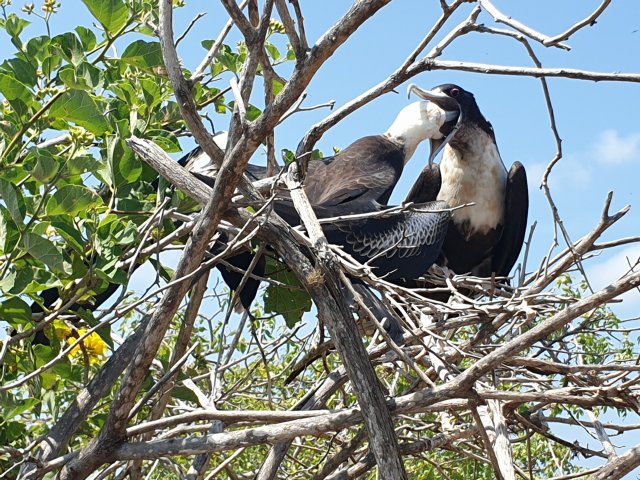 It was breeding season. The males spend 2 hours inflating a huge red neck pouch, and boom with it to attract a mate. It is exhausting! 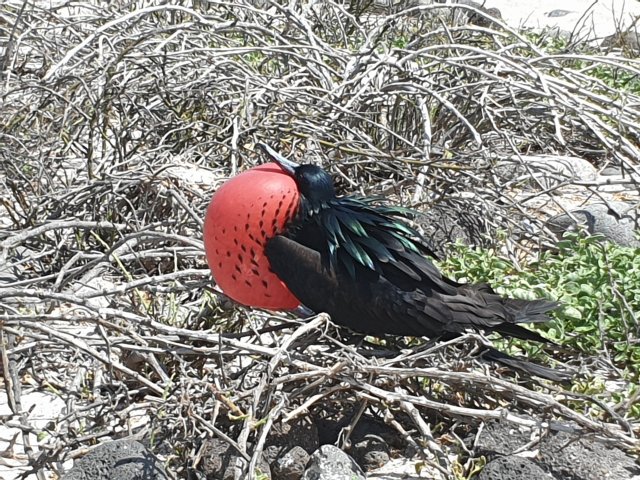 They were everywhere, and remarkably were within feet of us. Breathtaking!!

Our visit to Galapagos was wonderful. We had good food, (especially fish), met some lovely people from many countries (hardly any fellow Brits!), and were blown away by the wildlife. There were some quirky things… the in car phone for example!

I even managed to take a Turner-esque sunrise shot!

One word for Galapagos… Incredible! 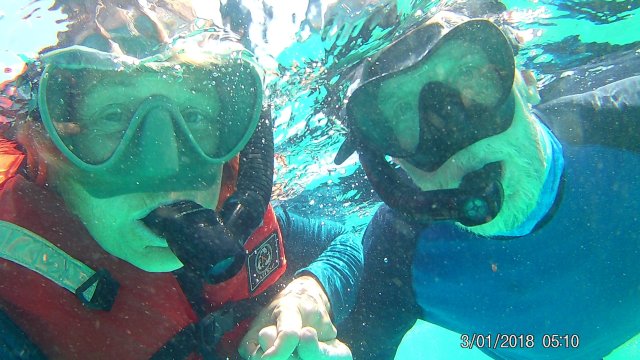