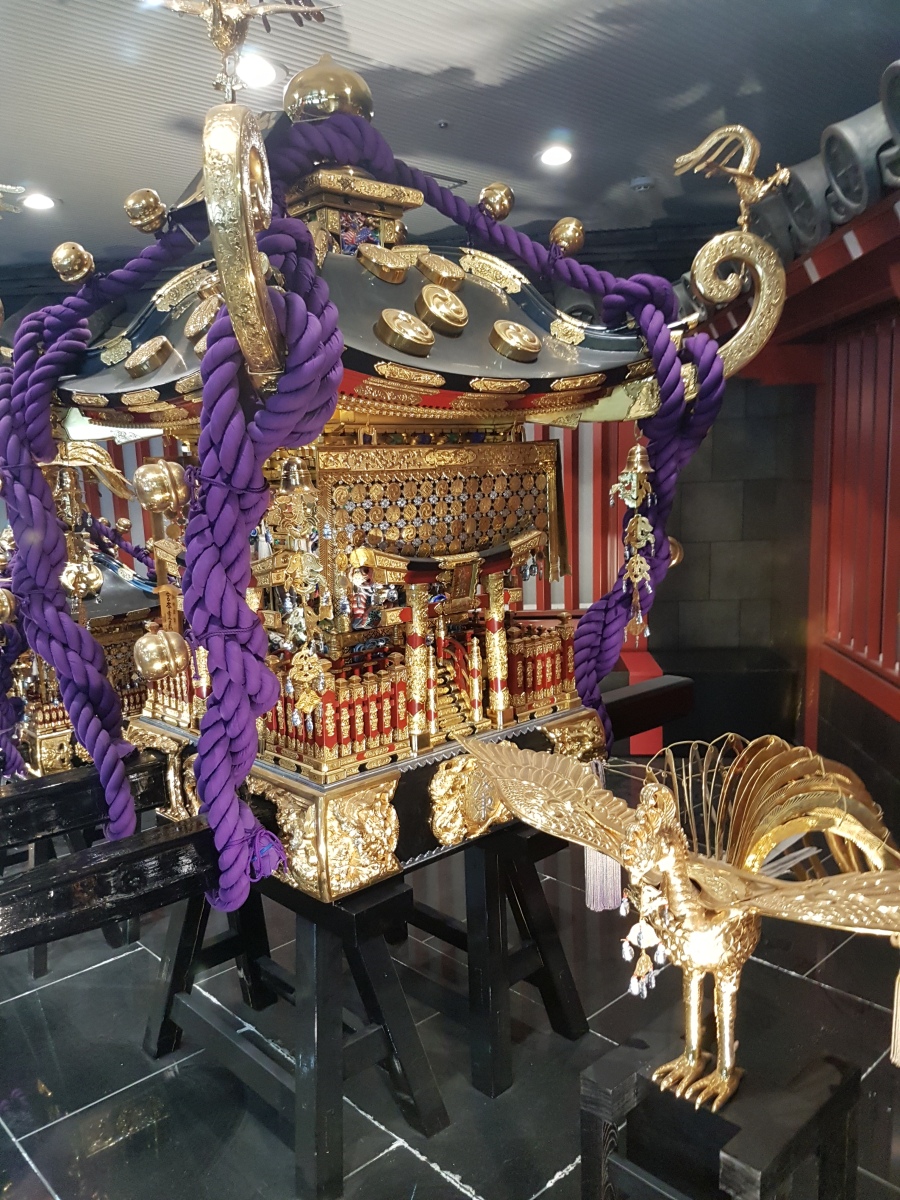 Japan. Population 129,000,000. Made up of 6,582 islands, but 4 main ones. The largest is Honshu where most major cities are located, including the capital Tokyo.

A land with a history of Shoguns, Samurai and Emperors, intermixed with bullet trains, and futuristic architecture and technology at every turn. I fell in Love with it in the toilets at the airport!! All mod cons. Spotlessly clean. Heated loo seat. Auto loo paper dispenser, Bottom washer, drier and even a music button to press to mask any embarrassing noises. 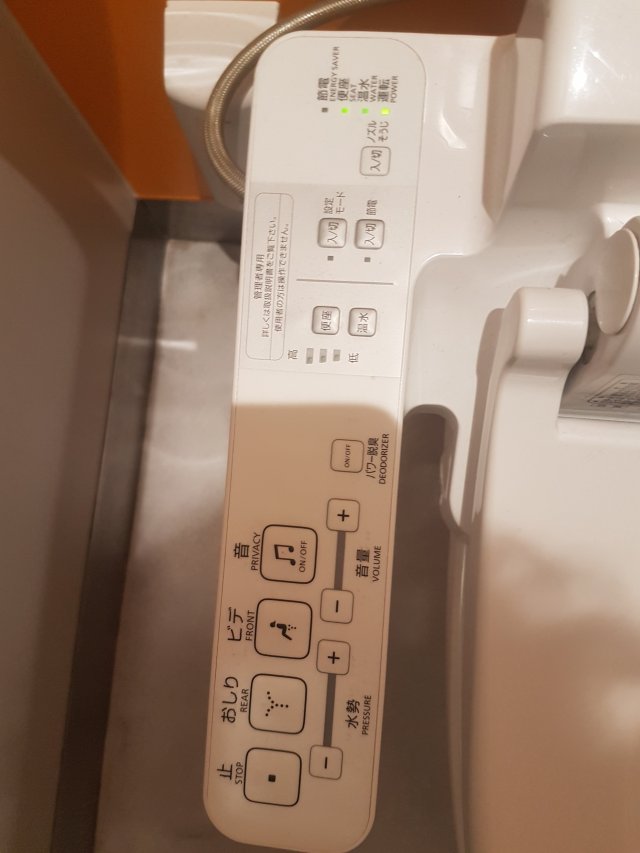 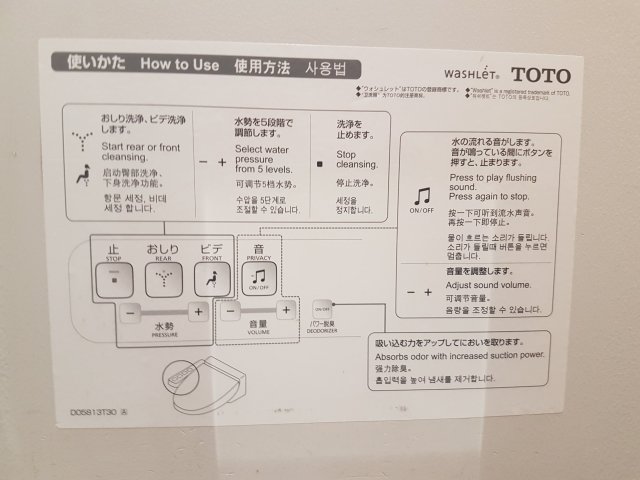 We knew weather would be potentially chilly here. It is freezing! Sadly our 2 days in Tokyo were accompanied by rain, and even snow flurries! It didn’t stop us enjoying our time here!

Tokyo was massively damaged by the massive Kanto earthquake in 1923, and again by US firebombing in WW2. An amazing, modern phoenix has risen from the ashes, with wonderful ancient buildings and parks interspersed between. 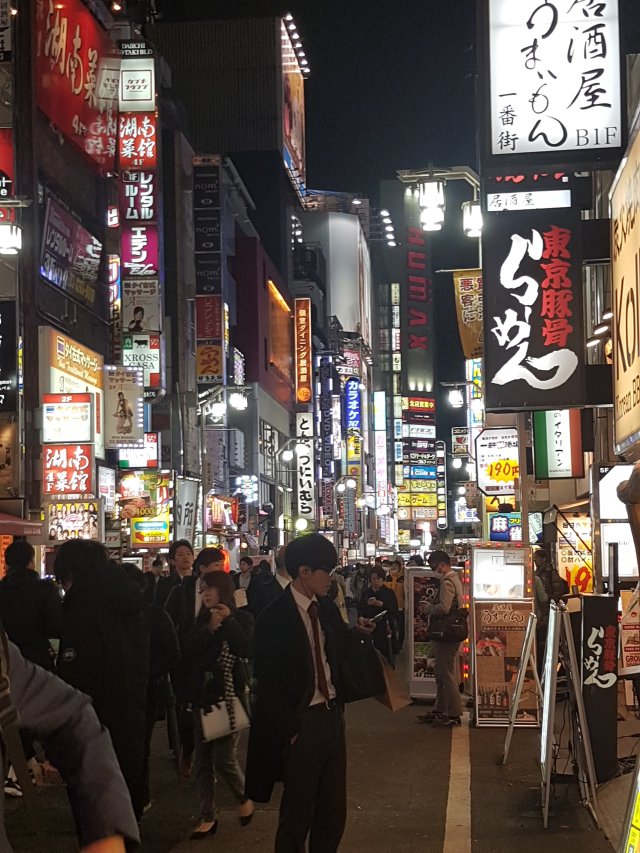 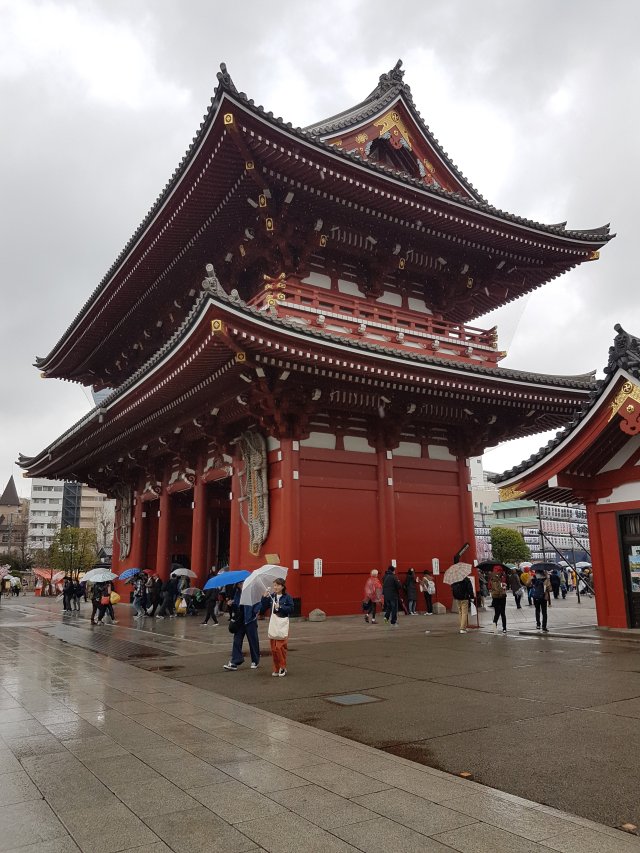 We arrived by train and negotiated the busy streets of Shinguku to find our hotel, Tokyustay. We knew the rooms would be small, but it was great. Small but perfectly formed…. AND it had a super bathroom with the high tech loo.

It took us a while to work this gadget out…it is a hairdrier!

We bought a 2 day metrocard for £8 each and set off to see as much as possible! (That shouldn’t surprise you by now!).

The metro is amazing. So many lines coded by letter and numbers. Each station can have 7 or 8 a entrances up to 1 mile apart so you can walk underground in heated spotlessly clean corridoors, often with nice restaurants and shops. Great when it is cold and rainy above.

First stop Asakusa , an area of temples, shrines and old style shops, giving a feel of what Tokyo would have been like. The Senso-ji temple was beautiful, as was the gateway, decorated with giant straw sandals!! 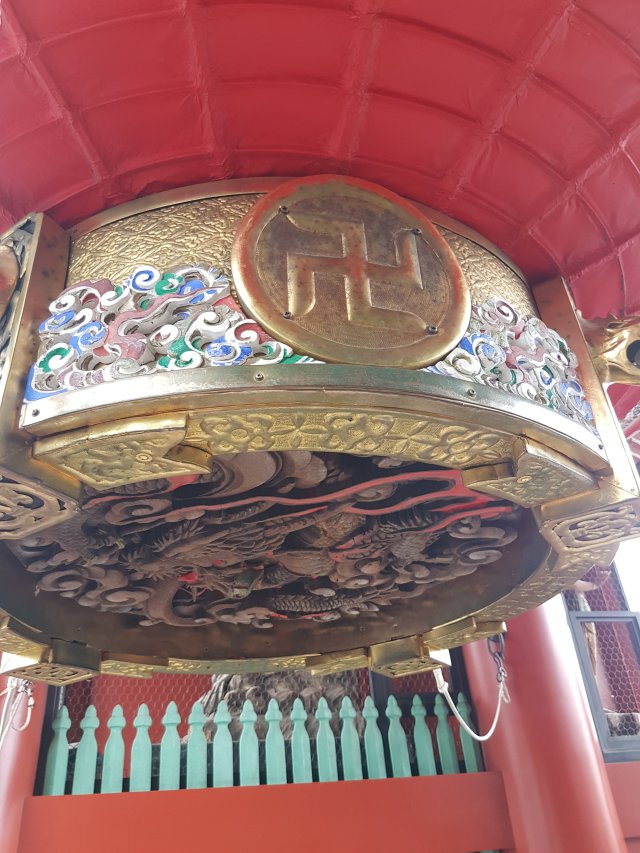 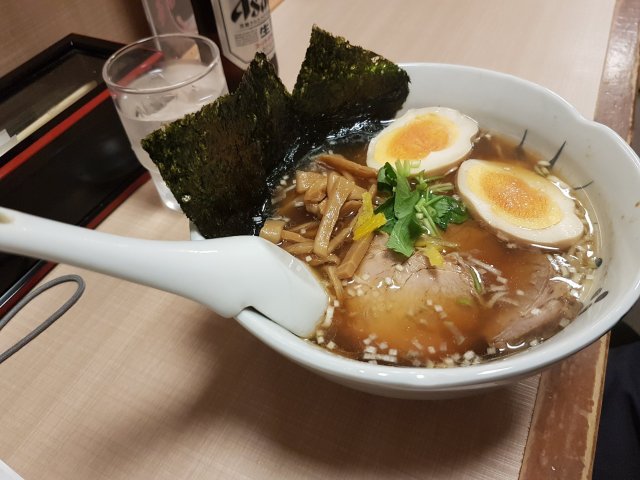 After lunch we headed to the Imperial Palace gardens. The fortifications around the palace are huge. First built in the 15th century, double moats, massive walls and double gates at right angles to each other were designed to slow up invaders!
The Palace itself was closed as the Emperor still lives there! Sadly the cherry blossom is only just coming out. Next week will be great.

Finally back to the hotel and then out for some dinner and a look in the amazing shops. You can buy anything here… especially if it has a plug or a cable attached!

We ventured out to find a restaurant. Everywhere was full! Eventually we got the last 2 seats at a recommended Tempura bar. Wow! We watched the fish and vegetables being prepared and then dipped in the lightest of batter. Meals are served on trays with little accompanying dishes of Miso soup, pickles, rice, sauces. 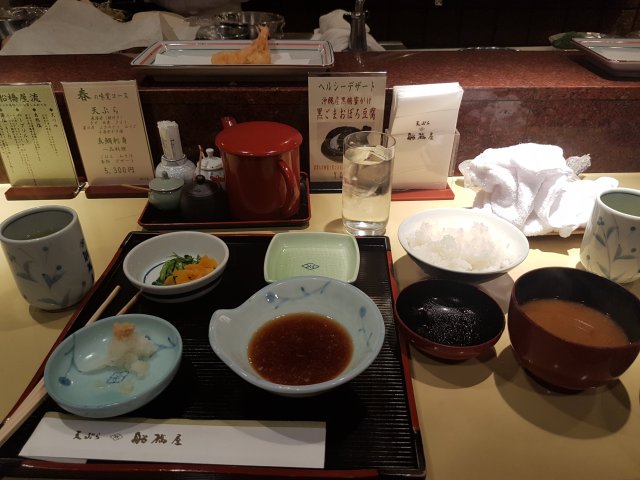 Every mouthful was delicious. We already ♥ Japan!!

Next day it rained hard! We caught the metro and wandered around the huge fish market. It seems we were a bit late for the tuna! 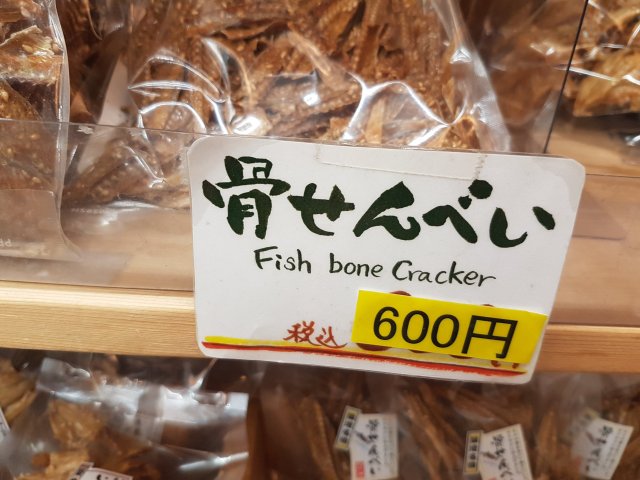 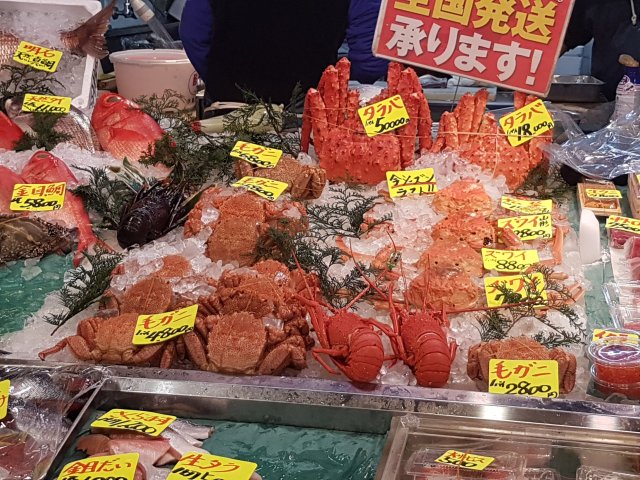 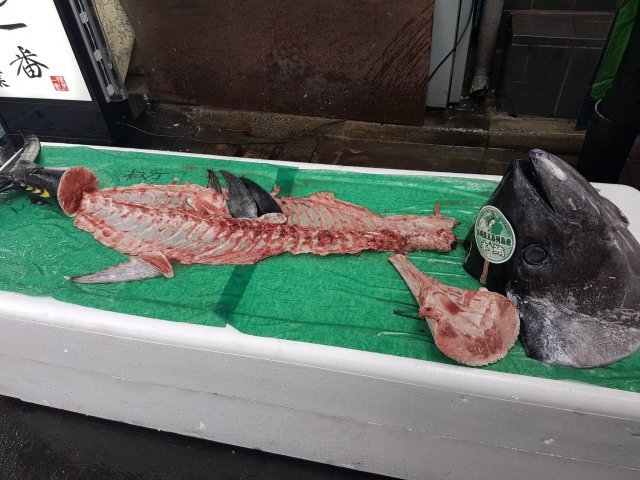 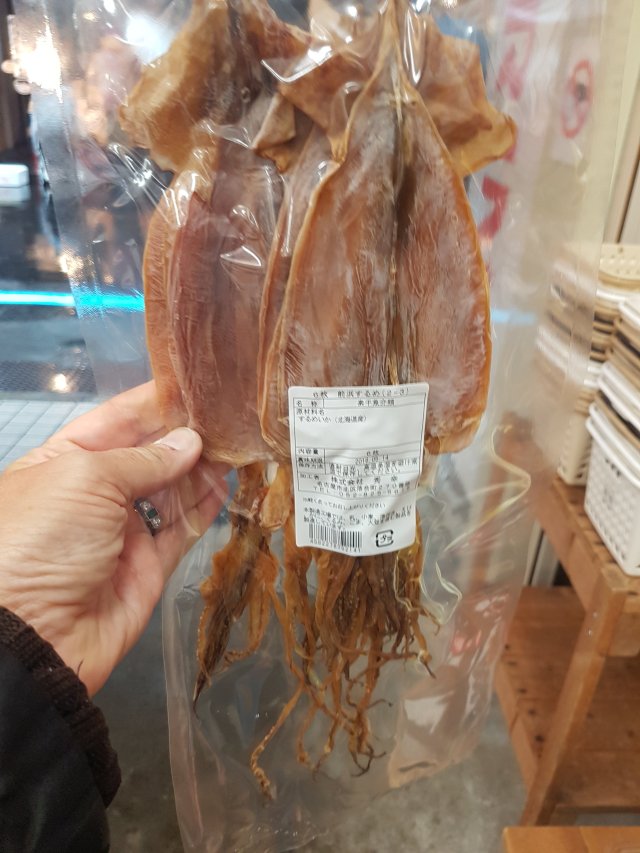 Next a metro to Ueno, a huge park containing a lot of the National museums and art galleries. We spent a few hours in the main museum, marvelling at the beautiful artwork, costumes and scrolls, some over 1000 years old. 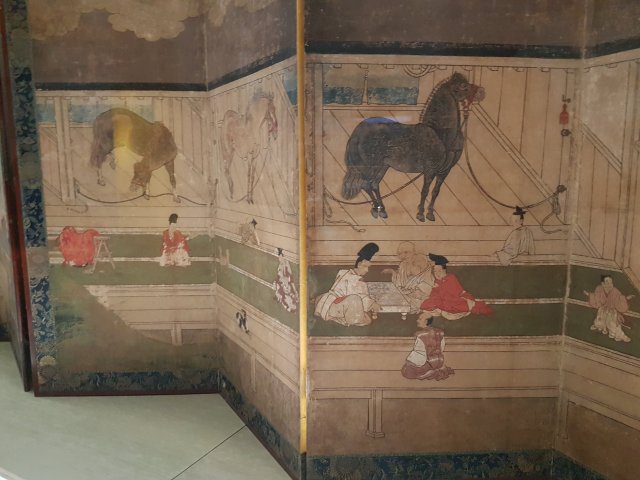 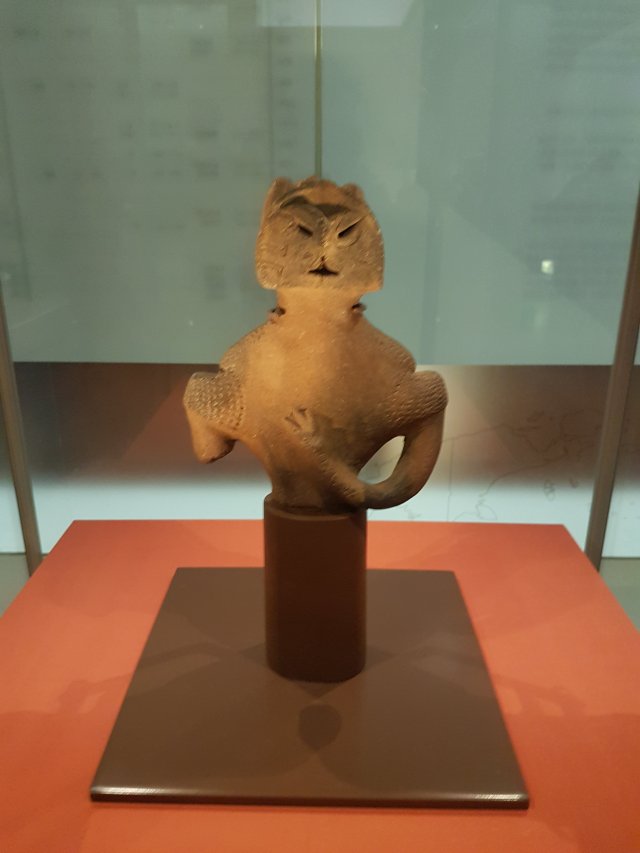 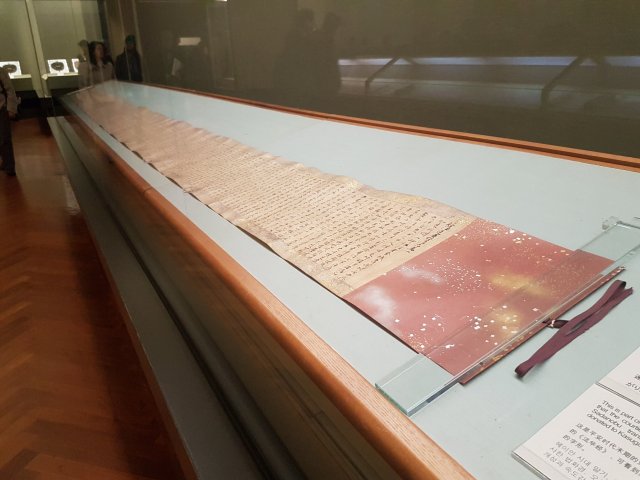 This scroll is 600 years old and sets out laws buddhist monks should live by. 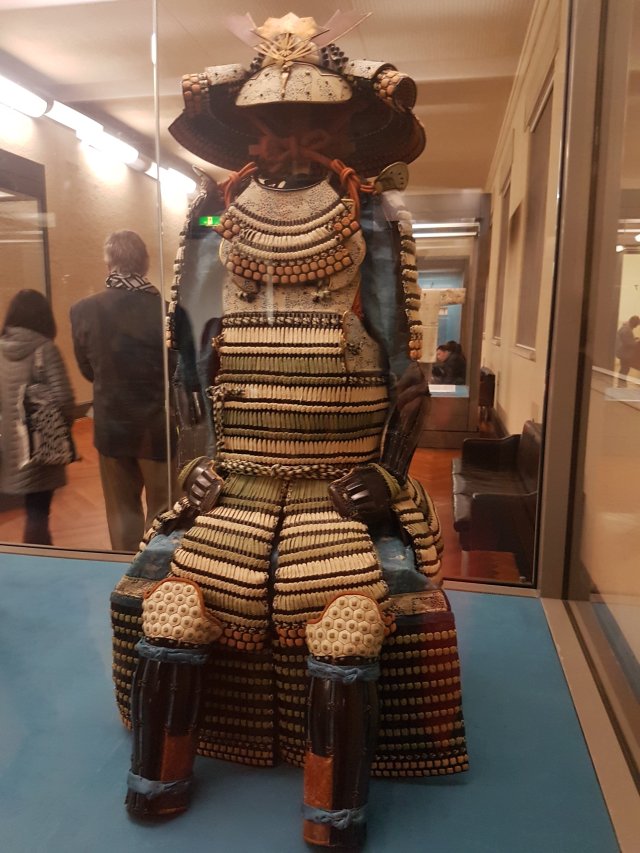 This embroidery is amazing.

It obviously rains a lot in Tokyo. Everyone has an umbrella, every shop and building has umbrella racks or umbrella bags for them, and the museum had 5 racks with numbered locks to put your brolly in and lock it up!

Finally down to Shibayo, the site of a famous 7 way crossing. We were there at a ‘quiet ‘ time. Hundreds (sometimes thousands) of people wait patiently for the green man, then all cross at once in different directions! Organised mayhem, but fun to watch!

In the evening we headed to Teppan baby, a rather lively local restaurant which specialised in Okonomiyaki… a cabbage, meat and egg pancake, with a choice of ‘extra’ toppings, cooked on a huge hot plate in front of you. Every time someone left the restaurant, all the chefs and waiting staff would shout the equivalent of Goodbye and Thank you, and bow! Great fun and yummy too! 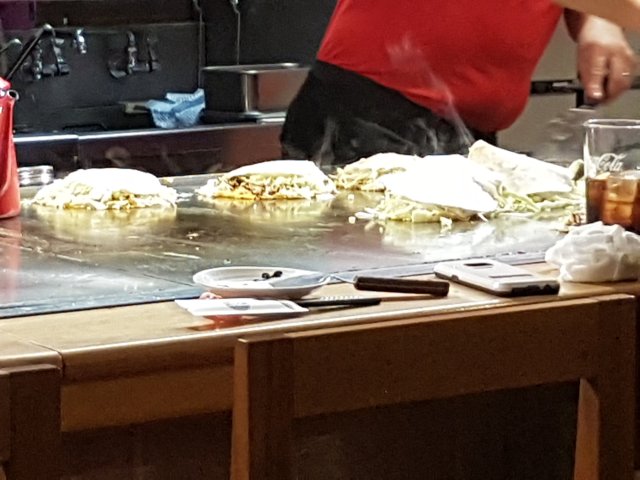 Then back to pack, because tomorrow we collect our campervan… gulp!

One thought on “Post 23 Tokyo, Japan and lots of food!”