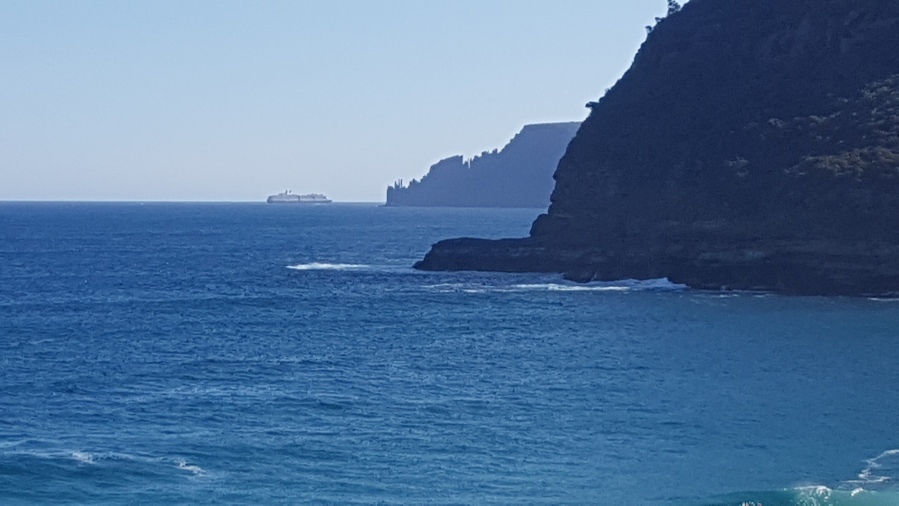 After a short flight from Melbourne across the notoriously choppy Bass Straight, hire car is collected and we’re off! Tasmania is 226 miles long and 198 wide – about half the area of England, but with a population of just 520,000, so even the capital Hobart is small and uncrowded.

There is stunning coastal scenery, beautiful rugged mountain scenery, huge forests, bushland, farming areas and tiny villages and towns. Much of it reminded us more of driving through rural England than being in Australia… until this hops by!!! 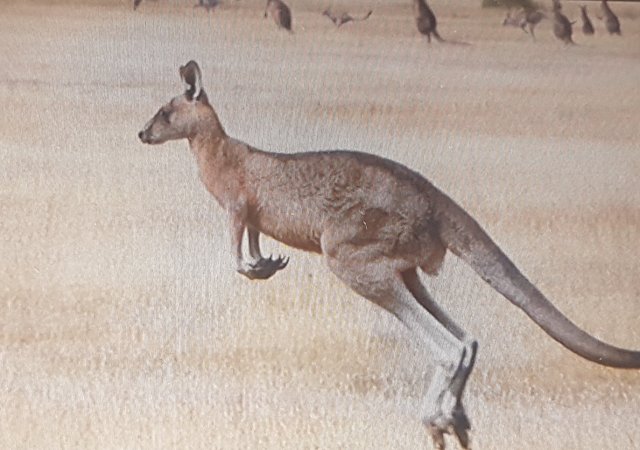 Our first day was spent on the lovely Tasman Peninsula, exploring beautiful coves and fascinating geology.. the tesselated pavement at Eaglehawk neck was my favourite. Millions of years ago, the siltstone rock cracked along natural joints, creating the shapes we see today. Subsequently, the action of sand, water and salt has eroded them… but differently. Those furthest from the sea are left for hours with salt water drying on the surface, so the flat part has eroded more than the edges, creating pans. Nearer the sea they are underwater longer, so the joints have eroded more, leaving domed ‘loaves’! 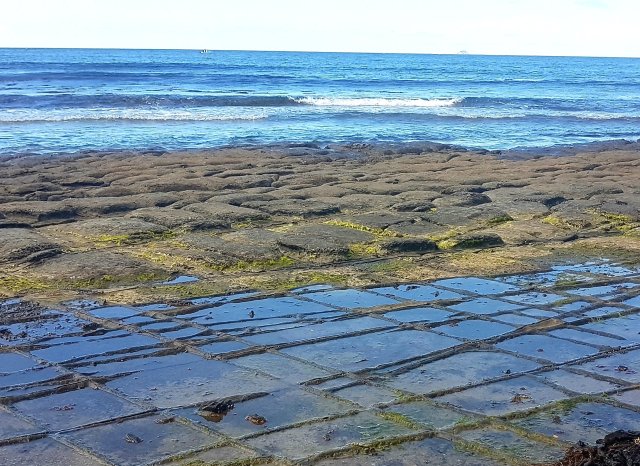 Short walks along the cliffs took us to an array of natural features – the blow hole, Tasman arch, Devils Kitchen – a collapsed arch, and the Remarkable cave. 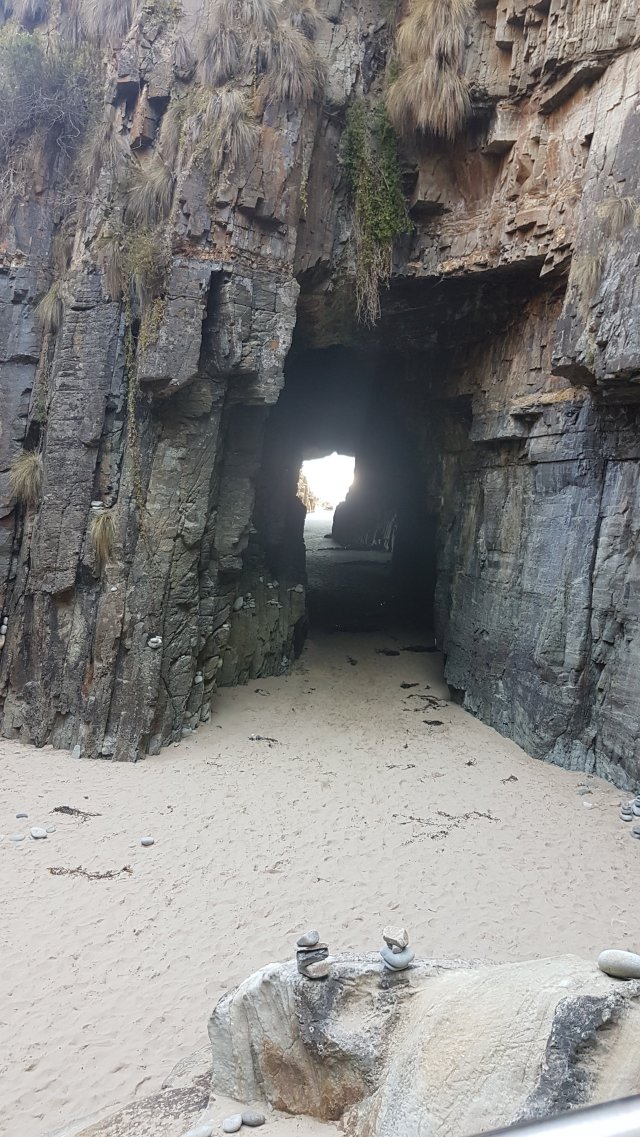 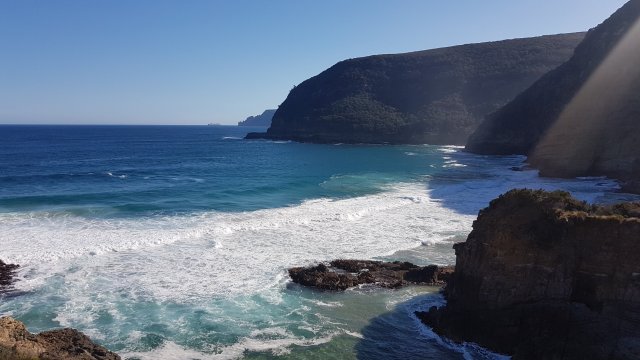 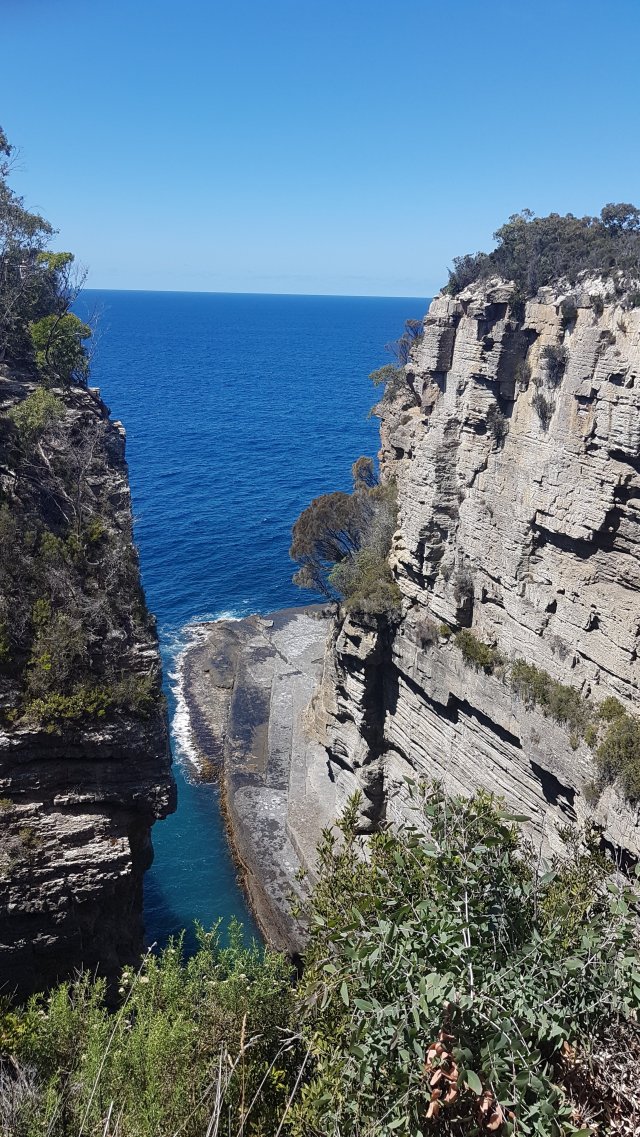 The Tasman peninsula is beautiful and sad in equal measure, as it was the location of the infamous Port Arthur penal colony, the first to be established.

The peninsula is linked to the mainland at Eagle Hawk neck, a narrow, 30 metre strip, so this was the site of the feared dog line. No convict would escape by land. 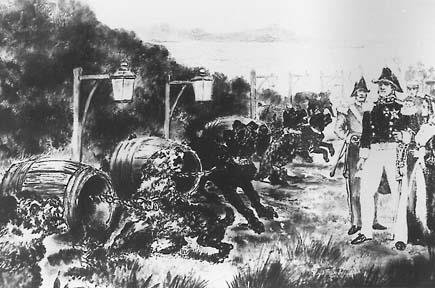 On a warm sunny day, the honeyed sandstone ruins of the penal colony made it harder to imagine the awful conditions and punishments here. 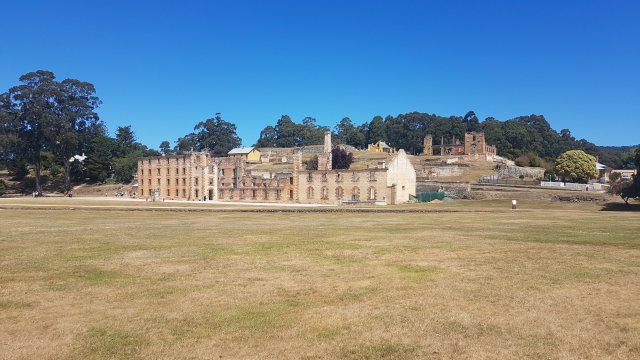 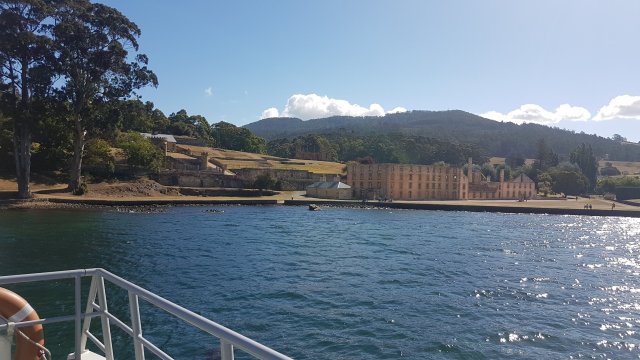 It started well, aiming to give prisoners trades for their future lives, but eventually sank into a harsh, punitive regime, using solitary isolation as a misguided method of reform. The worlds first boys colony was here too, on a separate island.

Onto our great air bnb in the riverside Hobart suburb of Bellerive. Day 2 dawned bright so er drove to the top of Mount Wellington. Astounding views and a nice walk to view the dolerite columns that make up much of the top. 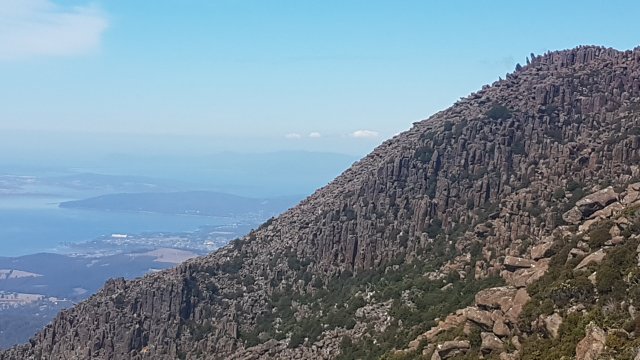 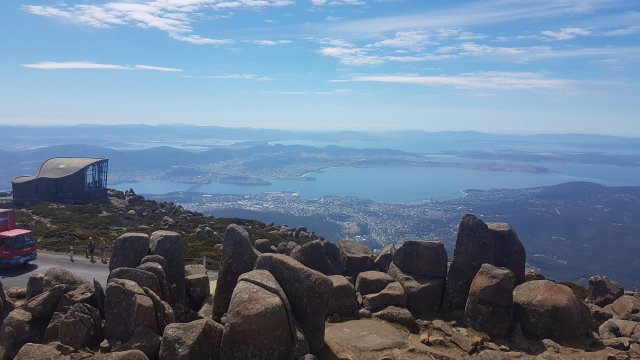 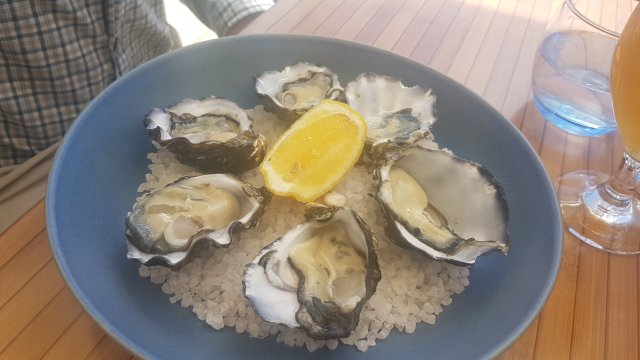 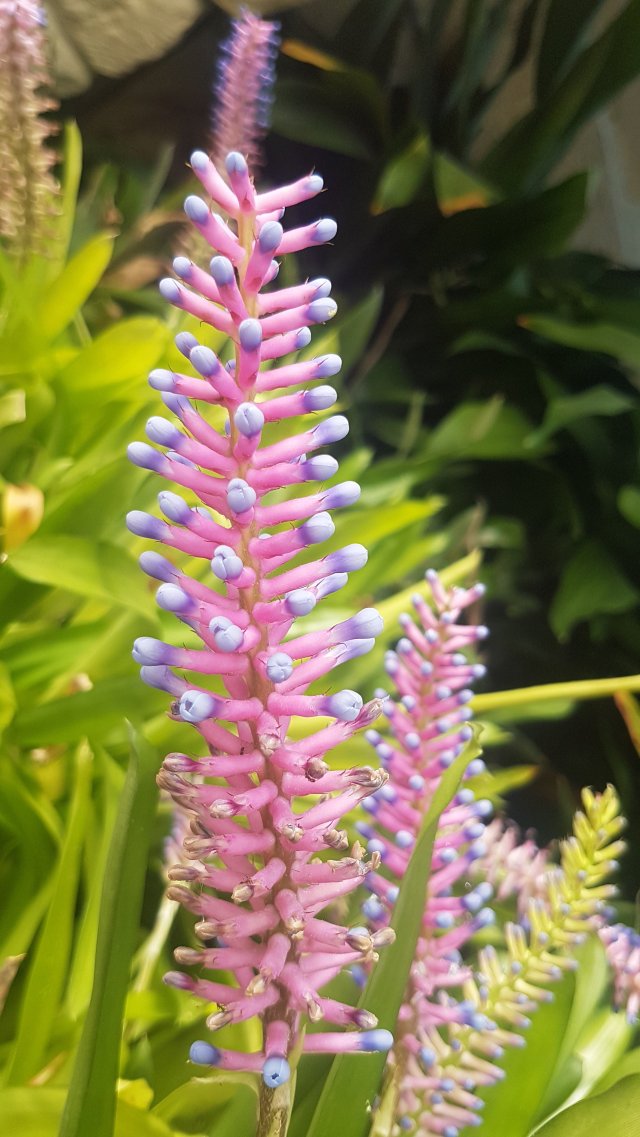 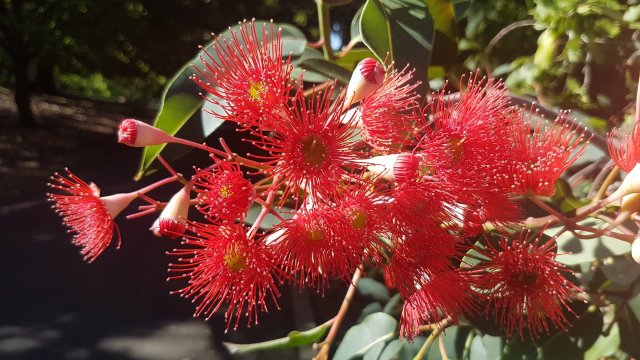 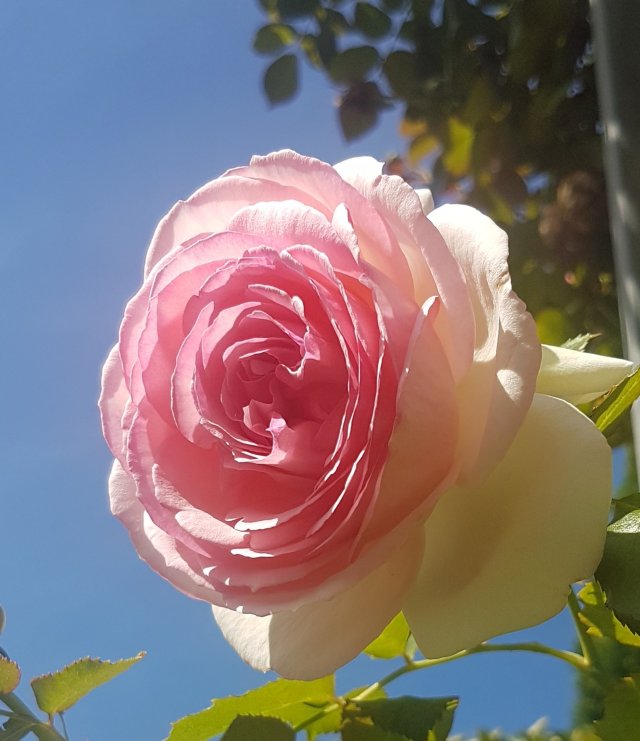 Then back to BnB, carefully selected as just 3 minutes walk from the Hobart Cricket ground.. and we had tickets for England vs Australia T20 game. I had no idea where seats were.. turned out they were right next to Australian players tunnel! Luckily, they were a fairly kind crowd, so we survived! Sadly, after a great start, England weren’t quite good enough, and we ended up cheering with the Aussies when Maxwell won the match for them, getting his century with a 6 on the final shot of the match. Lucky really, because our BnB host might have locked us out if England had won! 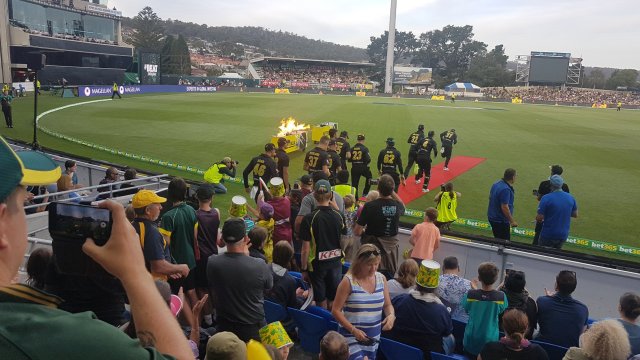 The next 6 days are spent touring the island. We stayed in 5 Air BnBs ranging from a modern luxury annexe to a mobile home cabin by the beach! All were great, and about 60% of the price of a hotel, with far more amenities.

Here is a summary of our tour!

Up the east coast visiting Buckland church with 14th century stained glass windows from Battle Abbey, brought over by ship in the mid 1800’s. Then magnificent Freycinet National park whete we hiked up a very big hill for a view of beautiful wineglass bay. 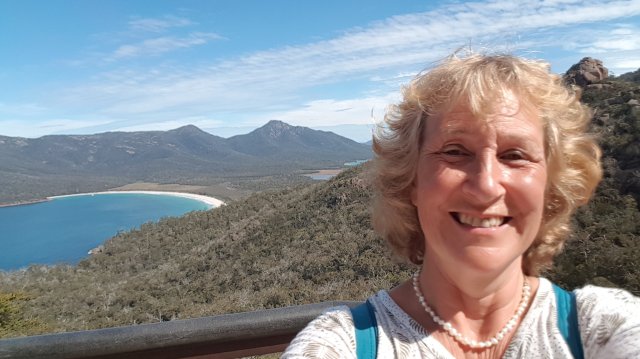 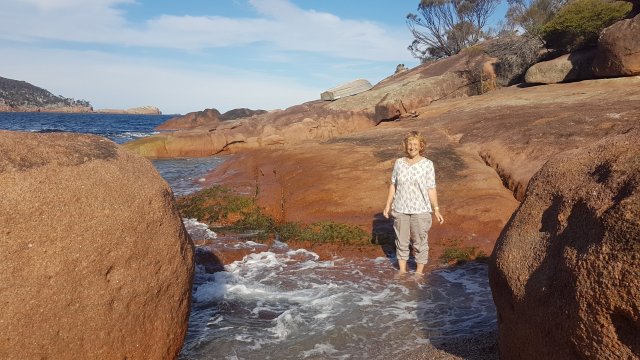 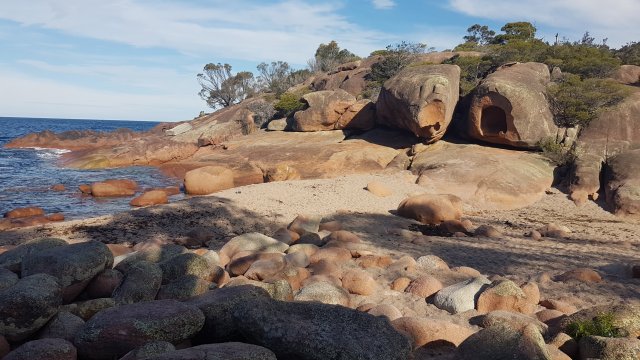 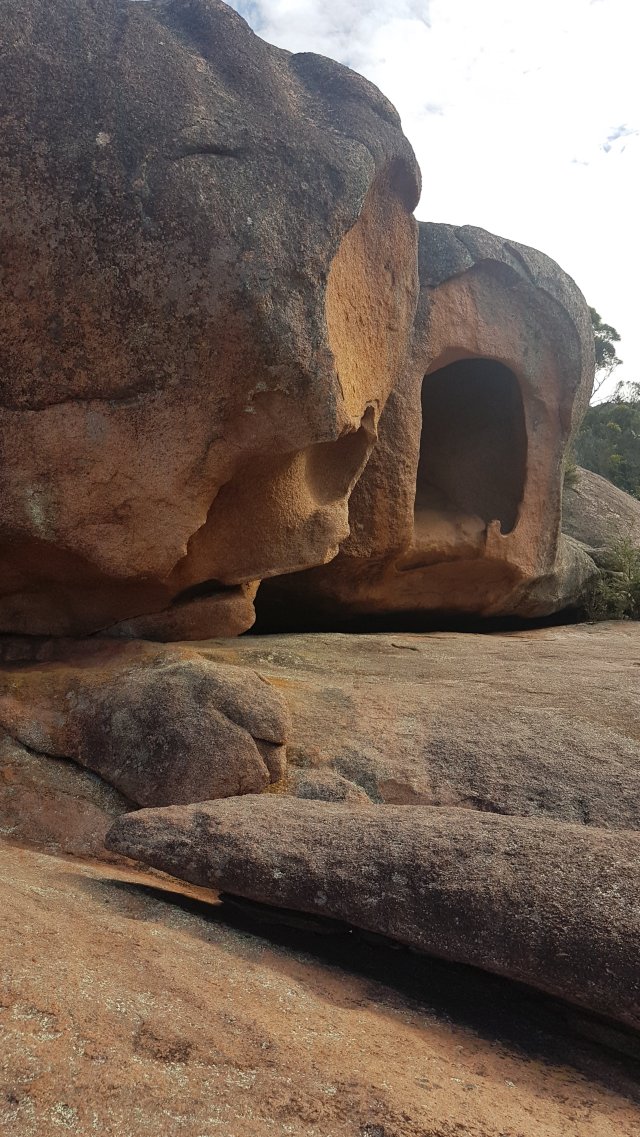 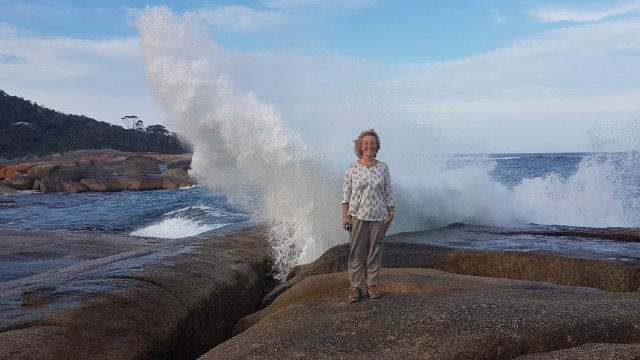 This meant a night time drive up a twisty pass to our accommodation – dodging wallabies and possums on the road.

Next day, off to Cradle mountain National park. Lovely long hike around Dove Lake at the foot of Cradle Mountain. Saw echidna and snakes! 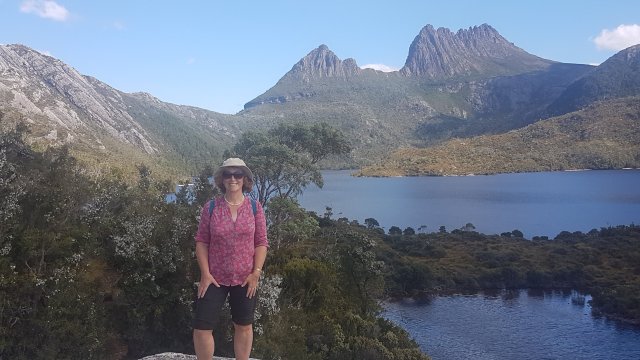 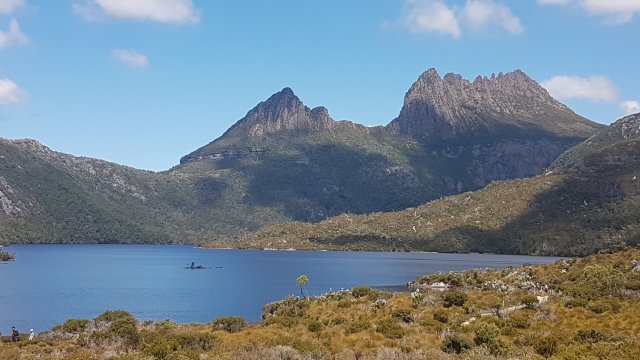 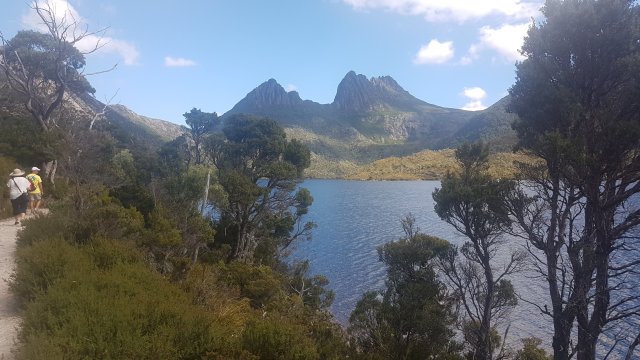 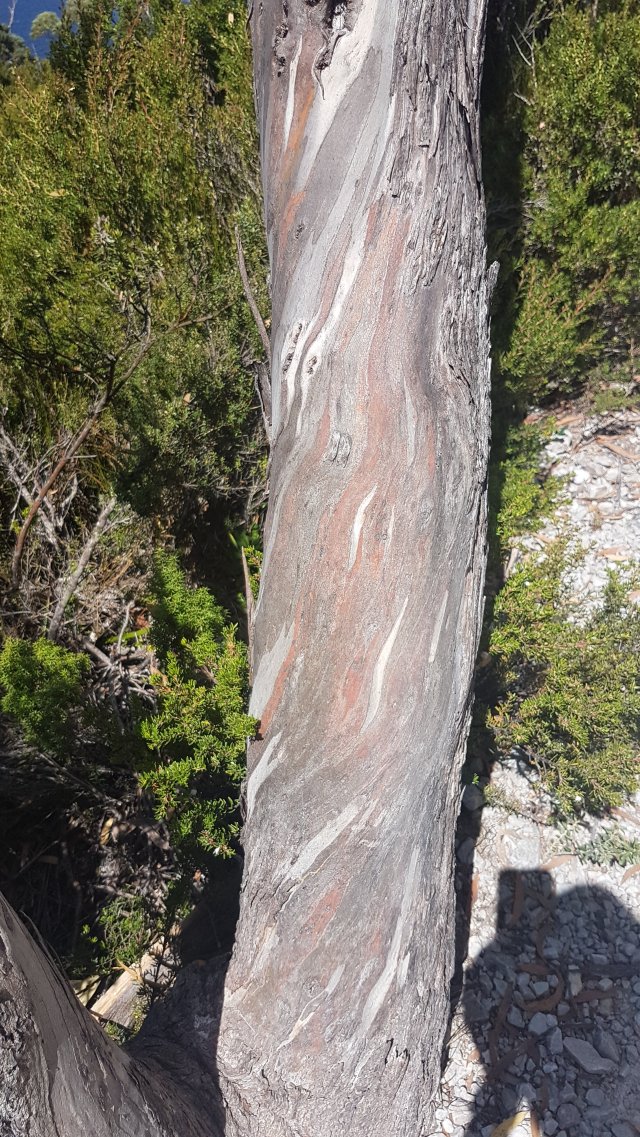 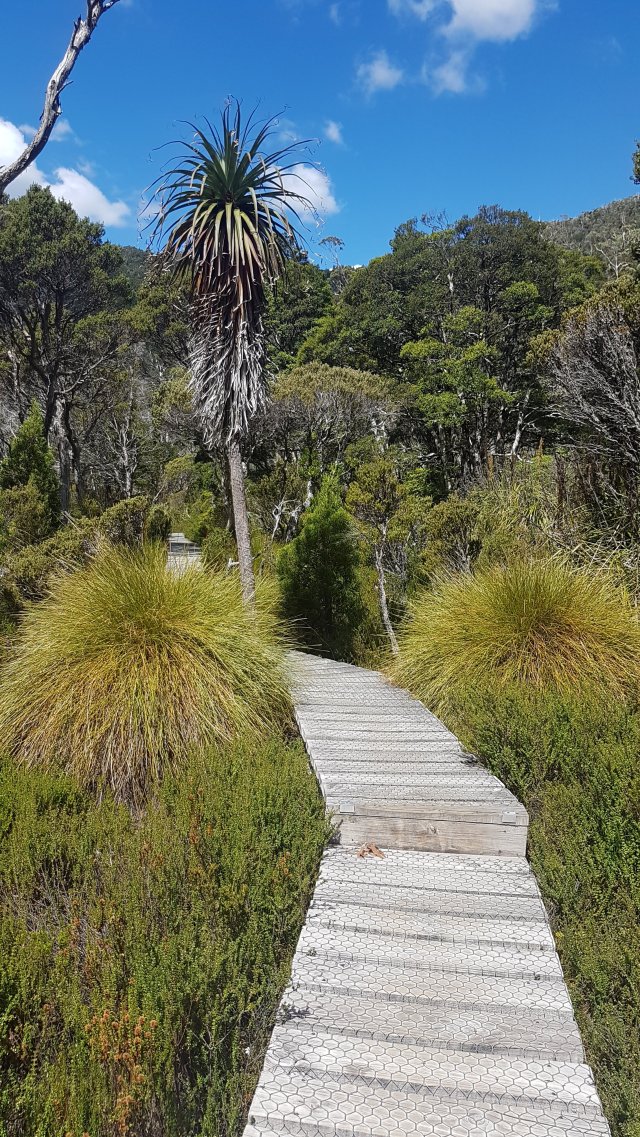 Staying at pretty Port Sorrell on N coast, we stumbled upon Moroccan night at George and Dave’s cafe. Walking back at dusk with Wallabys on the pavement, and a possum jumped down from a tree making us really jump! Slept with door open as it was so hot. The sounds of the wildlife were amazing, including possums raiding dustbins!