So, one of our challenges was a Bimble in Boris every month this year. We didn’t have much time left for January so we seized the moment. The beauty of Boris is that he never seems to suffer with damp so we can get him ready with just a few hours notice. I had to work in West Sussex (about 100 miles from out home in Dorset), running a parent workshop on Tuesday evening this week. Chris had Monday off, so, …perfect opportunity for a Bimble.

We decided that we wouldn’t cook in Boris this time (great excuse for some January meals out!), and so we set off at 1.00 Monday. Within 20 minutes we had agreed it would be far more sensible to eat a main meal at lunchtime so that we didn’t have to go out looking for a restaurant on a dark, windy night. Hmmm – we were just about to pass one of our favourite New Forest pubs – The Oak Inn at Bank, near Lyndhurst. 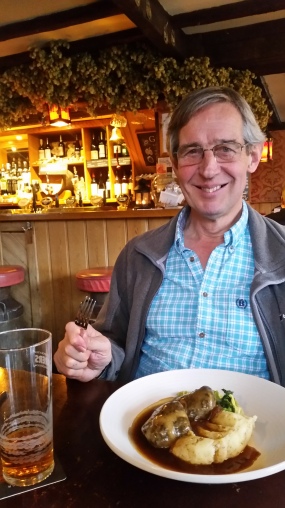 www.oakinnlyndhurst.co.uk We hadn’t been for a while and….   well why not?! They had a table and we enjoyed a really great Winter’s lunch. It is a wonderful, traditional Forest Pub and with it’s fire, was lovely and warm. They have an excellent menu, but we went for real winter warmer food… well…we did AFTER we shared an excellent Greek Meze platter to start! Chris had Game Faggots and I had Calves Liver with Horseradish mash. Both were superbly cooked and very tasty – just the job!

Then, off we went. The intention was to stop at Horndean in Hampshire where my father had grown up, to look for my Grandpa’s grave. He was Lieut. Arthur Henry Warburton, R.N, and he died in 1949, so I never met him, but I wanted to find it. Success in the Victorian churchyard, and the grave was covered in Snowdrops which was rather nice.

Then on to the Chichester harbour area, where we found a place to stay at Cobweb’s campsite on the Cobnor Estate on the edge of Chichester Harbour. Their actual site was too wet due to the almost endless rain we have been having, but they found us a place in the farmyard – right next to a boat – useful if it keeps raining!

Apart from the wind it was so silent and we slept very well. Having electric hookup meant we could put the electric blanket on which was lovely!  Next morning, a path from the site led us to the edge of Chichester harbour and we did a pretty, but blustery walk for a mile or so before turning back. Lots of birds but all very hunkered down against the wind.

Then into Chichester where we parked on the Festival Car Park without difficulty – £3.90 for 5 hours, and an easy walk into the centre. Chichester is a small but beautiful city. We visited the Cathedral which is unique in its collection of 20th-century paintings, sculpture and glass. These include a window by Marc Chagall, a tapestry by John Piper a beautiful copper font and a painting by Graham Sutherland.  However the art in the Cathedral also contains some wonderful early objects including the 12th century Lazarus Reliefs and the 16th century Lambert Barnard paintings. We also visited the interesting museum in the Novium building. Both were free admission and worth a visit. The Novium is built on the site of a partially excavated Roman Bath house.

Finally a visit to a restaurant – you guessed it – there had to be food here somewhere. I had found Amelie and friends on Tripadvisor. http://amelieandfriends.com It was situated in a beautiful old building in the heart of Chicester. On entry we were greeted warmly and shown to our table. The restaurant was fully booked on a Tuesday in January – a good sign!
The menu was lovely, with a good range of choices. The portions were not huge (that suits us – although the fish pie was pretty generous) but the quality of the produce, the taste and the preparation/presentation were wonderful.

Chris had ham hock with baked apple to start, and homemade Fish Pie which he said was superb. I loved my Goats cheese and pear starter, and for main course I had John Dory with roasted fennel…mmmmm.
The desserts were gorgeous, and too tempting to resist. We both recommend the Kir Royal Souffle and the Moelleux de chocolat. Wow.

It was a lovely lunch on a wild, wet and windy day!

Then we had to drive to Billingshurst where I was to work. A quick change into work clothes, a cup of tea for Chris and a game of cards while we waited for the start time… that is the beauty of the camper van. We could have had a light snack as well…but we were TOO FULL!!!

The workshop went really well, finishing at 9.00pm – but then we had the drive home in the teeth of a pretty ferocious storm. At times the rain was being driven horizontally. We made it home by 11.15, having really enjoyed our short, but productive, January Bimble!