We awoke to find a very normal looking campsite in the daylight, if rather empty. We set off promptly for our main objective of the day – The Foz de Lumbier!  A foz is a gorge!

Parking was easy by the entrance, and as we started to walk towards the gorge, a huge bird swept through the sky and flew through the opening in front of us… a Lammergeier. The largest vulture in the Pyrénées with a wingspan of 2.7 metres! Fantastic, especially as they are only occasional visitors to this gorge. The main residents were waiting for us around the corner. Griffon vultures. Lots and lots of them at different places along the magnificent gorge.

Flying, soaring on thermals or just perched on the crags, they were amazing to see.

We saw egyptian vultures and a booted eagle too. The sky was also alive with Crag Martins and Swifts. You could walk the whole length of the gorge, because amazingly a railway had been laid high along one side, and the path followed the old track. Through 2 long tunnels as well! It was incredible from start to finish for both the spectacular scenery and the birds.

We had been expecting rain by 11am, and so had planned to spend a wet afternoon in the city of Pamplona… BUT by 11am it was still sunny so we changed plans and headed up into the mountains for some more walks, birds and scenery.

Next stop the Foz de Abayon about 10km up the road. Not possible to walk here, but the view from the mirador was so beautiful. 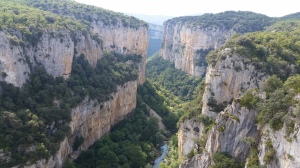 And still the sun shone, so we decided to test Boris on mountain roads and follow a tour I had found in a book!!

Chris was a hero for braving it! He drove miles and miles through gorgeous valleys and hills, with twists and hairpin bends everywhere! Spain has used it’s EU money wisely, and the roads are really good quality, they just kept getting narrower! Suddenly we were on a remote pass on top of the Pyrénées. The views were awesome, but there were some very menacing clouds in one direction.

We were aiming for a nature reserve…the Bosque d’Irati, in one of the most remote and untouched forests in Europe. We got there in the end… the very end of the road! Truly in the middle of nowhere.

We did a 4 mile hike through beautiful natural forest.

It had a Jurassic park feel about it, and that was only compounded when we saw a stunning Salamander on the path. Ok…it isn’t a dinosaur…but you don’t see one of those everyday.

Our other remote hope was to see a very rare bird… a white backed woodpecker. Suddenly we heard a bird calling. We scanned the trees and there it was. We were able to watch it for about 10 minutes.

There was not another person for miles. It was an astonishing place.

We then had to drive 24 kms back along the twisty road… still having dodged the rain, but the pass was in cloud for our return. As we descended out of the mist we went by a really isolated farm, where all the sheep had newborn lambs!

Another 35kms of twists and turns brought us to Roncevalles and Camping Urrobi.   This was an excellent site and enabled us to catch up on all the usual ablutions and jobs.

We had a lie in!! Set off at 11.30 and headed on across the Pyrénées. More twists and turns but then… a small autoroute with tunnels to iron out the bends. A welcome rest for Chris’ arm muscles and for my vertigo… I was a quivering mass of jelly on some of the bends yesterday! I must say though,  that there is so little traffic on these roads that we had hardly any need to stop or reverse on the narrow ones.

Our first stop was the Jardin botanique de Senorio Bertiz, high in the mountains. Laid out in the 19th century in a tiny corner of his vast family estate (which is now a national park), it was a sweet garden with many thriving  examples of trees from around the world.  We picnicked here in the hot sun and watched pied and spotted flycatchers swooping by.

Then we headed down out of the mountains, knowing that we also left peace and tranquility behind. We hit the Atlantic Coast at Irun so that we could visit an unlikely bird reserve. It is in the centre of town, sandwiched between the airport and the railway depot!

Txingudi (This is not a spelling mistake. We are now in Basque country. .X’s everywhere!)  is, however,  an internationally important wetland, especially at migration time, when it serves as a stop off point and watering hole for migrants on their long journeys north or south.

It was a magical place as it also looked out onto the Bidasoa estuary with Hendaye in France to the right and Hondarriba in Spain to the left. We added several birds to the list here, but the stand out one was an Osprey perched on a pole in the harbour eating his recently caught fish.

We then drove round to Hondarriba where we had been told we could park for 10 euros in an aire. As we drove in, the roads got busier and busier. Obviously something was ‘going on’.  We reached the aire at the far end of town which was part of an enormous carpark by the beach. There were campervans everywhere. We found a space and it was time for Google!

It turns out we had arrived on the final day of the 4 day festival of the Virgin of Guadaloupe, a major event in the Basque town’s calendar, because she saved them from a seige by the French.

We couldn’t see where to pay so I went to ask the van next door. They were french, and asked me if I knew why it was so busy. I knowledgeably explained about the festival….but left out the part that they were celebrating escaping the french!!

Anyway…the good news was…there was no charge for the night’s stay!

We walked into the town. 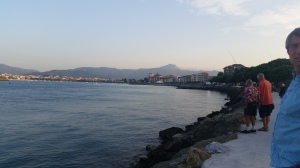 It was a truly delightful old town of Basque houses with little verandas. 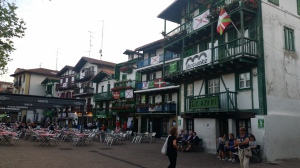 Definitely worth a visit. The whole town was en fête,  and there were lots of photos up of the previous day’s parade, where everyone was in Basque national dress.

We came upon musicians, singers, dancers, a fair, a market, and hundreds of people everywhere enjoying the party.

We came back to Boris, when, at 10.30pm, the whole car park shook and several van alarms went off. The fireworks had started. We had a grandstand view from Boris.. wasn’t it kind of them to lay on such a great welcome!

We had been worried that the party would make it a noisy night, but all was quiet and we slept well. The new mattress topper in Boris is SO comfortable!

A grey day with rain forecast. We planned to go to a Basque boat building museum in San Pedro but another fête meant parking was impossible so we headed to Carrefour to do some Spanish shopping and fill up with fuel…79p a litre! Even with all the mountain driving Boris is still managing nearly 30mpg which we are very happy with.

I secured a reservation for lunch at a traditional Basque restaurant Agorregi jatetxea as a treat because my birthday present from Chris is 2 meals out at restaurants of my choice.

And what a treat it was!

We both chose the Gourmet plus menu. 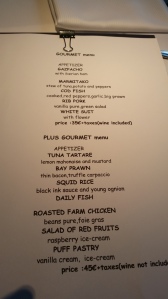 You may be looking at the menu and wondering ‘What did they choose?’. Well the point is…you don’t choose…you get everything! (And Fish of the day was Hake with crab!!) 8 wonderful courses pictured below!! Every one was delicious. I am writing this at 9pm and we don’t seem to be at all hungry!! 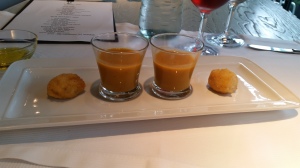 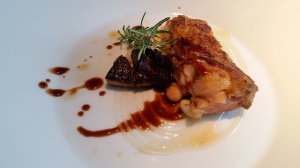 After lunch we decided to head West to find the beautiful Basque coastline. We found a campsite – Camping Itxaspe – that looked good and drove to it, only to find we had stayed here 4 years ago, but then we were in a tent!! Very good value – 16 euros including electric if you have an ACSI card, and the views of the coast are superb. Now we are enjoying a relaxing evening and catching up on jobs. Night night!