Well we wanted to go in search of the sun, and we certainly found it!

The last 3 days have seen temperatures up in the 30’s, and only dropping to about 24  at night. That is over 80 degrees Fahrenheit for us oldies!

Now we love Boris very much BUT after a day at those temperatures, it is like going to bed in a tin can….which is being boiled in hot water! (Does anyone among you remember Fray Bentos steak and kidney pies in a tin? !!)

We actually cheated for a few days and slept in a house, staying with Ron,  my friend from California who has a house in Laurens, a charming and historic village in Languedoc.

His house is charming, and from the garden the view extends to the Pyrénées. 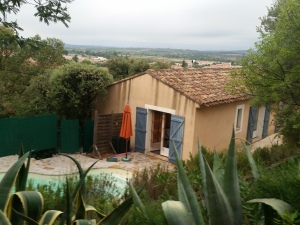 He looked after us very well.

We had a super meal at the Abbaye Sylva Plana vineyard…including this amazing lime cheesecake!

Saturday was market day in Pezenas. Super and huge market.

Later, on a rather hot walk along the Canal du Midi, we saw where the historic, shade giving plane trees have had to be removed because they are diseased. http://www.theguardian.com/world/2015/aug/17/more-plane-trees-felled-along-canal-du-midi-in-fight-against-killer-fungus Apparently they are digging huge pits and burning them in situ. They will replant but it will take years before the iconic tree shaded banks are back. Very sad.👎 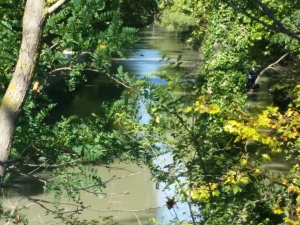 10 Facts you may not know about…. The Canal du Midi

1. It was built between 1666 and 1681 by Pierre-Paul Riquet to transport Wool, wheat and wine from the Atlantic to the Mediterranean avoiding the need to sail aound Spain.

2. It was first planned 100 years before that, but he was the person who worked out how to get water into it.

3. It is 150 miles long stretching from the Etang du Thon on the Mediterranean,  to Toulouse where it links up with

4. Reservoirs were built in the Montagne noire,  and then the water was channelled to fill the canal from the highest point, just east of Toulouse…  that’s some bath to fill!

5. There are 63  locks which are unusual because they are oval in shape which makes them stronger.

7. The Malpas tunnel, which we walked through, was the first navigable tunnel built anywhere in the world.

8. The canal is lined with plane trees which provide shade and hold the banks together. In the past, mulberry trees were used, and silkworms supplied the silk industry.

9. It is a UNESCO world heritage site.

10. In 2004 Chris helped Pete and Penny and Lottie  sail their Dutch Barge Merlin (55 feet long, weighing 35 tons!) up the whole length… including all the locks… most of which were uphill!

Sunday we did a great walk with some members of a local walking group near Olargues.

The mountains were stunning, and thanks to a navigational error we walked 14km instead of 10km!! We were however fortified at lunchtime when Gordon produced a bottle of Pastis, explaing that it was a club tradition to all have some with our picnic! Well it would have been rude to refuse!

Then there was sausage night at a local vineyard! We know how to live it up!

Today we are stopped for the night at Port Vendres near Collioure and just about 7 miles from the Spanish border. Pretty port town, but most restaurants closed on Monday  grrrrrr! 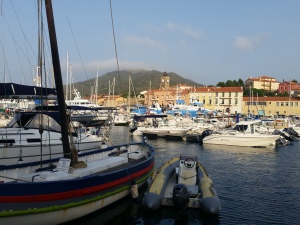 We didn’t want to use the cooker (too hot) so had a yummy salad!

We have dispensed with the 4 tog duvet ( I cannot mention togs without thinking of Rhod Gilbert’s brilliant tog sketch.) We are lying under a thin sheet listening to thunder rolling around the mountains and cicadas chirruping!

Tomorrow we take Boris to Spain!(I suppose technically he takes us!).