So, we are on a proper Bimble WITH Boris! I wasn’t planning to write a blog, but 2 different people today asked “Where is the blog?”, so here it is! In big chunks!!

‘To bimble’ means to wander, and we set off from home with nothing booked at all except supper and a pub quiz with Peter and Tracy in Bracknell! Our goal was to head north for Scotland, but with unsettled weather ahead, our itinerary would be flexible to try to chase the sun. Or the bright days. Or even the drier days. Or even the days with a few gaps in the rain!

During an uneventful drive up the M1 and A1, it was decided that our first stop would be Northumberland.

We never seem to make it past this beautiful area without stopping for a few days. Plus the weather there was lovely… less so further north. Having had a few problems with Boris prior to leaving, we wanted the first few nights on campsites just to check everything was ok.

Now winging it is great fun… but this was late May Bank holiday weekend, and the start of school half term… how would we fare getting a pitch?

All the big sites were full or, understandably, wanted a minimum stay of 3 nights. However, we were very lucky and had 1 night at Pippin’s Park, a 5 pitch Caravan and Motorhome club certificated site in a great location about a mile from our favourite place, Low Newton.

Or do I mean our favourite pub… the Ship Inn, with it’s own microbrewery. The pub was fully booked, but Chris’ soulful expression meant they squeezed us in for a fabulous dinner, followed by a glorious evening walk along the cliffs.

The best night’s sleep I have had in ages was followed by a visit to 600 year old Alnwick castle.. a place we had never visited before. Our HHA membership gave us free admission! A true castle residence, it is home to the Percy family, the 12th Duke of Northumberland. We took the free guided tours, and each one was fascinating.

Today’s top trivia… Harry Hotspur was Henry Percy, 5th Earl of Northumberland. He was a medieval superstar on the battlefield, and got his nickname because he rode into battle so fast his spurs got hot!

When a certain football club was formed in 1882, Harry’s attacking spirit saw the north London Tottenham side adopt the term Hotspur in their name.

Alnwick castle has also been used extensively in films and TV, most notably as Hogwarts in Harry Potter… Chris wouldn’t let me have broomstick lessons which were on offer… he said I didn’t need them…..!! 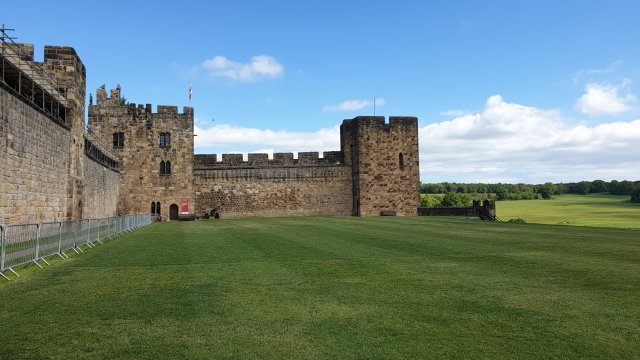 It was also used in series one of Blackadder… no coincidence that Blackadder’s hapless friend was Lord Percy?!

Next stop was the amazing, huge, Barter bookshop in Alnwick. This is the largest secondhand bookshop in Europe. It is converted from the old railway station, and, much to Chris’ delight, had model railways running round above the shelves!

Not only great books, but a super little cafe, armchairs and open fires means this great spot is busy all the time, and yes, you can take in your old books and barter for replacements! Another claim to fame is that, in a box of books bought at auction, the owner found the original wartime KEEP CALM AND CARRY ON poster that has since been reproduced in thousands of formats!. The original is on display in the shop!! 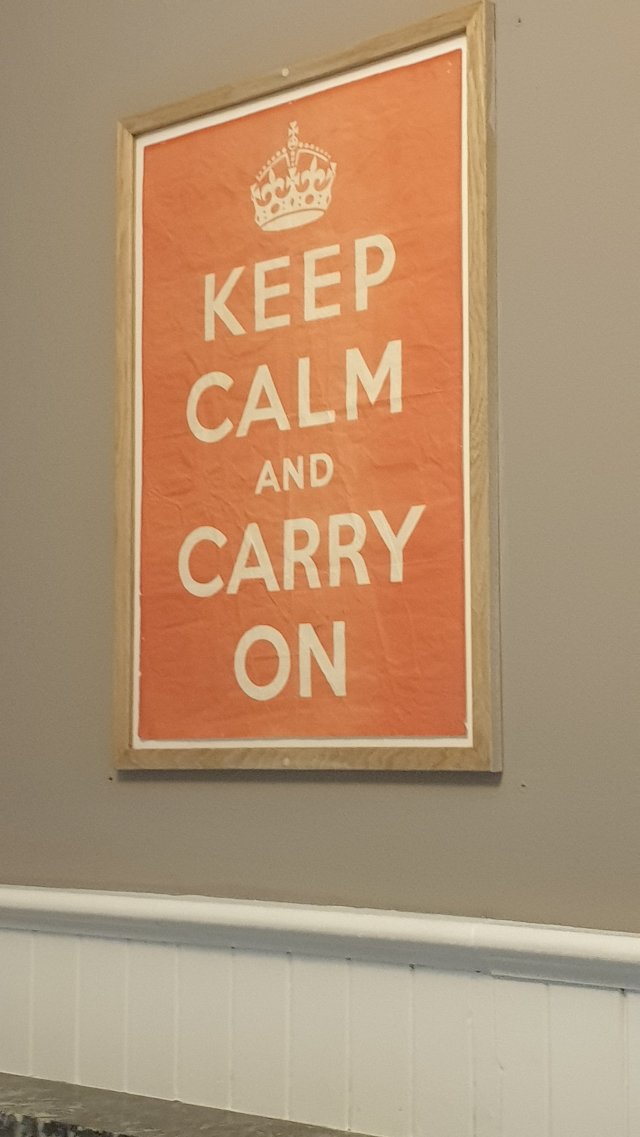 We had managed to get 2 nights on the Glororum caravan park, a mile from Bamburgh, so after checking in, we caught a bus to Budle Bay, and did the wonderful coast path walk back to Bamburgh. 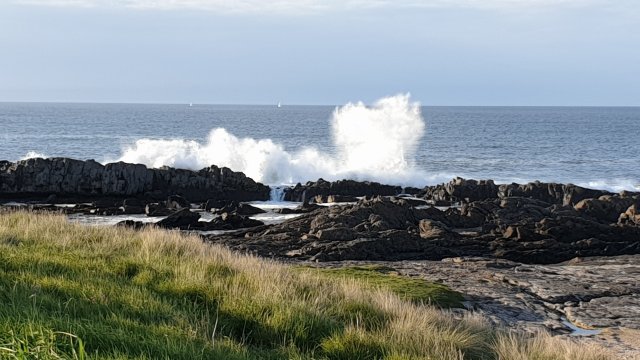 The castle towered ahead of us, with amazing carpets of pink campion all around.

Next day, and we had booked a boat trip with Billy Shiels from Seahouses, to travel out to the Farne Islands just offshore. We have done this trip several times before, but each time it is sensational. The Farnes are home to literally thousands of breeding seabirds. Even if you are not keen birdwatchers, you cannot fail to be amazed at the spectacle. We sailed past cliffs where every inch of space was occupied by a nest precariously perched on a minute ledge. Their eggs have pointy ends so they roll in a circle and dont fall out!!

Guillemots, Razorbills, Kittiwake and Shag jostle for space, and fill the skies and the water.

Then, there are the seals… huge and imperious, resting on land, then slipping into the sea and gliding past like rockets! 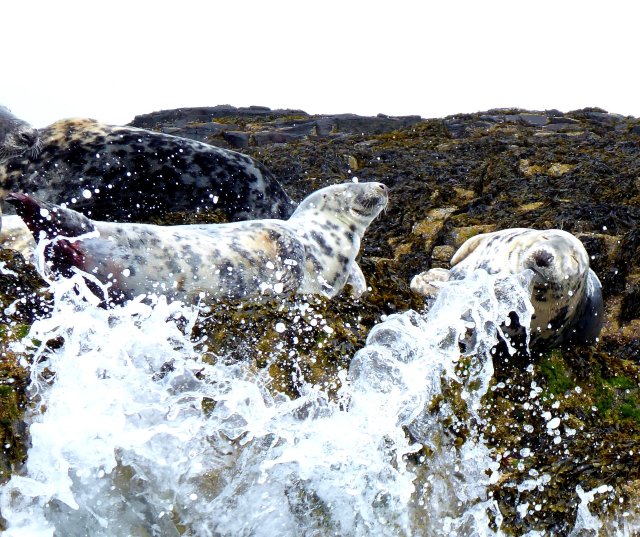 Finally, the trip lands on Inner Farne, where Arctic tern are nesting everywhere, even on the footpath, and protective parents fly up and pack at the heads of passers by.

Past experience means a) We were a hat. b) the hat was lined with cardboard!! Very effective peck protection. The stars of the show are always the puffins, and standing feet away from these stunning birds is such a privilege. I even managed a photo of one with sand eels in it’s beak!!

On our way back in the boat we were thrilled with what we had seen, when suddenly the captain asked if perhaps seeing some dolphins might be nice! Suddenly a pod of 5 were alongside us, racing the boat. What a brilliant end to the trip.

Our last day in England (!), we visited Bamburgh castle, again free with HHA. 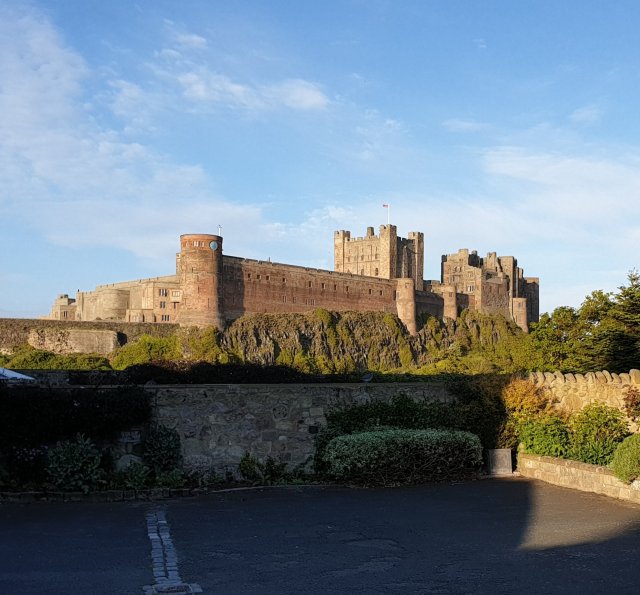 More austere than Alnwick, it is owned by the youngest generation of the Armstrong family, although they no longer live there. Essentially a Victorian reconstruction, on an ancient castle site, pretending to be an ancient castle! 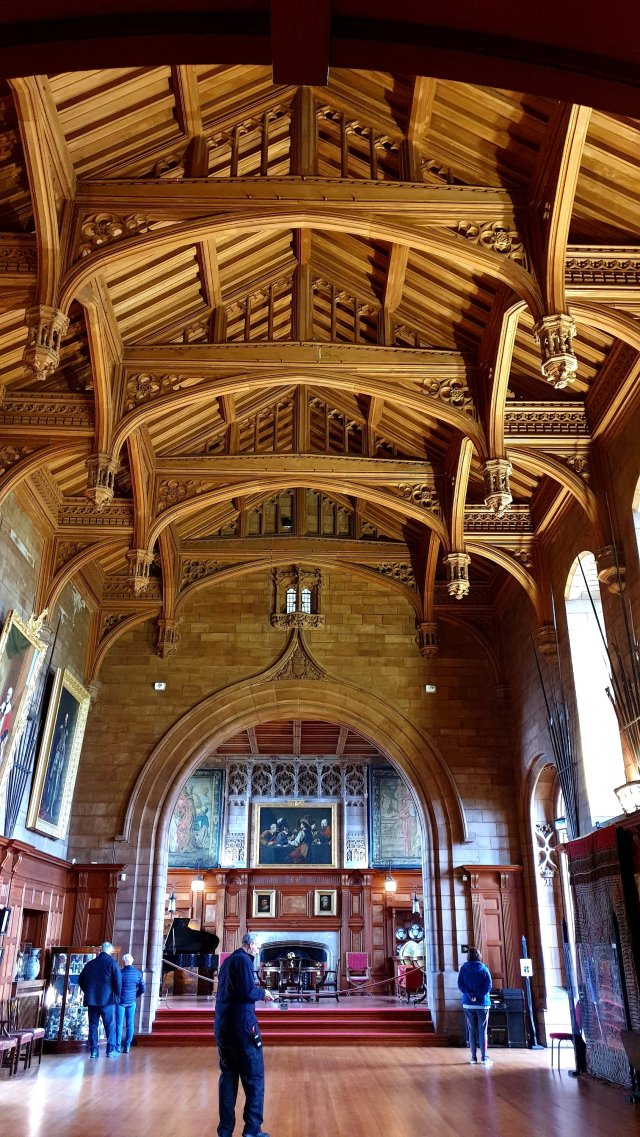 For us, the most fascinating part of the visit was learning about the first Lord Armstrong. He was an amazing inventor and pioneering industrialist.

He built Newcastle’s Swing Bridge and the hydraulic mechanism that operates London’s Tower Bridge. He created Cragside in Northumberland, the first house in the world to be lit by hydroelectricity. He was the Armstrong in Armstrong Siddeley and Armstrong Whitworth, and was involved in designing aircraft, cars and ships.

He was also a great philanthropist, and this role is carried on today.

Leaving Bamburgh, we drove north, crossing the border into Scotland and driving to St Abbs Head. 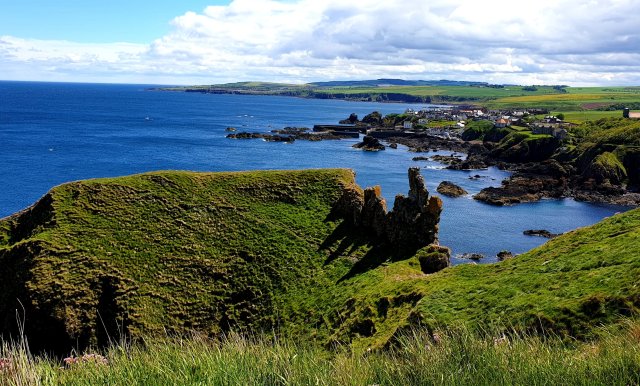 We then hiked the 5 mile circuit along the beautiful cliffs, again watching colonies of seabirds. There were a lot of ups and downs, and we were walking into a very strong headwind, so by the end we felt as if we had done at least 10, albeit very exhilarating, miles! 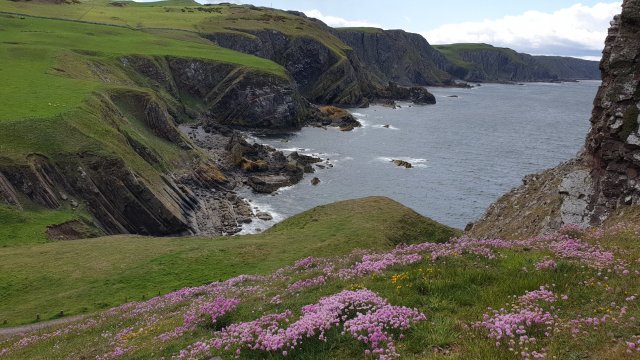 The weather on the east coast was deteriorating, so we decided to head inland and find some indoor pursuits for the next day. Filling up with fuel, we realised we were definitely in Scotland!

We drove to Dryburgh and found a super spot to wildcamp… a tiny, hidden car park near a huge statue of William Wallace. Not a sound all night!! Fantastic.